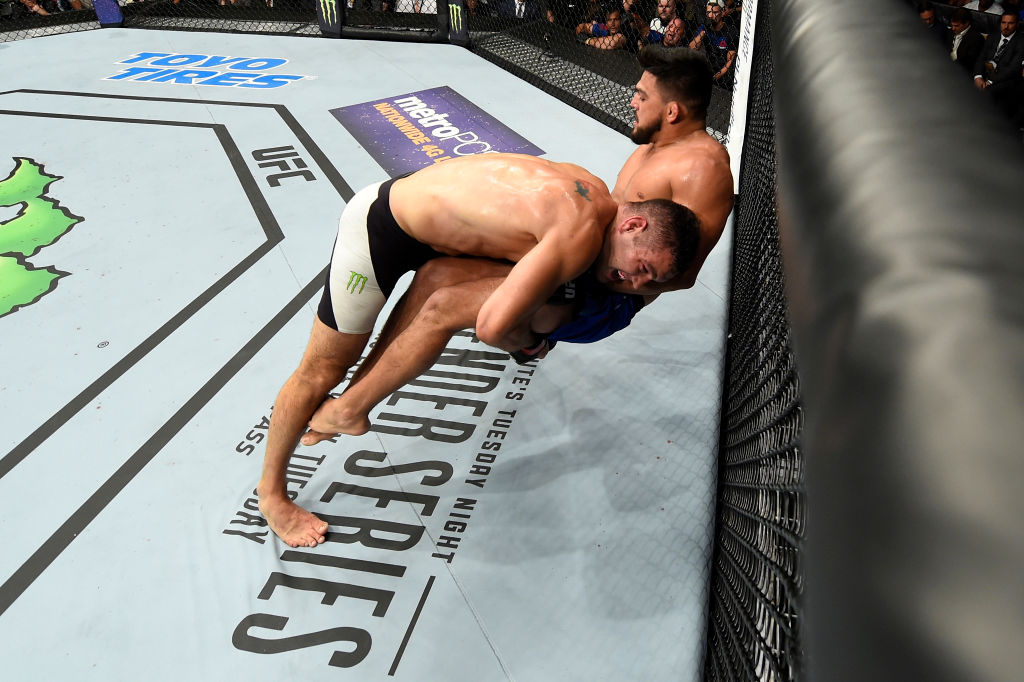 Chris Weidman</a> takes down <a href='../fighter/Kelvin-Gastelum'>Kelvin Gastelum</a> in their middleweight bout during the <a href='../event/UFC-Silva-vs-Irvin'>UFC Fight Night </a>event inside the Nassau Veterans Memorial Coliseum on July 22, 2017 in Uniondale, New York. (Photo by Josh Hedges/Zuffa LLC)" align="center" />WEIDMAN vs. GASTELUMhttp://www.ufc.com/news/UFN-Long-Island-2017-Main-Event-ResultsFormer UFC middleweight champion Chris Weidman picked the perfect time to snap his three-fight losing streak, as he fought for the first time in his hometown of Long Island Saturday night and submitted Kelvin Gastelum in the third round of their UFC Fight Night main event at Nassau Coliseum.

“I’m back, baby,” Weidman said. “I’m the champ and everybody knows it.”http://www.ufc.com/news/UFN-Long-Island-2017-Main-Event-ResultsThe victory was the first for the 33-year-old Weidman since his May 2015 win over Vitor Belfort.

Looks like @ChrisWeidmanUFC has a message for the MW division, and a particular British foe ... #UFCLongIsland pic.twitter.com/uWyZmT00Sd
— UFC (@ufc) July 23, 2017

After Weidman and Gastelum tried to find their striking range early in the opening round, Weidman got on the board first with a little over three minutes left thanks to the first of two takedowns. Gastelum was able to get free quickly from the first one, but Weidman took control with takedown two, nearly locking Gastelum’s arm up before the former Ultimate Fighter winner escaped and got to his feet with a minute remaining. Just before the horn, Gastelum responded, as he drilled Weidman with a left that put him on the seat of his pants. A furious follow-up barrage ended the round, but Weidman appeared to be unhurt as round two began.

A quick right hand by Weidman got Gastelum’s attention as the second began, and it allowed him to close the distance and put his foe on the deck. Gastelum worked back to his feet, but Weidman put him back down with a thud. Again, Gastelum got to his feet, but Weidman remained locked on, and he scored a third takedown. This time, “The All-American” was able to land several hard shots from the top position while keeping his foe grounded until the horn.

Gastelum came out winging bombs, but in that furious exchange to start round three, he suffered a flash knockdown. Moments later, Weidman rocked him again, but some stellar head movement kept Gastelum out of trouble. With just over three minutes left, Weidman broke up the brawl with a takedown, but Gastelum rose immediately. Unfortunately for the Arizonan, Weidman remained locked on him, and another takedown followed. This time, Weidman went on the attack for a submission, and he got it, with an arm triangle choke forcing Gastelum to tap out at the 3:45 mark and sending the Long Island fans into a deafening frenzy that welcomed Weidman back to the win column and sent a message to the 185-pound weight class.