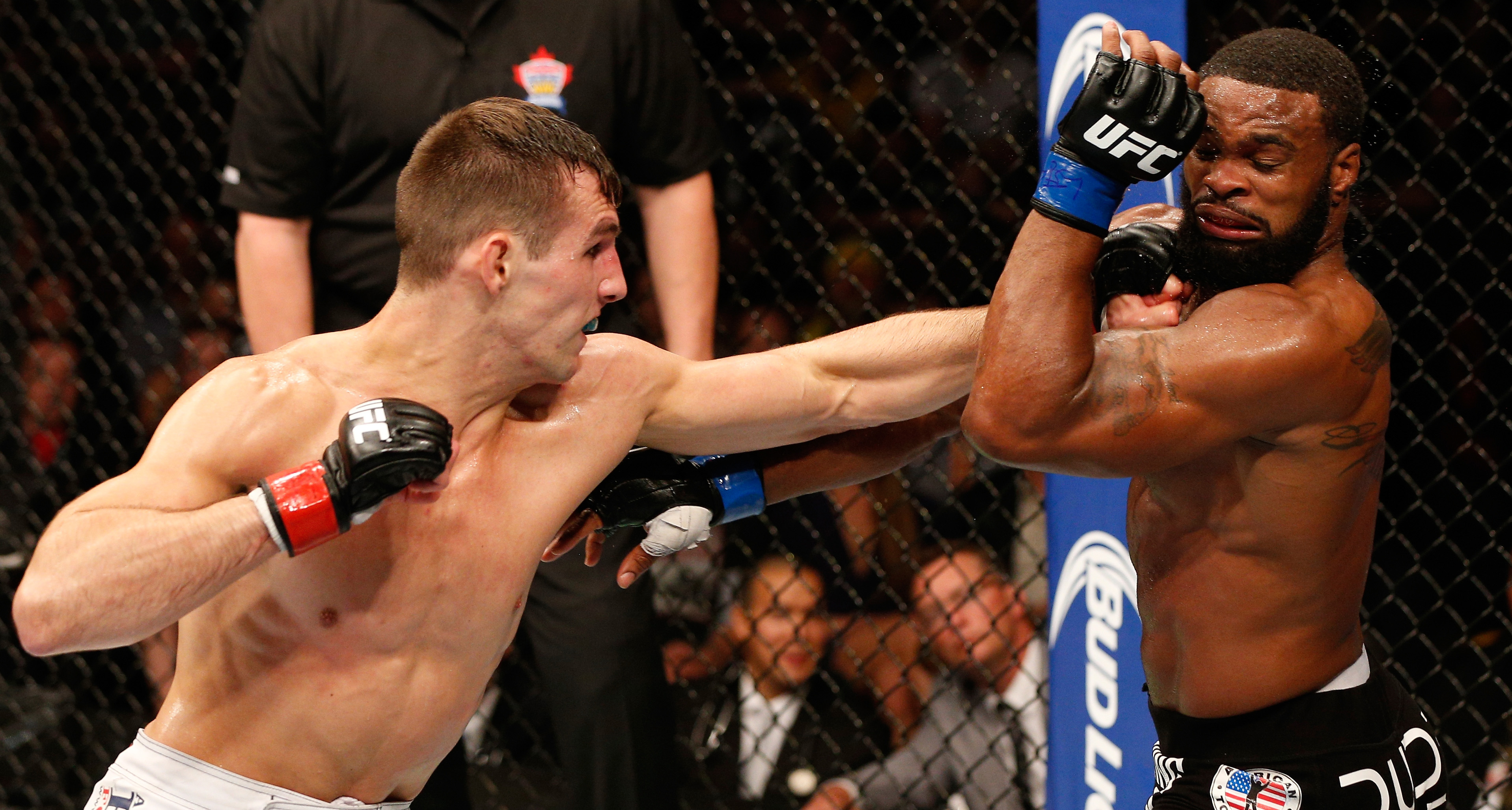 VANCOUVER, B.C., June 14 – If there were any demons left in Rogers Arena for Rory MacDonald - who lost the first fight of his career in this building to Carlos Condit in 2010 – he eliminated them completely Saturday night, winning a shutout three-round unanimous decision over fellow welterweight contender Tyron Woodley in the UFC 174 co-main event.

With Metallica’s “St. Anger” still ringing in their ears, the British Columbia crowd chanted MacDonald’s name as the bout began, and the Quesnel native got right in the pocket with Woodley, firing off hard jabs and the occasional kick while avoiding his opponent’s attempts to get the fight to the mat. With 90 seconds left, Woodley was able to score a brief takedown, but MacDonald wasn’t on the mat long, as he shot up immediately and went right back to work, finishing off the round with an impressive flurry to the body and head.

MacDonald kept his steady pressure on in round two, with Woodley rarely getting his back off the fence as the Canadian peppered him with punches to the head and body, as well as kicks that kept the St. Louis native from getting into any offensive rhythm.

Woodley came out on the attack in round three, knowing that he needed to turn things around in a big way. But after this initial burst of activity, Woodley was again with his back to the fence as MacDonald calmly worked his striking game. With three minutes left, MacDonald even scored a takedown on the former wrestling star, doing it almost more for emphasis than anything else, and with the clock winding down, MacDonald opened up with ground strikes to the head as the crowd erupted, putting a cap on a flawless win for the 24-year-old “Ares.”

What was expected to be a light heavyweight war instead turned into a wrestling clinic for Ryan Bader, who dominated his three-rounder with Rafael “Feijao” Cavalcante, winning a shutout unanimous decision. 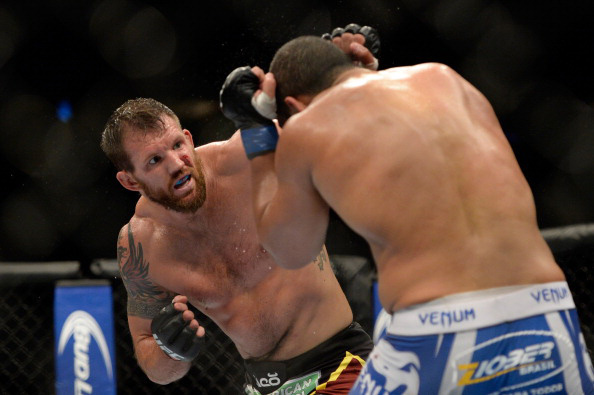 Bader mixed up his attacks nicely in the opening stanza, keeping Cavalcante guessing with his stand-up game and his takedowns while staying out of the way of the Brazilian’s bombs. On the mat, Feijao had no response for Bader, who drilled him with body shots while keeping him grounded.

Feijao tossed Bader’s first takedown attempt of the second round aside, but the Arizonan was undeterred, finally getting his opponent back on the mat in the second minute. He wasn’t able to keep Cavalcante down as long, but after a brief stretch standing, Bader floored his lethargic foe yet again.

After getting a stern talking to in his corner between rounds, Feijao finally went on the attack in round three, landing some solid shots while avoiding Bader’s first two takedown attempts. But with the third, the former Ultimate Fighter was able to avoid trouble and keep Feijao on the mat, wrapping up a clear-cut victory.

After last week's questionable decision in the Diego Sanchez-Ross Pearson bout, another disputed verdict was rendered, this time in the heavyweight division, with returning former UFC champion Andrei Arlovski taking a split decision over Brendan Schaub.

“There has to be some sort of major change with these judges," said Schaub. "I have no idea what they’re doing but clearly they weren’t paying attention to the fight. I know Andrei’s a big star and maybe they were swayed by the fans' reaction. Look at the punch stats and statistics then tell me that he won that fight. This started with the bad decision in the Diego Sanchez vs. Ross Pearson fight last week and I can’t believe it happened to me now. Maybe you can give Andrei the first round but that’s it. The most significant strikes he landed on me were the two head butts. I don’t know what else to say.”

Scores were 29-28 twice, and 28-29 for Arlovski in a verdict that wasn’t as egregious as Sanchez-Pearson, but bad enough to draw a negative reaction from the Rogers Arena crowd. 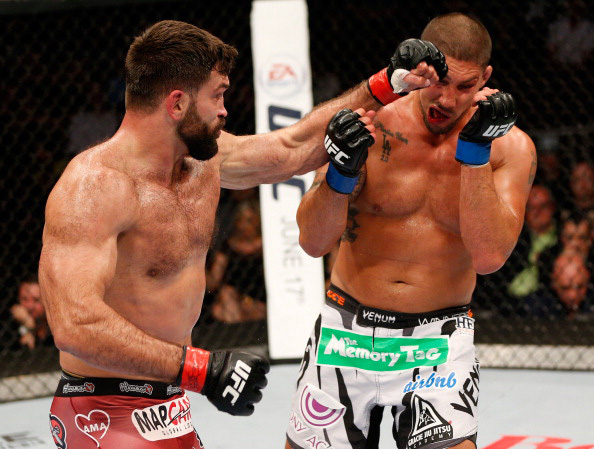 Arlovski closed the distance and bulled Schaub into the fence to start the bout, a strategy that produced boos almost immediately. After breaking, Schaub landed with an overhand right, but the two soon locked up again. Again getting loose, Schaub scored with another punch but missed a wild overhand right, but it didn’t matter much because Arlovski wasn’t doing much offensively other than clinching with his opponent and holding him against the fence.

The second round was similar to the first, with Arlovski again baffling with his lack of consistent offense while Schaub was at least attempting to land a fight-ending strike, though they were coming up empty as well. Arlovski did throw some bad-intentioned punches in the closing seconds, but nothing significant came of them.

A minute into the final round, Schaub scored with his first takedown of the fight, and he went to work with his ground strikes as he kept “The Pit Bull” grounded, with little significant effort from Arlovski to get back up until he rose with a minute left. By then, both fighters were spent and they locked up against the fence, but after breaking free for a final flurry of activity, Schaub was cut over the eye and his cheek and jaw were swollen, so apparently Arlovski did enough damage to convince the judges of his victory.

“My arms and legs were shaking during the walk out and the first round," said Arlovski.
"I was very excited but also very nervous to be back inside the
Octagon. It feels so good to be home. The reception I got from the fans
was incredible. It felt so great to be welcomed and appreciated by them
after so long. I definitely won’t forget this moment. My game plan was
to knock him out in the first round and really use my movement to open
up my punches. I wasn’t able to implement that plan the way I hoped to. I
wanted to move more but Brendan did a great job slowing me down. ”

Light heavyweight up and comer Ovince Saint Preux made in five straight in the main card opener, finishing Ryan Jimmo via verbal submission in round two.

Jimmo tried to get off to a fast start, but a flush left hand that bloodied his nose changed that plan in a hurry, prompting him to clinch with Saint Preux against the fence. After a long stalemate, the two broke loose and while Jimmo stayed busy with his kicks, another hard left and a late takedown by OSP likely sealed the round for him.

A slip to the mat in round two allowed Saint Preux to get the top position on Jimmo, and after moving into the mount briefly, he took Jimmo’s back and worked for an arm. He got it, and after twisting his opponent’s arm behind his back, Jimmo verbally submitted due to injury, with referee Kevin Dornan stepping in at 2:10 of the second.