With the electricity from UFC 239 still coursing through the MMA community, the third season of Dana White’s Contender Series returned on Tuesday following its one-week hiatus with another assemblage of hopefuls plying their trade inside the state of the art UFC Apex in Las Vegas.

After all five fights went to the cards last time out, four of the five bouts on Tuesday’s card ended inside the distance, leaving UFC President Dana White with a difficult decision to make…. or did it?

For the first time in franchise history, White handed out five contracts, giving each of the victors the opportunity to continue chasing their dreams at the next level.

“This is what this show was built and designed for,” he said. “I’m looking for killers and I saw five killers tonight.”

Training under former UFC fighter and respected grappler John Salter, Solecki put his own skills on the ground on full display in this one, taking Wallace to the canvas almost immediately. Every time Wallace looked to escape, Solecki was one step ahead, advancing to a better position or shutting down Wallace’s movement.

After taking the back and hunting for the rear-naked choke, Solecki shifted his focus and clamped on to a nasty arm-in guillotine choke, rolling through into mount and continuing to squeeze. Before Wallace could adjust or even think about tapping, he went to sleep.

All it took was one takedown for Trocoli to secure the finish, as the towering Brazilian hit a timely judo toss to put Bergh on the canvas.

The two spent the first couple minutes of the contest clinched along the fence, battling for underhooks and control position. When referee Chris Tognoni told them to stay busy, Trocoli flicked Bergh to the ground and immediately started looking for the submission. After initially threatening with an arm triangle choke, the six-foot-six light heavyweight, who suffered a severely broken foot on the first kick he threw of the evening, was able to climb around to the unbeaten Norwegian’s back, clamped on to his neck and twisted, drawing the tap.

Leg kicks have become a crucial weapon in the arsenal of fighters at every level, especially over the last couple years, and Tuesday night, Azure used them with great frequency and force on the way to handing Ocon the first loss of his professional career.

After landing double digit kicks to Ocon’s lead leg in the opening round, the MMA Lab product went right back to work early in the second, eventually taking the legs out from under the Nashville native. When Ocon stumbled, Azure pounced, climbing on the back and unloading with heavy punches while frequently trying to fish his arm through to secure a fight-ending choke.

Ocon survived the submission attempts to reach the third round, but Azure put him back on the canvas almost immediately, transitioning to the back where he once again went in search of a finish, but it wasn’t meant to be. Though he didn’t get the finish, Azure turned in an absolutely dominant performance to collect his seventh straight victory. 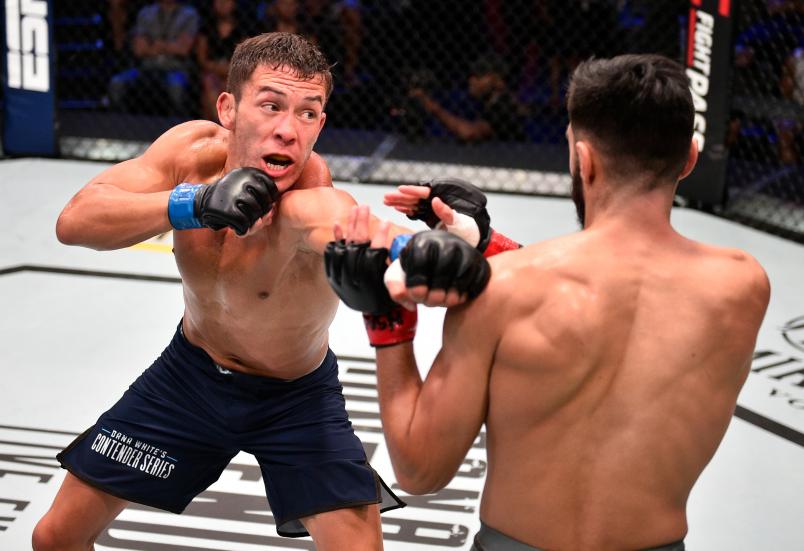 A shoulder injury scratched Pitolo from competing on the Contender Series last season, but he more than made up for it on Tuesday night, earning a first-round stoppage win over the returning Sumter.

Sumter connected with a long right hand that staggered Pitolo barely 10 seconds into the fight, but once the Hawaiian got his feet under him and went on the offensive, he was able to land. The first time he backed Sumter into the fence, Pitolo opened up with hooks to the body, and after putting his back on the wall again, he continued crashing home heavy shots to the midsection, eventually causing Sumter to collapse and referee Chris Tognoni to step in and stop the fight.

Official Result: Maki Pitolo def. Justin Sumter by TKO (strikes) at 1:37 of Round 1

The opening five minutes of this fight were largely give-and-take, as every time one would land crisp, the other would counter. It wasn’t until late in the frame that Rosales looked to steal the frame, dropping down for a slick takedown and cinching up a high-elbow guillotine choke attempt that he looked capable of finishing.

But Pearce survived and when the second round began, it was clear that the MMA Lab representative was the fresher of the two and the close contest turned into a lopsided mauling. Throughout the middle stanza, Pearce was on the offensive, punishing the exhausted Rosales, who showed tremendous heart and toughness to remain standing, but offered little in the way of offense.

Early in the third, Pearce put Rosales on the canvas and went searching for a finish. After a little back-and-forth grappling as the two battled for position, the 27-year-old dumped Rosales to the ground, passed the legs to the side and connected with a clean right hand that brought the fight to a close.

Official Result: Jonathan Pearce def. Jacob Rosales by TKO (strikes) at 1:50 of Round 3