Here Are The Final Results From The First Contender Series Fights At The UFC Apex
By E. Spencer Kyte • Jun. 18, 2019

The third season of Dana White’s Contender Series began this week in a new barn and featuring a couple different firsts.

Unfortunately, the initial memorable moment of this season came on Monday, when the welterweight clash between Leon Shahbazyan and Brok Weaver was called off as Shahbazyan was deemed ineligible to compete due to illness, marking the first time a bout had been scratched from the Contender Series.

But on Tuesday, it was all positives, as the series shifted from the Ultimate Fighter gym to the brand new UFC Apex, a state of the art live event and production facility. And when the action kicked off, the four bouts fell right in line with what fans have come to expect on the Contender Series.

After 39 contracts were handed out over the first two seasons, Season 3 kicked off with two of the four victors earning a shot to compete inside the Octagon, as heavyweight Yorgan De Castro and middleweight Punahele Soriano impressed UFC President Dana White enough to become the first two competitors to graduate to the biggest stage in the sport this season.

Here’s a look at what transpired on Tuesday night at the UFC Apex.

Yorgan De Castro def. Alton Meeks by TKO (leg kick and punches) at 4:45 of Round 1

Inside the stunning new UFC Apex facility, undefeated heavyweights with dreams of competing inside the Octagon kicked off the third season of Dana White’s Contender Series, as Massachusetts native De Castro lined up opposite Meeks, a former Division I football player with three quick victories since turning pro last July.

While Meeks quickly closed the distance and looked to turn this into a wrestling match, De Castro greeted him with a flying knee on his first entry and did an excellent job getting back to his feet and defending along the cage. Once they reset into space, De Castro started attacking Meeks’ lead leg with heavy kicks that clearly bothered the unbeaten hopeful.

Although Meeks continued to press forward, it was De Castro who was consistently connecting with the most impactful offense, landing another flying knee and then felling Meeks with another thunderous kick. A quick flurry of hammerfists followed and referee Mark Smith was forced to step in and wave off the contest, bringing the first fight of Season 3 to a close before the opening round was over.

De Castro's effort was the only finish of the evening, and was enough to earn him a UFC contract. 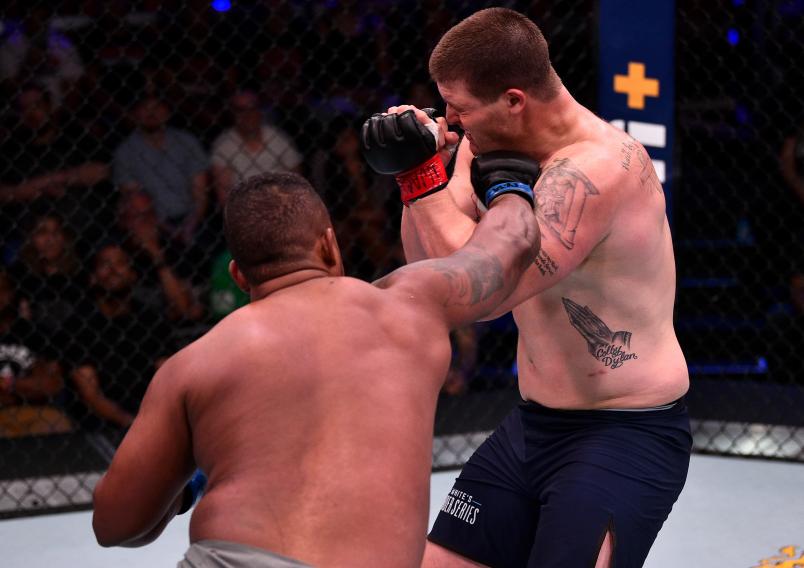 Regional veterans that many felt should have garnered a chance to compete at the highest level already clashed in the second bout of the night, with Ring of Combat and CFFC veteran Algeo taking on England’s Loughnane.

While the former has already shared the cage with a pair of current UFC featherweight stalwarts, the latter actually had a cup of coffee in the big leagues back in December 2012, dropping a unanimous decision to Mike Wilkinson in his sixth professional bout.

There weren’t many quiet moments of inactivity in this one. Instead, the friendly featherweight veterans got after it from the outset, slinging punches and kicks and elbows and knees in an action-packed, back-and-forth fight.

Loughnane got the better of things in the first, using a series of low kicks to force Algeo to shift stances and keep him guessing, opening up opportunities for the Alliance MMA product to get loose with his hands. In the second, Algeo started to have more success, finding a home for long strikes and busting up Loughnane’s nose, only to have the former TUF: Smashes competitor squeeze a couple of takedowns and a brief back take in for the judges to consider as they were handing out their tens and nines.

Early in the third, Loughnane pressed forward and started piecing up the Pennsylvania product, chasing heavy right hands with piercing jabs and chopping kicks. While Algeo tried to respond, Loughnane continued to connect with force, unbothered by the offense coming his way en route to closing out the contest with the most decisive round of the 15-minute affair. 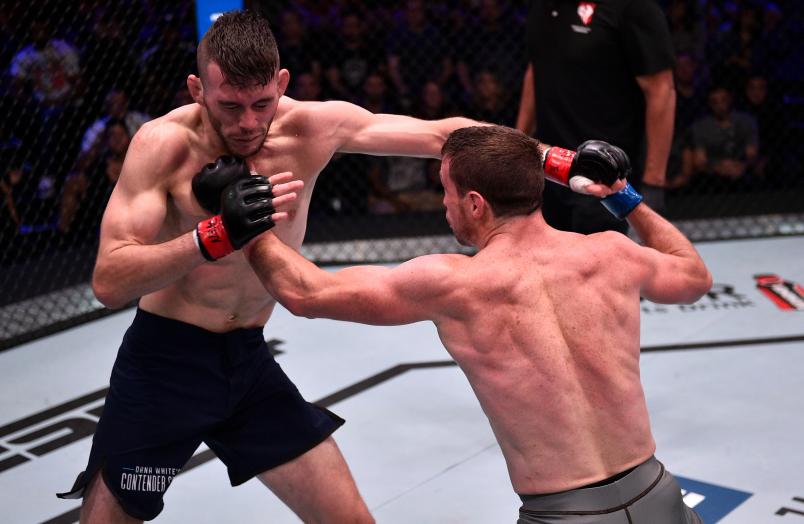 Season 3 of Dana White's Contender Series Debuted In The New UFC APEX. Check Out The Story Of This Incredible Facility

Over the first two seasons on the Contender Series, three of the four women who have stepped into the cage and earned victories have been awarded contracts, while the one unsuccessful victor, Jamie Colleen, returned in Season 2 and was beaten by one of the series’ top graduates, Maycee Barber.

Tuesday night, Robbins and Goldy looked to add to the high female success rate right out of the gate in a battle between an experienced veteran and an impressive upstart looking to take a major step forward in her career.

For the majority of the opening round, Goldy was the one dictating the terms of engagement, moving backwards and catching Robbins as she came forward. Although Robbins landed a couple sharp overhand rights and had a brief moment of success when she got inside and looked to wrestle, Goldy did a very good job of getting back to her feet and avoiding any real trouble on the ground.

It was more of the same in the second, with Goldy dominating the exchanges and connecting with knees, elbows and kicks off the break whenever she clinched up with Robbins. Late in the frame, Robbins got a little desperate and dove on a leg, initiating a scramble in search of an opening, but she simply didn’t have enough time to do any real work.

Robbins found a little more success early in the third, pressing forward and connecting with greater frequency than she did over the first 10 minutes, but Goldy wasn’t fazed. She remained in constant motion, countering when the opportunity presented itself, landing at a higher clip. Down the stretch, the Florida-based single mother really opened up, stinging Robbins with punches and kicks, chasing her to the ground with hammerfists as the final horn sounded.

This was a strong showing for the unbeaten hopeful who pushed her record to 5-0 with a clean sweep of the scorecards. 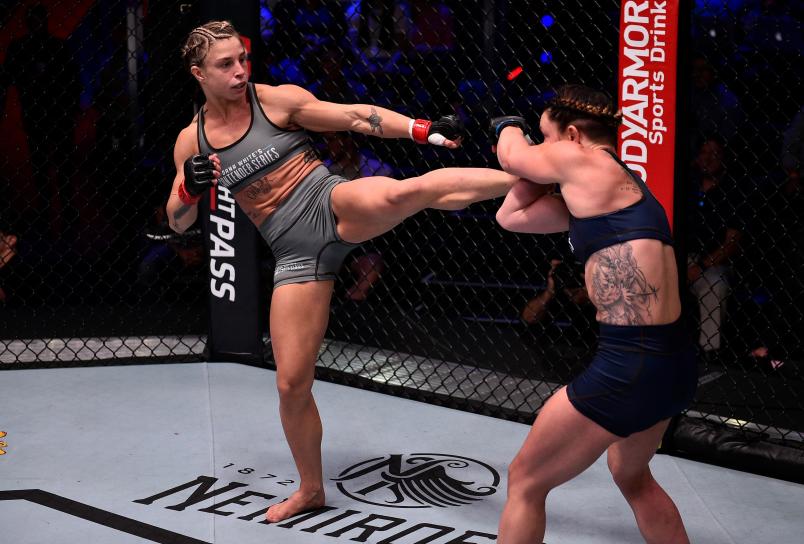 The first main event of the season was contested in the middleweight division, as the 26-year-old Hawaiian Soriano took on North Carolina’s Pickett, who lost to Charles Byrd in the second fight in Contender Series history.

Early on, Pickett did a good job of using his reach advantage and maintaining distance, sniping with long right hands. But after finding his range, Soriano started to have success, pressing forward, eating shots and countering with powerful punches that had Pickett on the ropes and retreating as the first round came to an end.

The second round began much like the first, with Pickett working from range, keeping Soriano on the end of his long, clean punches. Getting touched up prompted the Hawaiian to turn to his wrestling for the first time in the fight, as he was able to get inside, elevate Pickett and put him on the canvas, duplicating the feat at the close of the round.

Early in the third, Soriano timed an entry perfectly and double-legged Pickett to the canvas, ending up in half guard with four minutes to work. Pickett attempted to attack a kimura, but couldn’t lock it up and wound up with his back on the canvas again. After offering very little offense through the first three minutes on the ground, Soriano finally started letting loose with left hands to the body over the final 60 seconds, salting away the victory.

Despite being disappointed with his own effort, Soriano's performance impressed the right people, and he goes home with a UFC contract.