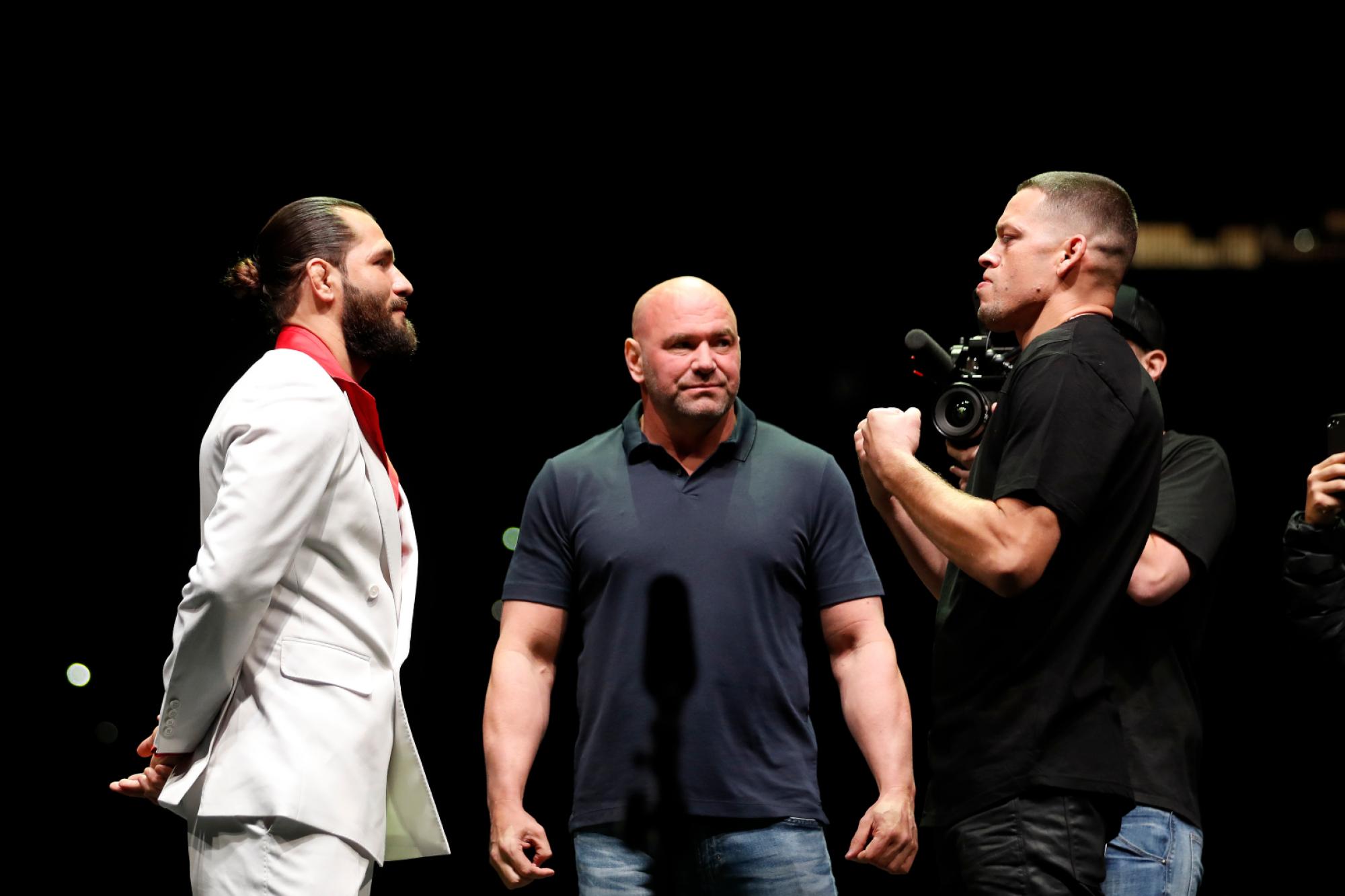 Respect Between The Two Baddest

Recap the discussion between Jorge Masvidal, Nate Diaz and the media during Monday's conference call
By E. Spencer Kyte, on Twitter @SpencerKyte • Oct. 28, 2019

Saturday night in New York City, Nate Diaz and Jorge Masvidal headline UFC 244 at Madison Square Garden in a welterweight clash with a unique belt hanging in the balance.

While neither man enters with UFC gold around their waists, the promotion has created a new belt for the occasion, “The BMF Title,” which means exactly what you think it does and will be bestowed upon the winner.

Although some have scoffed at the creation of a new title that isn’t expected to be defended in the future, Diaz and Masvidal have long considered themselves amongst the top contenders for such an honor, belt or no belt, and are looking forward to facing one another on Saturday night to determine who is the baddest in the game.

“My brother’s not in the game right now, so I’m going to go and take over that position until he’s back in,” said Diaz, always deferential to his older brother, Nick, whom he has always considered the best fighter in the sport and has been a massive influence on his mixed martial arts career.

“Jorge has been around as long as me,” continued Diaz, who called for a bout with Masvidal following his brilliant performance against Anthony Pettis at UFC 241 back in August. “He’s been a real fighter and stayed who he is the whole time and that’s the baddest m*****f****** s*** there is.

“I called it how I see it and everybody else felt the same way, so this is for the best fighter in the whole game.”

A 16-year veteran who has long been respected by his peers and the hardcore set, Masvidal has used 2019 as the year he breaks into the mainstream.

In March, he ended a 16-month hiatus and survived a first-round knockdown to stop Darren Till midway through the second round of their main event clash in London, England. Four months later, “Gamebred” ended Ben Askren’s 21-fight unbeaten streak, connecting with a flying knee and a pair of “super necessary” follow-up blows that brought the fight to a halt in five seconds.

“It’s awesome,” Masvidal said of Diaz publicly praising his efforts against Askren and acknowledging him as a kindred spirit during his post-fight interview at UFC 241 in Anaheim that planted the seed that grew into Saturday night’s main event.

The 34-year-old American Top Team representative recounted the circumstances surrounding Diaz’s short-notice bout with Conor McGregor at UFC 196 as an example of why he’s always had a great deal of respect for his opponent this weekend.

“That, to me was like, hell yeah, this is a dude I definitely want to scrap with just because of the mindset,” Masvidal said. “He’s always betting on himself and I love that s***. I love to compete against those guys. That’s who I’m trying to fight is those dudes right there.

“I think it just comes down to we both fight and we’re dogs in that cage, but at the same time, we see the bulls*** and we don’t want to play in the bulls***,” he said when asked about the origins of the obvious respect between he and Diaz. “On the same token, he’s the same dude from his side of the country — doing his thing his own way. We both see it and we can salute each other.

“We’re going to go to war, but no matter what happens, I’ve got nothing but praise and admiration for Nate. I like what he’s done and how he’s carried himself. Kudos to him, now let’s get this fight s*** going on.”

While Diaz has been a main event fixture and a major fan favorite throughout his UFC career, Masvidal has been more of an indie darling — a fighter who has been respected by both his peers and the hardcore set, but who has never had that mainstream, crossover appeal.

“The purists have been watching me since Japan, since Strikeforce, since all these events that are no longer with us that are defunct already that your boy traveled through those events and made waves,” said Masvidal, who logged appearances with BodogFIGHT, Strikeforce, World Victory Road and Bellator, amongst others, before making his Octagon debut against Tim Means on April 20, 2013. “It’s crazy that I’ve had the hardcores and then in one year, I’ve brought in the casuals.

“It’s funny to see a casual say I’m an overnight hit and I just watch him get chewed up by all my fans that have been there forever,” he added with a laugh.

In a sport where post-fight conversations often center on where a combatant fits in the pantheon of all-time greats or how the current pound-for-pound rankings line up, Saturday’s event takes one of those nebulous concepts everyone talks about and puts it on the marquee, with two deserving competitors vying for a one-off title that will be presented by Hollywood superstar Dwayne “The Rock” Johnson.

And Diaz and Masvidal clearly bought in long before this bout or the BMF title were ever a reality.

“My brother used to show me Royce Gracie taking out everybody in the UFC and we’d be like, ‘This is the baddest m*****f***** right here!’” Diaz said, beginning a recollection of past holders of the title he and Masvidal are set to battle for this weekend that included Mike Tyson and Rickson Gracie. “I think it’s already set it stone: I’m the baddest m*****f***** and he’s the runner-up; we’re the guys.

“The whole company is saying that the winner of this is the baddest m*****f***** that they’ve seen on their roster in the years of the company running, the history of the company,” added Masvidal. “I don’t think I could elaborate on that any more.