Renzo Gracie Featured in Latest Edition of Pioneers of MMA 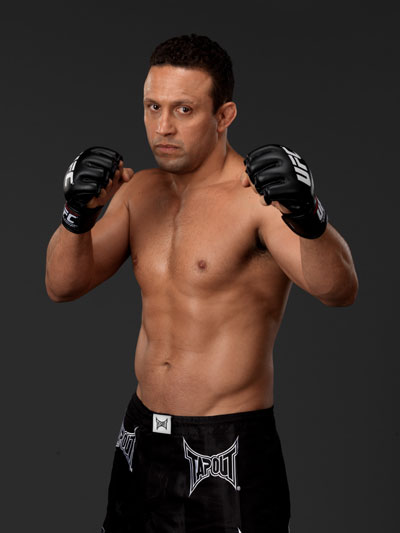 The latest episode of the UFCFIGHTPASS.com original series Pioneers of MMA is now is now live on FIGHT PASS.

This month’s edition focuses on the enormous contributions Brazilian Jiu-jitsu legend RENZO GRACIE has made not only to the sport of MMA as both a practitioner and coach, but also to the Gracie family legacy.

Considered by some to be the most complete mixed martial artist the legendary Gracies ever produced, Renzo Gracie defeated five UFC champions during a career which straddled the no-holds barred and modern MMA eras. Featuring exclusive interviews with Gracie and some of his most famous students – including Matt Serra, Chris Weidman and Frankie Edgar - plus rare archival footage, this FIGHT PASS original program is the definitive retrospective of a true MMA innovator.

Born in 1967 to the famous fighting family of Rio de Janeiro, Brazil, Renzo is the grandson of Gracie Jiu-jitsu founder Carlos Gracie and the son of the highly respected BJJ black belt Robson Gracie. With that kind of pedigree, it seemed obvious that Renzo would go into what had become the family business, but as he explained in Pioneers, he initially had other ideas.

Renzo said: “I first stepped on the mat at five, and I had my first competition at seven. I trained until nine at night, seven days a week, even when I got into my teenage years and wanted to (party). I would train until 9pm on a Friday night, then go out with friends, and then be back on the mat the next morning.

“One day I was sitting down with my grandfather and I told him I was planning to become a lawyer. He looked at me and said ‘No, you are going to be a jiu-jitsu teacher - that’s your job!’ and that was the last time I thought about being a lawyer.”

Instead, the young Gracie became a coach and fighter in embryonic sport of mixed martial arts. He actually fought professionally almost two years before his cousin Royce would help usher in a new era of martial arts by winning the inaugural Ultimate Fighting Championship tournament in November 1993. Fighting on New Year’s Day, 1992, Renzo defeated opponent Luiz Augusto Alvareda by choke.

A few years after that, Renzo moved to New York with the mission of establishing Gracie Ju-Jitsu on America’s East Coast while continuing to use MMA fights to showcase his skills.

He recalled: “I never thought I’d leave Brazil, I love it there. But I came to New York and never left. I knew this is where I had to be, there were so many cultures here that I could teach Gracie jiu-jitsu to. It was tough at first; it was just me, I was teaching students, looking after the gym, being a father and provider, while at the same time trying to train for fights. But, at that time, I only had white belts so I was training with white belts to prepare for professional MMA fights.”

Despite that, Gracie went unbeaten for seven years and 11 fights, beating former UFC tournament champion Oleg Taktarov, world boxing champion James Warring and appearing on the huge PRIDE 1, 2 and 8 cards in Japan along the way.

“I was there during the era from when the sport was called No-Holds Barred through to it becoming modern mixed martial arts,” Gracie said. “I fought them all.”

Gracie would defeat five UFC champions in his career (Taktarov, Maurice Smith, Pat Miletich, Carlos Newton and Frank Shamrock) and engage in some memorable battles. The August 2000 war at PRIDE 10 with Kazushi Sakuraba is still talked about with reverence by long-time fans; it was a great back and forth battle until Gracie was caught in key lock by the Japanese icon but, despite his elbow being dislocated, the Brazilian refused to tap.

Of the battle with “Saku”, which he lost due to referee stoppage, Gracie recalls: “I always thought that there was nothing that could make me submit. But I wasn’t sure. I’d never felt that sort of pain, I had never been caught in a submission I couldn’t escape. Let me tell you, the pain I was in (in that hold) was the worst pain I’ve ever felt in my life. But I found out that I could survive and that my mind was stronger than my body.

“I am very proud of that fight. It was a beautiful lesson. I took that experience back to my students and now when I tell them you should never give up on yourself, that there’s a way to come back always, they believe me because I was in that situation. Sakuraba is my brother, he is a great fighter and a great, sweetheart of a man. I am proud to call him family. He is the Japanese Gracie.”

In the closing fight of his career, Gracie finally entered the house build by his cousin Royce. He was 42 and hasn’t fought in almost three years, but wanted to fight in the UFC, if only once.

“The one fight I had at UFC 112, against Matt Hughes, I don’t regret,” he said of that painful third round stoppage in Abu Dhabi. “I always wanted to fight in the UFC, and I don’t regret fighting in the UFC at the end of my career against a legend in Matt Hughes.”

Of course, even during his active career, Gracie was already world-famous as an outstanding grappling coach. Elite MMA fighters like Georges St-Pierre, Roy Nelson, Matt Serra, Chris Weidman and Frankie Edgar have all learned at the feet of the master.

In the Pioneers episode, Serra, Weidman and Edgar all attribute their UFC world title wins to the techniques and self-belief that Renzo Gracie instilled in them during long hours on the mat of the infamous New York dojo.

“I am still contributing to the sport,” Gracie said. “I knew Chris Weidman would be UFC champion the first day I met him. I’m happy I am still giving something to MMA. It is an amazing sport.”

A trailer for the documentary retrospective on the BJJ specialist can be found here.

The full episode of Pioneers of MMA: Renzo Gracie can be found here.