Renato Moicano was hanging out with his wife and son at his sister-in-law’s house in Brazil, enjoying some down time after his win over Alexander Hernandez at UFC 271 in Houston, Texas. He told them there wasn’t a place in the world he’d rather be and meant it whole-heartedly.

And then he got a phone call.

Rafael Fiziev was out of his matchup with Rafael Dos Anjos, and UFC matchmakers needed a new opponent for the former lightweight champion. Moicano, whose second-round stoppage of Hernandez was his third win in four fights since moving up to lightweight, plainly could not turn down the chance to fight someone inside the Top 10 in a co-main event at UFC 272. The next thing he knew, Moicano was on a flight to Las Vegas.

“I really don't know why the UFC picked me, but I'm very thankful to be able to be here and represent the UFC, my country, my city, my team,” Moicano said. “I'm gonna put on a show to the fans.”

Initially, Moicano worried his decision was a selfish one. Training at American Top Team, Moicano doesn’t get much time with his family, and he misses them dearly. After his fight in Houston, he told UFC.com the first thing on his post-fight to-do list was to FaceTime his wife and son. After some thought, however, Moicano knew taking the fight against Dos Anjos was not only a great opportunity for himself, but also for his family.

“It’s because this is for them, too,” he said. “It's because I know that this will make a difference in our future, and in my coaches' and friends' future, as well.

“I don't think that this is a selfish decision because I took it after talking a lot to my family. My wife was the first one to say, ‘Go, you should fight. It's a great opportunity and we will have time to enjoy things later.’ She encouraged me a lot. She trusts me, and that's what matters.”

Having that spousal support certainly helps, but the fight presents plenty of motivation in and of itself.

Dos Anjos looked strong in his return to 155 back in November 2020, defeating Paul Felder (who also stepped in on five days’ notice), but Dos Anjos hasn’t seen action since. A matchup with Islam Makhachev was teased but never came to fruition. What was originally a February main event against Fiziev fizzled out first because of Fiziev’s visa issues and then because of a COVID-19 diagnosis.

Dos Anjos wanted to keep the date, and so now he fights his fellow Brazilian. For Moicano, though, he’s less caught up in the specter of fighting RDA and more enticed about the chances a win on March 5 could provide. 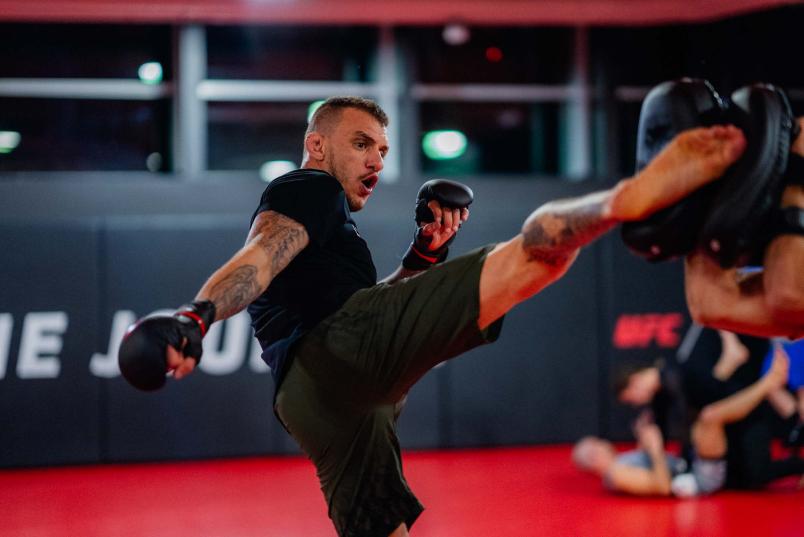 “It's not because it's RDA,” Moicano said. “To me, it doesn't matter. It's always good to fight ranked opponents, get these chances. But, for me, it is about going there, having a great performance, winning and putting some money in my pocket. Doesn't matter who I fight, I always want to win both checks. That's what I'm here for.”

Moicano seems to be rounding into the best form of his career. He was already one of the better featherweights, but the move up to 155 appears to have worked out for the best. A win at UFC 272 catapults him into the shark tank that is the Top 10 at lightweight. He understands those stakes, and he also carries the emotions and expectations of his friends and family into the Octagon.

Fresh off the plane!! @moicanoufc is in the building!!! #UFC272 pic.twitter.com/rtQT9ztLyy

Those don’t come as a burden for Moicano, though. He is eager to represent his loved ones, and when he makes the walk at T-Mobile Arena on March 5, he’ll do so with the respect and admiration of his peers in tow.

“This is going to show to other fighters and the UFC that I have my word,” Moicano said. “I'm here for my family, but also for the company. I believe this win will put me in the spotlight in the weight class. My prediction is that it's going to be a great fight and that, no matter what, I'll have my hand raised in the end.”