Renato Moicano To Make A Statement

Renato Moicano enters 2020 in a new divison and is ready to make a statement. It all starts at UFC Brasilia against Damir Hadzovic.
By Zac Pacleb, on Twitter: @ZacPacleb • Mar. 12, 2020

Fighting in his hometown of Brasilia for just the second time as a professional, Renato Moicano has eyes on making a strong declaration on March 14.

“I want to make a big statement and show to the 155ers that there is a new guy in town,” he said.

Moicano, who fought in UFC’s featherweight division since 2014, decided to move up to lightweight after suffering back-to-back TKO losses in 2019. It’s a move that didn’t come with some apprehension and consideration. Each of Moicano’s three losses came against former title challengers (Brian Ortega, Chan Sung Jung) and longtime featherweight king Jose Aldo.

While Moicano admitted he felt “a little afraid” about the decision, he ultimately knew the cut to 145 pounds was doing more harm than good in terms of his health. At 5-foot-11, Moicano was a taller fighter for the division and his frame should be able to translate physically to the 155-pound division. He added that he is “used to that weight class” because of his training partners at American Top Team and the move has allowed him to tailor his training camp more toward sharpening his game.

“I focus on my resting, my diet, how I approach martial arts,” Moicano said. “I started to work on things I wasn’t working anymore, so it was like a recovery of the old Renato Moicano.”

Whereas the physical aspect of moving up a weight class comes with some relief, the Brazilian is feeling the mental benefit that accompanies the decision.

“The mind aspect is really important too because you have to enjoy what you are doing, so you have to focus on the training and the fight,” he said. “But I have to do the diet for lightweight, too, because I am a tall guy, so it’s less damage to the body, and I think the new-age fighters, the new-era fighters, they started cutting less weight than they did before.” 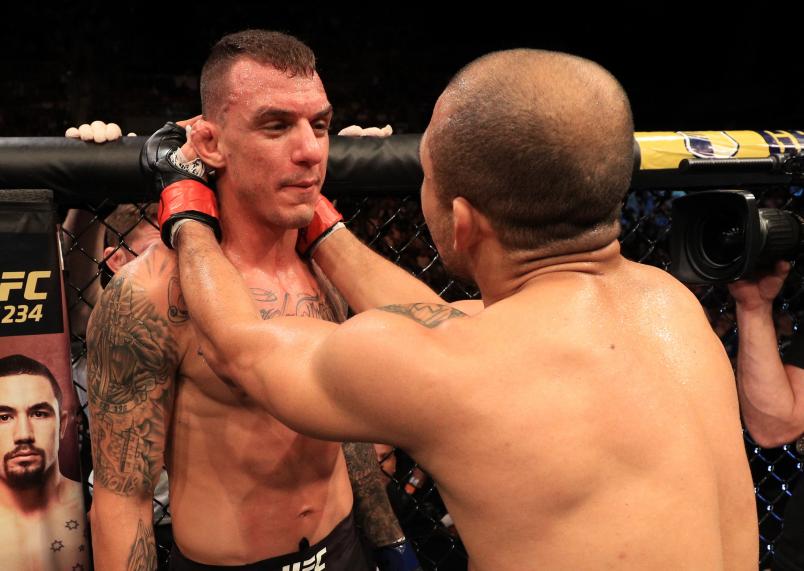 The lightweight division has seen a handful of notable careers energized by a move up 10 pounds, including Dustin Poirier, Dan Hooker and Charles Oliveira. Moicano, whose bread and butter is his submission game, is keen on his ability to follow in those athletes’ footsteps.

Although Moicano said getting to 155 pounds is easier, he does still need to maintain a diet, and he is insistent that just because he’s not cutting an extra 10 pounds, that doesn’t mean he’ll look any less fit come fight night.

It wasn’t long at all when Moicano was streaking up the featherweight rankings and in the mix for a shot at gold. On Saturday night, he has the chance to reestablish himself as one of the more dangerous fighters on the roster in one of the most exciting divisions UFC has to offer.

“I know I am one of the best fighters in the world,” Moicano said. “One day, I want to be the champion, and I want to prove I am number one.”