"People recognized me more in the streets and I’m giving a better life to my family." - Renan Barao 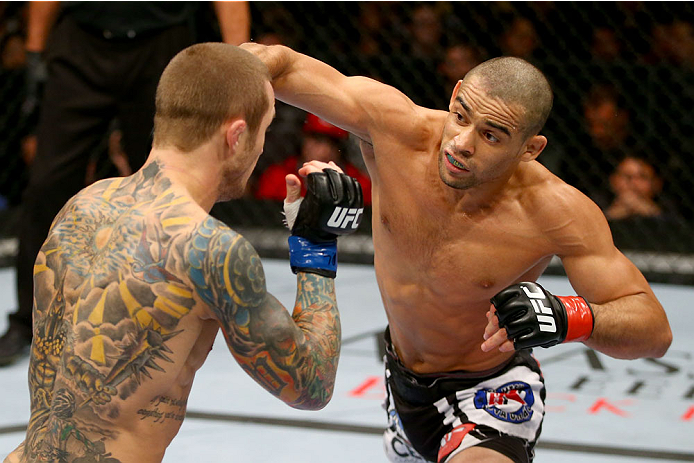 All you needed to know about Renan Barao’s feelings regarding his elevation from interim to undisputed UFC bantamweight champion came when he was asked for his reaction to the news he received earlier this month.

“Amazing,” he said, before adding, “However, I really want to fight Dominick to prove all I can do and that I’m the real champion.”

Dominick is Dominick Cruz, the UFC’s first bantamweight champion and the man who held it until two knee surgeries followed by a groin tear prompted him to relinquish the belt after being on the sidelines since his October 2011 win over Demetrious Johnson. For a little reference point as to how long that’s been, consider that Johnson, now the UFC flyweight champ, has fought six times in that time frame.

Barao has been only slightly less active, competing five times since Cruz’ last bout. Three of those bouts were contested for the interim bantamweight belt created in Cruz’ absence, and Barao has looked better and better with each win, defeating Urijah Faber, Michael McDonald, and Eddie Wineland. His next foe was scheduled to be Cruz in a highly-anticipated UFC 169 main event that would unify the belt. But after his latest injury, Cruz was forced to withdraw from the bout, giving up his title in the process. For Barao, it’s an official confirmation that he is the best bantamweight in the world and the legit champion. But at the same time he admits that the one fight he still wants is against “The Dominator.”

“It was a little bit disappointing, yes,” he said of the cancellation of the Cruz bout. “I want that fight to happen. I hope he has a good recuperation and gets back to training as soon as possible.”

Given Cruz’ determination to get back to life as an active duty fighter, expect that this fight with Barao will eventually happen. But in the meantime, there’s still the business of this Saturday’s UFC 169 main event, and for the newly undisputed 135-pound king, that means a date with the man he beat for the title in July of 2012, Urijah Faber.

Their first fight, at UFC 149 in Calgary, was a clear victory for the 26-year-old Barao, and while he says that his fights are “always hard, talking about Faber is harder.”

Faber isn’t the same fighter he was back then though. Since losing to Barao, he’s won four straight, three by submission, and he’s finished top-level foes Ivan Menjivar, Scott Jorgensen, and Michael McDonald, only going the distance with Iuri Alcantara. Barao has been paying attention, and he’s been impressed.

“I think he has more motivation now and (Team) Alpha Male is doing a great job as well,” he said. “I respect them.”

Barao hasn’t sat idle either, defending his title impressively while also getting used to life at the top of the UFC. Needless to say, it’s been a life-altering year and a half, but in a good way.

“People recognize me more in the streets and I’m giving a better life to my family,” he said of his reign as champion, and as he looks to defend his belt for the third time, the hard work is just beginning.

“I have a great team behind me with great fighters with different skills,” said Barao. “Some of them are good in boxing, others in Muay Thai or jiu-jitsu. I do lots of training, respect all my opponents, listen to my coaches, Dedé Pederneiras and Jair, and to know all shortcuts from the Octagon I have José (Aldo) by my side.”

Aldo, the UFC featherweight champion, will be even closer with Barao this time around, as the Brazilian standouts will be in this Saturday’s co-featured bouts, with Aldo defending his crown in the co-main event against Ricardo Lamas. It’s almost a full circle night for the two friends and training partners who came up the hard way in Rio de Janeiro’s Nova Uniao gym. But more than being an emotional time for Barao to reflect on, it’s one that is still strictly business, a reality he and his teammate share.

“We push each other to the top,” said Barao, who, like Aldo, keeps that hunger despite already being there.