"I’m really happy to be recognized as one of the pound-for-pound best in
the sport." - Renan Barao

The action that takes place under the bright lights of the Octagon has become the most frequently viewed spectacle in all of combat sports, and the athletes responsible for that action have come to be recognized as a dedicated and talented collective. While the sport has risen into the mainstream over the past decade, a handful of fighters have elevated to great heights and carved out a place atop the proverbial mountain where the best of the best call home.

While Renan Barao is certainly enjoying the status that comes with being seen as one of the pound-for-pound greats, the larger scale of building a higher profile is still a work-in-progress.

Although his incredible 35-fight unbeaten streak and bantamweight championship credentials qualify the 27-year-old for membership in one of the most exalted yet elusive clubs in MMA, the Nova Uniao product is still behind his peers in the realm of name recognition.

Where other marquee names on the UFC roster are quick to get fight fans’ attention, the Natal native is still on the verge of breaking through into superstardom. Nevertheless, these lingering circumstances aren’t enough to take the ever-present smile off his face.

In just three years under the UFC banner, “The Baron” has been a wrecking ball of destruction as he’s carved his way through the 135-pound ranks. Three consecutive successful showings inside the Octagon, and one unfortunate injury to title holder Dominick Cruz, put him in a position to face former WEC poster boy Urijah Faber for the interim bantamweight title. In his fight with “The California Kid,” Barao did what he always seems to do…win, and earned his first UFC title in the process.

With “The Dominator” on the shelf rehabilitating his knee injury, Barao set about defending his 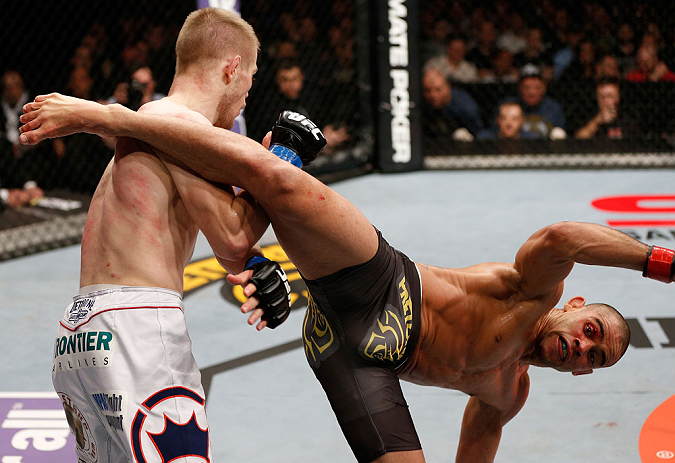 gold and made highlight reel material out of young upstart Michael McDonald and savvy veteran Eddie Wineland respectively. Back-to-back title defenses set up a unification bout with Cruz with Dana White setting the stipulations that if the Team Alliance member was forced to withdraw, his title would be vacated and the undisputed crown would be on the line.

While the showdown between the two bantamweight belt holders was highly anticipated, Cruz was forced out when he got re-injured, and Faber was tapped for a rematch with the Brazilian striking machine. Much like their first go around, Barao did what he always seems to do, but this time he painted a masterpiece as he did what very few men have done and finished the Team Alpha Male leader.

His victory over Faber at UFC 169 made him the undisputed champion of the bantamweight division, and while his reign becoming official on paper is an added touch, it didn’t alter Barao’s view of the place he holds in the division.

“I’m very happy to be the official champion, but I’ve always felt I was the true champion of the division. It didn’t matter if it was the interim title; I felt I was the champion. It is a dream of mine that has come true.

Yet, despite choking out McDonald, hitting a beautiful spinning back kick on Wineland and pounding out Faber, the MMA fan base hasn’t entirely latched onto the bantamweight champion. That said, UFC President Dana White is on the other side of that fence as he placed Barao at number two on his personal list of pound-for-pound best.

“I’m really happy to be recognized as one of the pound-for-pound best in the sport,” Barao said. “I have been working hard for a very long time and I’m conquering each fight and making my dreams come true. I’m happy that Dana has been recognizing me as one of the best and seeing me as one of the great fighters in the business right now.”

With an insane winning streak in tow and his bantamweight title certified, the Andre Pederneiras-trained fighter will be looking to keep things rolling when he squares off with talented prospect turned title contender TJ Dillashaw. They will battle for bantamweight supremacy this Saturday night in the main event of UFC 173.

While Dillashaw is still in the early stages of his MMA career, Barao has seen marked improvements from fight to fight and believes the fans will see something special on May 24.

“I think it is going to be a great fight,” Barao said. “Dillashaw is a wrestler but he’s been doing well in the stand-up game in recent fights. I’ve been training every aspect of my game and I’ll be ready for anything that happens in the fight. I’m looking forward to an exciting fight for the fans and the crowd will see a great show.”

> Watch: Sub of the Week - Barao vs. McDonald 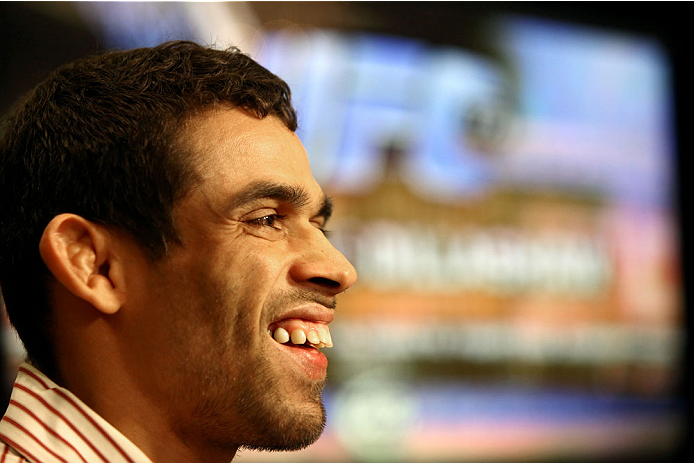 As for that smile that never seems to leave his face, Barao has every intention of it still being there - along with his bantamweight title - in the aftermath of his tilt with The Ultimate Fighter alum. In addition to the joy that is consistently plastered on his face post-fight, Barao has also been prone to break into spontaneous bouts of celebratory dance when his work inside the Octagon is finished.

“I’m just a genuinely happy guy,” Barao laughed. “I thank God for having a great family, friends and being able to do what I love.

“After winning a fight is a moment to celebrate and I always try to come up with something. The last victory dance was Forro - which is a music style here in Brazil - and is very common in my hometown of Natal.”