"I only expect a war, a great fight and I'll bring to the table the best tactics to get this victory." - Renan Barao 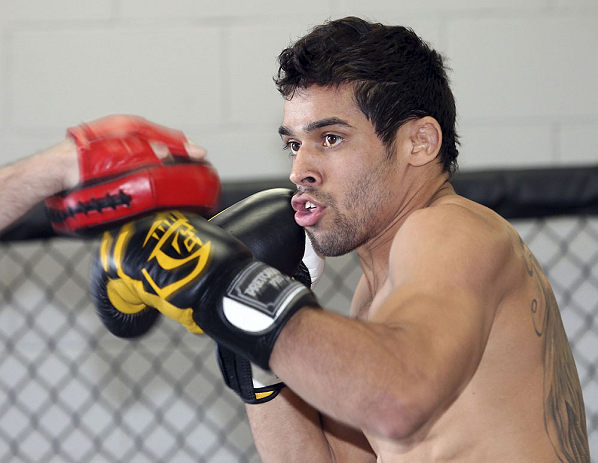 The sequence of events over the last three months that saw Renan Barao switch opponents twice before moving from UFC 148 to the main event of UFC 149 was stunning, to say the least.

Now, Barão is preparing to battle Urijah Faber on Saturday night for the interim UFC bantamweight belt, but to get here, he went through a lot of different emotions and a surprise after his fight against former WEC title challenger Scott Jorgensen.

Barão (30-1, 1 NC) dispatched Jorgensen by unanimous decision at UFC 143 in February, and his aspirations for a shot at the title were high. Then Jeff Hougland's name was announced as his opponent for UFC 148 in Las Vegas on July 7th, and while the Nova Uniao product was fine with the choice, he was uncertain what this match against the unheralded up and comer was going to do for him in his title quest. Okay, a win is a win, and it doesn't matter against who that victory comes against when you have a winning streak like Barao does, but a fight is a fight, and losing to someone like Hougland, who was only 1-0 in the UFC at the time, would be worse than an upset; it would be catastrophic.

But the MMA world keeps turning, and a succession of changes then shook the bantamweight division. Soon, the UFC was forced to relocate fighters from one event to another to cover for injured fighters who dropped off the cards - and it was announced that Barao would instead face the "Pride of El Salvador", Ivan Menjivar, at UFC 148. However, destiny had a final trick reserved for the man unbeaten in his last 31 fights, as an injury suffered by the 135-pound champion, Dominick Cruz, opened the ultimate door for what Barao never expected three months prior: a fight for the belt. This new situation was so big that Barao couldn't avoid smiling at any moment, even when he had to be in the stare down position inside The Ultimate Fighter training center in Las Vegas against Faber when their bout was announced.

"That's the problem with not talking English too well," he laughed, talking about his trip from Rio de Janeiro to Vegas without knowing the reason for the journey. "I didn't imagine that it would happen so quickly, and Dedé (Andre Pederneiras, Barao’s coach and manager) just said we need to go to USA to resolve some issue. I thought I'd fight one more time and then I would face the winner of Faber-Cruz (if he won the Menjivar fight). So now you all can understand why I couldn't hide the smile in any of the situations that came afterwards."

Talking about it now makes Barao laugh, but at the time, with Pederneiras not telling him the real reason for their sudden trip to Las Vegas, he was concerned, but the shocking news at that moment was turned into pure happiness when he finally found out the answers to his questions.

"My reaction… when I got the point, well man, I think I have no words," he said.  "Inside my body I was smiling much more than I do when I talk about that chance I have now. Look at it this way, we all have dreams, and we know how much time it takes for them to come true. I was looking for this objective for that long, and thank God I'll have this opportunity of showing against Faber the hard work I had put in during my whole career."

There’s no question that he deserves this shot. The man has been perfect during his time under the Zuffa umbrella, with two finishes in the WEC, three great performances in the UFC and the longest winning streak in MMA today. That’s 31 fights without a loss, but fighting Faber for the world bantamweight title is unquestionably the high point of Barao's career and how he handles everything leading up to the match of his life can be a burden. But Barao says it is not this way.

"I'm very relaxed with this winning streak issue; sometimes it's mentioned by my teammates regarding the amount of fights I have won one after other, but I don't think on it," Barao said. "This is a result of the hard work I had during my career, and I'm trying to collect the results of that again with a win on Saturday night and consequently the bantamweight UFC belt.

"My enthusiasm for this chance and the winning streak are things I don't think of at this point; my focus is on Faber and what I can do to beat him, the strategy I'll utilize, things like that. Nothing can harm me now, and because of that I don't turn positive achievements into pressure on my shoulders."

Part of the Nova Uniao team, Barao is teammate to a host of UFC fighters, among then a champion, Jose Aldo, the kingpin of the featherweight division. Aldo isn't just the man at 145 pounds, he is also one of the five men who beat Faber, and many believe that with some adjustments, Barão can have the former WEC featherweight champion's number as well. Is that the way Barao sees it?

"He gained experience and he dropped one weight class since he fought Aldo, so we had some changes here," he said. "Of course Aldo's support is a key point, but I only expect a war, a great fight and I'll bring to the table the best tactics to get this victory."

During those last 90 days prior to the main event of UFC 149, Renan Barao passed through several different emotions, including uncertainty and happiness. But we can't forget that this is a Barao's dream and he wants to make it happen in real life with a happy ending. So he foresees the final result of the match as such:

"Arm raised, belt around my waist and a smile bigger than the one when I found out I would fight for the interim UFC bantamweight belt. That is what I imagined for me and a dream [a mission] accomplished."