"The UFC was my target; I was thinking of a way to be part of the show, and even through the most I weighed in my fighting career was 149.9 pounds, I wanted to take a chance over there." - Renan Barao 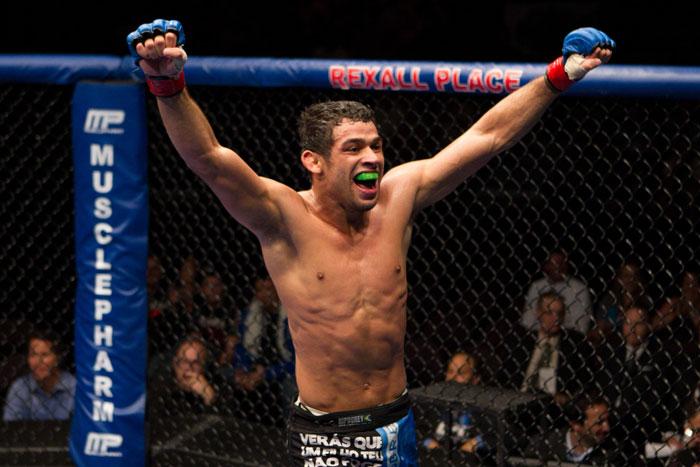 Brazilian Jiu-jitsu brown belt Renan Barao is currently experiencing the same “dream come true” feelings every high level competitor wants to feel when debuting in the big leagues. But as he prepares for his UFC 130 bout against the first-ever WEC featherweight champion, Cole Escovedo, it’s almost as if his arrival in the Octagon was fate.

The 24-year old bantamweight product of Kimura/Nova União is a veteran of 29 fights, with 27 victories, 1 defeat and 1 NC, and despite being a bantamweight, the idea of being in the UFC was so strong that he was willing to risk everything to get there.

"When I signed my contract to fight WEC, I was so glad, because that was the recognition for a job well done," Barao says. "But I can't lie, the UFC was my target; I was thinking of a way to be part of the show, and even through the most I weighed in my fighting career was 149.9 pounds, I wanted to take a chance over there."

Prior the migration of the 135 and 145-pound divisions from the WEC to UFC in late-2010, Barao's options were few if you look at the lightweight division of the UFC and the monsters which inhabit it. Joining that division would be a guarantee that Barao would be outmuscled while losing one of the most exciting bantamweight abilities - speed.

Giving an opponent more advantages isn't on the mind of any fighter, especially Barao, who already went through a similar situation in his debut, as he fought a much more experienced fighter while he was only 18 years old.

"I saw my teammates fighting MMA and I told my coach (Jair Lourenco), 'That is what I want to do.' The chance of fighting for the first time was amazing, however a mix of too much adrenaline, plus my opponent’s extra experience beat me and I nearly retired prematurely from MMA."

The support of his teammates allowed Barao to abandon the idea of not fighting in MMA anymore, and he started his stellar unbeaten run, beating adversary after adversary and making a name for himself in the Northeast of Brazil. This region suffers from a prejudice where fighters from there are seen as having big hearts but small technique. Barao disagrees, saying the Northeast fighters have the same toughness and skill, but less publicity about their feats.

"I heard a bunch of times about that concerning fighters who come from the Northeast of the country. This is a wrong label, as I felt prepared to beat guys from Rio de Janeiro and Sao Paulo after the fights I did in my region," he said. "We have less media coverage of our events, and because of that people think our resumes are fake. I was used to fighting with 30-60 days of rest and before my debut in WEC I fought two tournaments, dispatching two guys on the same night in each."

The word 'fake' is miles away from Barao’s credibility in the MMA scene. The son of a boxing professor (Netinho Pegado), the kid was a brawler when he was younger, and his family wanted to focus his energy in a positive manner, and not on street fights. But he didn't start in martial arts with his father; instead, the man who discovered the talented Natal native for MMA was the Rio Grande do Norte BJJ pioneer Jair Lourenco, and Barao is proud to consider himself a complete fighter due to the initial choices he made.

"I raised the Kimura/Nova Uniao flag and I started capturing BJJ medals as North/Northeast champion, 10-time State of Rio Grande do Norte champion and I placed third in the Pan Americans," he says of his main gentle art conquests. "Training in Natal with my father and Lourenco and in Rio de Janeiro with coach Andre Pederneiras, Johnny Eduardo, Eduardo Dantas, Marlon Sandro, Jose Aldo, Diego Nunes, Leonardo Santos and many others forged me to be what people like to see, a complete fighter. I can strike, I can grapple, I can throw and I owe this complete game that I acquired to these great guys by my side."

Facing a different opponent than his original one (Barao was scheduled to face 'Mighty Mouse' Demetrious Johnson, who now takes on former WEC bantamweight champ Miguel Angel Torres this weekend), the Natal native isn't worried with the change. As he likes to say, everything is in God's hands and it was Him who didn't let Barao retire after a lackluster debut back in 2005 and provided him 27 victories in 29 fights afterward.

"I'm taking this change normally, the same way I'm taking my UFC debut. I can tell you I was 100 times more nervous when I fought at WEC 49 (June, 2010 - his international debut) than now, fighting inside the UFC. I believe a victory is a victory, and I need to accumulate them until get my title shot. Johnson is on a good winning streak, Escovedo is a former WEC champ, so either guy is a worthy match. I just let God dictate the pace of my destiny, and what he wants, it will be."

Similar to his other countrymen when it comes to nicknames, Renan Pegado, aka Barao (in English, Baron), also emulates the same funny source of monikers like Toquinho, Cacareco and Tibau. So while we may think Barao comes from something related to the title of nobility from Pegado's family, the fighter explains that his grandmother is the one responsible for the name.

"I'd like them to," he says of people thinking he comes from nobility. "But it comes from the Brazilian soap opera 'Sinha Moca.' I was born after the big success of it on TV and there was a baron named 'Barao de Araruna' (laughs), so my grandmother told my mother, 'Now Renan will be our Baron, and this nickname has been attached to me since then."