Renan Barao: The Best is Yet to Come

"McDonald is between me and my dream and I trained strongly to keep what is mine now." - Renan Barao 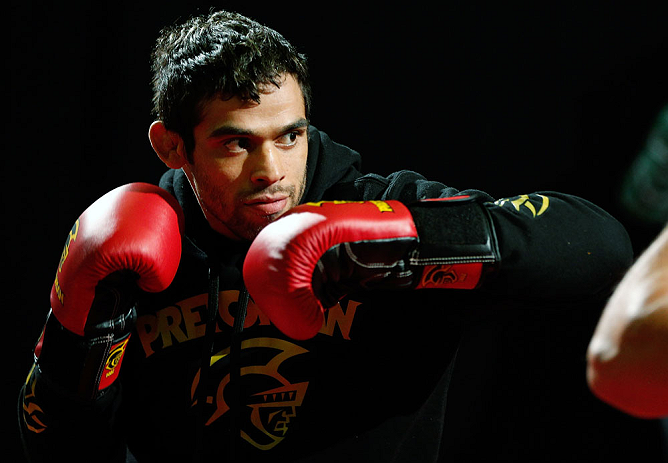 Monday, February 11th - while the majority of the people living in Brazil are partying for the popular Carnival, one man is hitting pads in the South Zone of Rio de Janeiro in preparation to defend his interim bantamweight title on Saturday in London. That man is Renan Barão.

Of course, Barão is a UFC fighter who is aware of his responsibilities, and he doesn't complain about that fact. He knows the job he needs to do against number one contender Michael McDonald in the main event of UFC on FUEL TV 7 at Wembley Arena. Seeing his teammates celebrating during the popular Brazilian party was a bit tough to deal with though.

"It’s hard to explain to outsiders what Carnival is here in Brazil," he says. "The party is great and is such a national party. I'm okay with the fact that I'm not involved, but seeing my friends and teammates leaving the training sessions and going straight to these parties around Rio de Janeiro is funny. I hope my party will be after I defend my belt successfully against McDonald."

Even though Barão is 100% focused on his job, it seems that with his Nova União peers enjoying the Carnival in Rio de Janeiro, his training can't be explored to its maximum. But Barão says he's not alone on his quest, and the friends that are partying are just a small part of the crew.

"The great part of being a Nova União member is that you've got several of the guys preparing themselves for MMA shows," he said, assuring his fans that he will be ready for battle. "So while there can be one guy who doesn’t have a fight scheduled, so his routine is less tough, we've got six or seven guys ready to give you a full hand at training sessions because they're going to fight soon and can't take it easy.

"And whether it’s ironic or not, I feel my training camp for this fight was better than ever," Barão continues. "Cutting weight and other issues which can harm your condition heading up to a fight were excellent. Plus, like I said, I had many teammates who are UFC fighters, or they have fights on the same weekend or in February, so it combined for an amazing camp to take on McDonald."

The importance of a training camp without any setbacks is the first key to Barão's goals. He has McDonald now, and it's his first step in cementing his name in the UFC. With a victorious fight against the challenger, Barão intends to have a title unification bout with currently sidelined champion Dominick Cruz later this year. But for now, he says "On February 16th I'll have the most important fight of my life. I have my objectives and I can't deny that I expected the unification instead of defending, but don't confuse expectations with me not being focused. McDonald is between me and my dream and I trained strongly to keep what is mine now."

The size of the challenge in McDonald is huge, as Barão's opponent is 15-1 with five wins under the Zuffa umbrella (WEC/UFC). Nearly one year ago he made a big statement in dispatching the former kingpin of the WEC's 135-pound division, Miguel Angel Torres, in great fashion via first round knockout. You can also add in that the 22-year-old McDonald wants to become the youngest champion in UFC history. Is that too much for the champion to deal with? He says it’s the opposite.

"I have a mentor, Jair Lourenço, who keeps me away from these outside Octagon jitters," he says. "I don't have any concerns, as I'm going to fight my best possible, based on the training conducted by Lourenço and André Pederneiras, and I will keep my belt. On the other side, whether a great fighter in McDonald will or won’t be affected by the buzz over his name, I don't care. He said his BJJ skills will be a secret, and I believe it'll be a secret until our fight ends. I don't believe he'll try BJJ against me; this fight will be a standup war and I'm ready for it. The best of the best Barão will show up in London."

So will we see a superior version of Barão than we have seen prior?

"Yes, this will be my fifth fight inside the UFC, and there is more to come, experience and fighting wise," he says. "Training for each of these fights I do in the UFC is a constant learning process and I feel my potential is increasing before and after each of them."

Fighting in UK for the second time in his career, Barão, who beat local idol Brad Pickett in his first trip, now wishes to bring the crowd to his side, making a sort of Brazilian Carnival filled by British fans.

"They couldn't root for me when I fought there first, but they saw that I give my all," he says. "I know they love fighters with this personality, so I hope to get their support, because I'm going with all my weapons into this title fight."