Rematch to Kickstart Shogun's Next Chapter 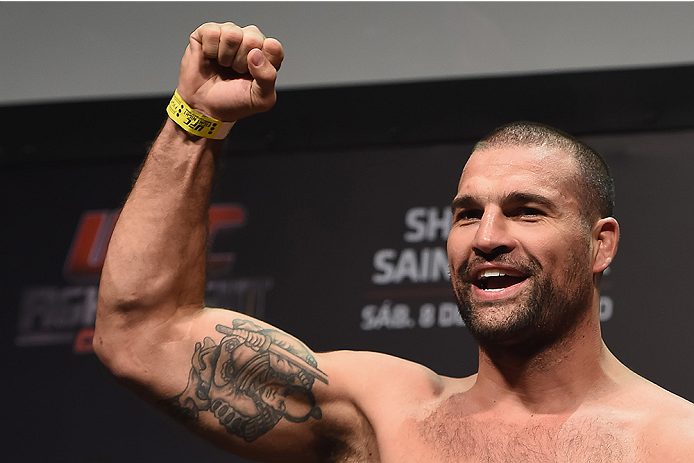 There is no such thing as sitting back and reflecting on the good ol’ days if your name is Mauricio Rua. At 33, the former UFC light heavyweight champ still has the reputation and the desire to keep fighting in the big fights, and Saturday night’s UFC 190 bout against Rogerio Nogueira is just the latest in a career that has seen him in the main or co-main slot in each of his 14 UFC fights.

It’s been a remarkable run, but one “Shogun” isn’t ready to look back on yet.

“You don't do that too much because you're always on the go and thinking about the next one,” Rua said through manager / translator Eduardo Alonso. “I'm still happy to train and compete, so I think I'll really come to look at things I did when I retire.”

That doesn’t mean Rua dismisses what happened in the past, so while his fighting focus is on Saturday night in Rio de Janeiro and his rematch with Nogueira, he vividly remembers the scene ten years ago in Saitama Super Arena in Japan, the night he defeated Lil’ Nog in one of the sport’s greatest bouts.

“I remember the meaning the fight had back then, with the big rivalry between Chute Boxe and BTT (Brazilian Top Team), plus, a lot of people thought Rogerio was the favorite to win the whole PRIDE Grand Prix tournament,” he said. “There were big expectations for this fight and it was a great competitive atmosphere, and I had in the back of my mind that I had to do it all to win it.”

Rua did do it all that night, as did Nogueira. Whether on the mat or the feet, the two countrymen battled it out for three rounds in a civil war that remains on fight fans’ “best of” lists a decade after the final bell sounded. That staying power is no surprise to Curitiba’s Rua.

“I think it’s because it was really a great fight, with both fighters having their moments,” he said. “It had everything and it’s also because of the nostalgia from the old days, the atmosphere PRIDE had and especially that we were at the peak of the rivalry between BTT and Chute Boxe. It was a great moment of our lives, we were both peaking, and the fight translated that.”

Rua was 23 at the time of the first Nogueira bout, two months removed from the biggest win of his career over Quinton “Rampage” Jackson. By the time the Summer of 2005 ended, Rua had knocked out Alistair Overeem and Ricardo Arona, and was the PRIDE Grand Prix champion and a young man many believed was the best 205-pound fighter on the planet. Ten years later, he’s an icon and an ambassador of the sport, something he never could have imagined when he was starting out in the Chute Boxe Academy.

“Not at all, you never really think that,” Rua said. “You want to be the best you can be, and you dream of being a champion. I wanted to follow in the steps of my brother (Murilo Rua), in Wanderlei Silva's steps, and the whole scene wasn't nearly as big back then. You couldn't even dream of achieving that level we are at today, and you were just hungry to be the best fighter you could. Then, you live one day at a time, one fight at a time and see where you land.”

Rua has landed on his feet, despite a recent cold spell in which he’s lost four of his last five. It’s the price you pay for fighting the best night in and night out, but outside of the Octagon, the 33-year-old is in a good place, so now it’s time to get back in the win column and there’s no higher-profile fight at the moment than one against his old rival, one he always assumed would happen.

“I always thought we would eventually fight again because the first fight was so good, and people kept asking about this fight in the press for so long,” he said. “The fight was supposed to have happened in Canada in 2013, so it was a matter of time.”

Better late than never for a fight that will likely always produce top-notch action whether it happened five, ten, or 20 years after the first meeting. At least those are the expectations, but Rua feels no pressure to repeat what happened in 2005.

“I think each fight is a different fight, and if we try to redo what we did there, most likely we will come up short,” he said. “It was a different time, different situation, different rules, and a different show. But we both want to win; that's the most important thing. If we focus on that, the way we match up, it's going to naturally be a great fight anyway and that's what's great about it for the fans.”

For Rua, it’s always been about those fans, and with his rematch against Nogueira, his opponent’s brother, Minotauro, facing Stefan Struve, and of course the main event pitting Ronda Rousey against Bethe Correia, this card is almost like a gift for those who have been supporting him and the sport for so long. He has no problem describing it as such either.

“I think UFC 190 is a great card, a great night of fights with so many good fights that you have prelims that would be main card any day,” he said. “Plus, we have the TUF Brazil finals as well, so it adds more to the history of the card and the fight, since we will be competing right after ‘our kids’ fight for the TUF Brazil title. I think Brazilian fans deserve this card and they will enjoy it.”