From His Charismatic Personality To Exciting Fighting Style, TUF 29 Winner Ricky Turcios Has Been Must Watch Television Each Step Of The Way.
By Gavin Porter, On Twitter @ItsGavinPorter • Jul. 7, 2022

It was clear from moment that Ricky Turcios showed up on The Return of The Ultimate Fighter set that he had that “it” factor.

The Houston native’s personality was captivating, a perfect mixture of intense focus and humor that quickly grabbed the hearts of fight fans. And while it’s great to have a fun personality, what matters is that Turcios is one heck of a fighter. The 28-year-old bantamweight showcased his abilities on Team Volkanovski, making the absolute most of his time in the spotlight on his way to being crowned the TUF 30 bantamweight champion.

After nearly a full year away from competition, Turcios makes his highly anticipated return to the Octagon this weekend against Aiemann Zahabi at UFC Fight Night: Dos Anjos vs Fiziev.

Get ready for Turcios’ first official UFC bout by reacquainting yourself with his incredible run on TUF 29: 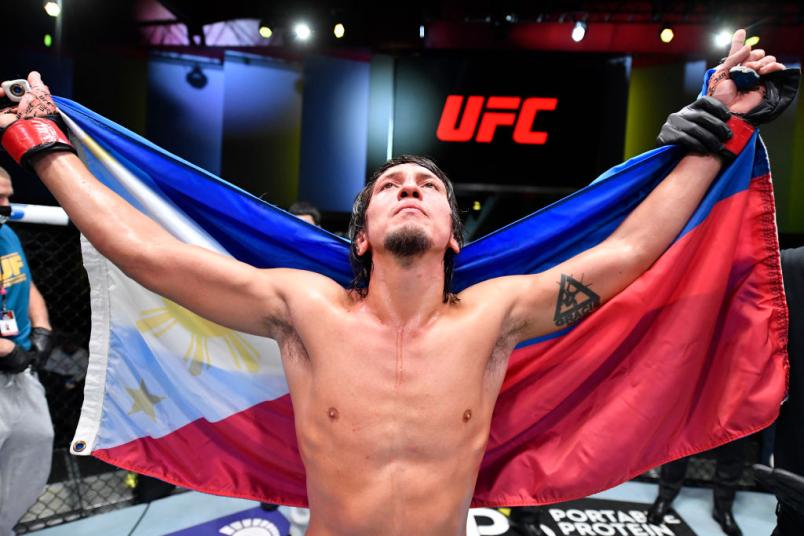 As the ninth overall pick on the show, Turcios immediately felt like he had something to prove to himself. He wanted to unleash his “internal spirit” and win the fight “within” himself.

Turcios’ first test came against Team Ortega number one pick Daniel Argueta, in what would prove to be a battle of who wanted it more. Both bantamweights came to scrap, with each having success throughout the bout.

The two met right in the center and threw flurries of strikes in the pocket, each landing solid strikes and engaging in wild scrambles.

The fight was so close that a sudden death third round was needed, where Turcios was finally able to separate himself from Argueta. He appeared to have “more gas in the tank” according to UFC President Dana White, and he impressed the boss with his willingness to let his hands fly at the end of the fight, despite how grueling the bout was.

Turcios won the bout via unanimous decision and advanced to the semifinals.

Turcios to UFC.com after defeating Argueta: “I had to go through the fire and through the darkness and dig deep and that’s what the martial arts is all about.”

In the semifinals, Turcios faced Liudvik Sholinian, a tough grappler who had already defeated Team Volkanovski’s top pick, Mitch Raposo. Stylistically, the matchup was an interesting one for Turcios, who preferred to pick his opponents apart on the feet.

Turcios on TUF before fighting Sholinian: “Everything that I’ve done up until this moment has led to this day, as I face the biggest challenge of my whole career, and I’m ready – I’m ready for this moment.” 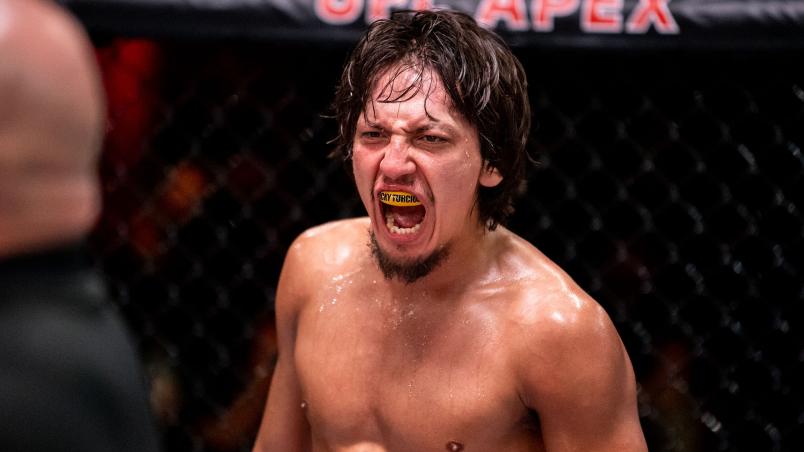 Bantamweight Ricky Turcios reacts after his victory in the semifinals on The Return of The Ultimate Fighter. (Photo by Chris Unger/Zuffa LLC)

In the fight, Turcios turned up throwing a great volume of strikes and combinations. But Sholinian is a game opponent, and he matched that energy, coming with his own variety of challenging attacks. Turcios had a very strong opening round, which was capped off by a flurry at the horn.

Things heated up in the second round, with Turcios getting a little wild at times and Sholinian working in his grappling to give Turcios different looks. Turcios continued to try to keep things on the feet, but Sholinian was able to get him to the canvas multiple times. It was a close round, but the judges gave the nod to Sholinian, and for the second straight bout, Turcios found himself in a sudden death round for all the marbles.

Turcios got it going quickly in the third round and never let off the gas. He started pouring it on, especially in the final portion of the round, landing combination after combination. It was the perfect finish to the fight for Turcios and exactly the way he envisioned making it to the finals.

Turcios won the bout via unanimous decision and advanced to the finals against Brady Hiestand.

Turcios to UFC.com after defeating Sholinian: “We stood toe to toe in the Octagon and did that warrior stuff. It was crazy!”

After beating Sholinian, Turcios was able to leave the TUF house and go back home to Houston to prepare for the TUF finale. He watched each episode with his family and friends, trying his best not to break the news of what he’d accomplished.

Those two victories helped light a fire under Turcios, as he had leveled up through those performances and felt like a “true Saiyan” from Dragonball Z. His battles and helped him gain strength and knowledge and prepared him for the best version of Hiestand possible.

Turcios to UFC.com before fighting Hiestand: “I have a strong opponent in Brady coming up on Saturday. He’s going to throw everything at me but I’m ready for this fight. I come here to this Octagon and I’m ready for another epic battle, another epic war. I’m prepared. I’m ready to win.” 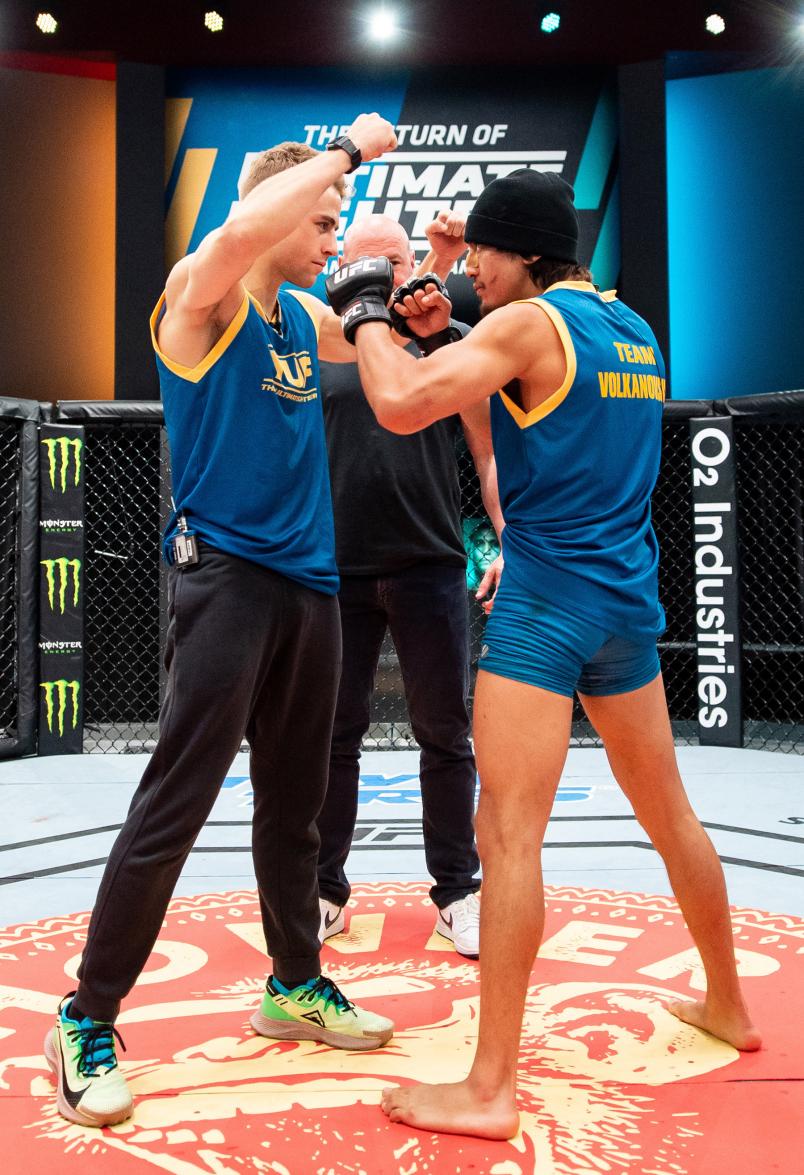 Brady Hiestand and Ricky Turcios face off during the filming of The Return of The Ultimate Fighter at UFC APEX on May 20, 2021 in Las Vegas, Nevada. (Photo by Chris Unger/Zuffa LLC)

An epic battle and epic war was exactly what Turcios got when he collided with Hiestand at UFC Fight Night: Barboza vs Chikadze on August 28, 2021.

Hiestand was able to find early success with his grappling, getting Turcios to the floor on multiple occasions. Turcios was able to get back to his feet each time and pepper Hiestand with shots. Turcios also took Hiestand down and was able to cut his foe. It was a solid and competitive first round.

Each fighter was able to secure a takedown in the second frame, with some wild scrambles ensuing. With each fighter trading moments of control, it was anyone’s game heading into the third – a place where Turcios has excelled throughout the tournament.

Turcios found his mark and was able to drop Hiestand early in the third, but Hiestand turned the exchange into a takedown. It was a battle that ended up against the fence, with Turcios landing the more precise shots and throwing all the way until the final horn.

The bout was so good that it was voted as one of the best fights to ever happen inside the UFC APEX, but, in the end, Turcios’ third round gave him the edge.

Turcios took the bout via split decision and was crowned The Return of The Ultimate Fighter bantamweight winner.

Turcios to UFC.com after defeating Hiestand: “Call me The Ultimate Fighter champion forever now. I will take this one to the grave. Etch me in UFC history. For real.”

This Saturday, Turcios makes his first walk to the Octagon since leaving the UFC APEX with the TUF trophy. It’s a moment that he’s been waiting for over the course of the last 11 months.

And you can guarantee that Turcios can’t wait to let his warrior spirit take over and put on a show against Zahabi.