The Relaunch of Ryan Bader

"I feel like I’m the fighter that I want to be; I just have to put it all together." - Ryan Bader 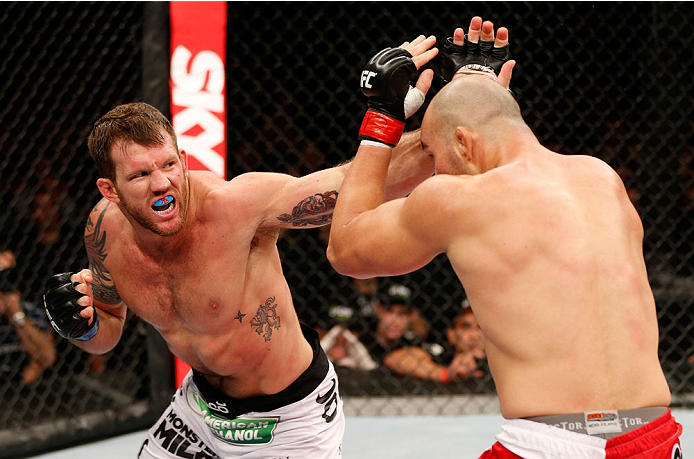 If you say that Ryan Bader has pretty much seen it all thus far in his 20-fight pro mixed martial arts career, you would be spot on. He’s won The Ultimate Fighter, he’s been the fan favorite and the villain, he’s fought past and future world champions, he’s main evented a UFC show, and he’s had both big wins and big losses.

September’s fight with Glover Teixeira? Add that to the list of experiences he won’t forget anytime soon and one that he expects will make him an even better moving forward, starting with this week’s UFC Fight Night meeting with Anthony Perosh.

He looks at his first round TKO loss to the next man to meet light heavyweight champion Jon Jones in a philosophical way these days, but as soon as the fight was over and for a good bit of time afterward, it ate at him.

“On the bus on the way back to the hotel, then the day after on the way to the flight, and even the week after, I was thinking about it,” said Bader of the fight in Belo Horizonte, Brazil, where he rocked Teixeira and was seemingly one more clean shot away from victory when he got caught himself and stopped. “In my mind at the time, when I rocked him and went after it, I thought I was more composed, but when I watched the film I realized I wasn’t. I had him a couple times, and talking with him afterwards, he said I rocked him a good three times. So it does sting. You want one of those punches to land and put him away and I just got a little bit careless.”

It’s another one for the memory bank, another lesson learned. The education of Bader has seen him weather some rough waters, but at 30, he’s still standing, and the way he sees it, he’s on the verge of showing just what he can do on fight night against the best in the game.

“I learn from everyone, and the lesson from this one (against Teixeira) is be more patient, and although I was trying to finish it right then and there, I need to take my time,” he said. “I feel like I’m the fighter that I want to be; I just have to put it all together and there are just a few little things that I’ve been working on to put the whole package together, and I want this fight to be that next kicking off point where I break into that top five.”

If you’re the superstitious sort, this week’s fight is the perfect one for Bader to kick off the next chapter of his career, and it has nothing to do with his opponent, but everything with the location. Back in February of 2010, Bader was the young gun from TUF 8, unbeaten in three UFC fights, but still unproven. But when he traveled to Sydney, Australia and knocked out Keith Jardine, it was the start of his move up the light heavyweight ranks and into big fights on a consistent basis. This Friday (Saturday in Brisbane), he’ll be back in Australia and looking for the same after-result.

“I’ve had some wins and losses and I’ve been fighting real tough, top of the line guys, and I’ve been losing to some of those guys and I need to beat the top five guys to get where I want to be,” he said. “So I think this fight is another launching pad for that.”

Of course Perosh is not volunteering to play the sacrificial lamb, especially not in front of his home country fans, and Bader knows that despite the Sydney native being 41 years old, wins in four of his last five bouts – all finishes – show that this opponent is far from an easy mark.

“He’s a tough veteran, he’s been in this sport for a while and on the combat scene for a while with his jiu-jitsu, he’s seasoned, and you’re not gonna go out there and have an easy fight with him,” said Bader of Perosh. “You’re just not gonna put him away easily. Some of the younger guys that are more inexperienced, you can get away with little things and they might give when they start getting messed up a little bit, but Perosh won’t. He’s a guy that is not really great at striking, he’s not really great at takedowns, he’s good at jiu-jitsu, but he’s got tenacity and toughness and he puts it all together, wears people down and stops people with ground and pound and submissions. His method works.”

It’s up to Bader to crack that method and implement his own, a task he feels confident with. So if you want to talk about ‘must win’ fights, being the bad guy in his opponent’s backyard, and any of the other extraneous things that go along with fighting in the spotlight, he’s not bothered by any of it anymore. Remember, he’s been there and done that.

“Nothing fazes me anymore as far as the fighting game,” he said. “It used to be I’d get a fight, get real nervous, and it was kind of a surreal thing. Now it’s my career, and it’s a job. I’ve been there tons of times with the top guys and stood across from a Who’s Who of MMA, so it doesn’t matter who I’m fighting anymore. I’ll fight anybody and I believe I’ll beat anybody. Going forward, I feel like my skills are getting even better, I’m more relaxed, my cardio’s not an issue anymore, and I believe I can be one of the top level fighters.”