There isn’t one thing that Rafael Dos Anjos can point to and say, “This is what I can enjoy eating now that I’m a welterweight.” It’s simpler and more profound than that.

“I can live,” said the former lightweight champion as he approaches his UFC Winnipeg main event against Robbie Lawler on Saturday. “I can eat normal. I don’t have to have that feeling after having my meal of still being hungry. Now, if I feel hungry I can eat again if I want.”

For those who don’t fight for a living, it may sound like something that wouldn’t be an issue, ever. You’re hungry, you eat. Case closed. But that’s not the way it goes, and for Dos Anjos, a career’s worth of blood, sweat and tears had finally put him on the doorstep of a world title shot in 2015, and he was not about to let it slip away over his own personal comfort level.

So he stayed at 155 pounds and won that title, defeating Anthony Pettis in March 2015. At the time, the man holding the belt in the 170-pound division was Lawler, and Dos Anjos soon thought of a move north for a SuperFight and a permanent fighting home. But things would change rapidly, as they do in this business.

“Yeah, that was the fight I was thinking about even before, when I was a champion,” he said. “When I defended my title against Donald Cerrone, I had plans to move up because I was feeling that my body wasn’t responding that well with the cut. Then the Conor (McGregor) fight came up, then I got hurt and then I fought (Eddie) Alvarez and lost the belt. That was when I decided to move up. But that was the fight (versus Lawler) I was thinking about.”

From Pettis to Alvarez, Dos Anjos hit his mark on the scales three times. In November 2016, he did it once more at lightweight but would lose to Tony Ferguson. And that was enough. 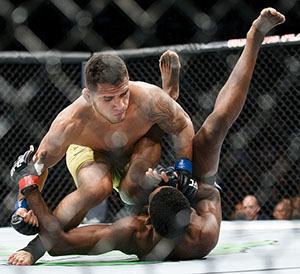 “Before, 70 to 80 percent of my camp was focused on losing weight and being stressed out about making weight,” he said. “Now, I still have to cut some weight, but it’s way easier. I can have a normal life, I can enjoy my life and my training and put a hundred percent of the work into my technique and training and not just losing weight and being stressed out. It’s been a very good moment for me. I’ve been around for so long, but I’ve never been as happy as I am now.”

That new outlook on his fighting life has been evident in back-to-back wins over Tarec Saffiedine and Neil Magny that have propelled him into the No. 4 spot of the welterweight rankings heading into his meeting with the No. 2-ranked Lawler. A win on Saturday and it could mean a title shot for the Brazilian. Those are high stakes in a high-pressure environment, but neither Dos Anjos or Lawler have resorted to gamesmanship in order to gain an edge before fight night, and that’s a twist both are embracing.

“That’s the good part of it,” Dos Anjos said. “We’re gonna go there and we’re gonna take care of business like men, like fighters. I miss that old school feeling. These days, all these guys trash talk on Twitter and other social media and I’m not good at it. (Laughs) I’m good at fighting, and Rob is as well. It’s gonna be great and we’re gonna put on a great show for all the fans.”

It’s the perfect way for Dos Anjos to end the first year of the newest chapter of his career, and the way he sees it, this will be the best one.

“I’m 33 and I feel that I’m at the best moment of my career, physically and mentally,” he said. “I’m just happy to make the move up a weight class and everything else is coming along well in my life – family, everything is great, and it’s a great moment right now.”