"Having that support is going to be a huge advantage for me.  (It
provides) A lot of motivation for me to win this fight, so it will be
great." - James Te Huna 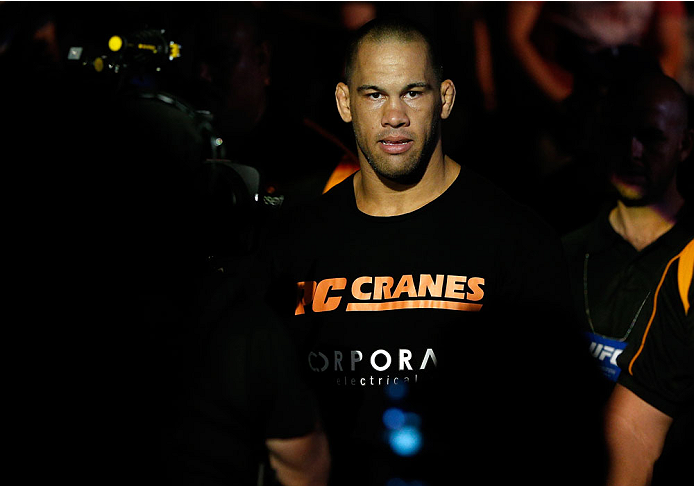 James Te Huna has the perfect platform to reintroduce himself as a fighter.

Fighting Nate Marquardt in the main event of UFC Fight Night 43 at Auckland, New Zealand’s Vector Arena this Saturday, Te Huna will make his debut at middleweight and also compete in the first UFC main event of his career. For the New Zealand-born resident of Penrith, Sydney, Australia, it’s a chance to establish himself as a threat at 185 pounds in front of a home crowd.

Te Huna’s last appearance in the UFC’s Octagon ended with a vicious first round knockout loss to former light heavyweight champion Mauricio “Shogun” Rua in December of 2013. It was his second consecutive loss after a first-round defeat by guillotine choke to Glover Teixeira. When asked if the loss to Shogun was a learning experience, Te Huna offers a simple response.

“(What I learned from that fight was) Just to keep my guard up, so I don’t get caught on the chin again,” he laughs. ”It was just one of those things. I didn’t have my hands up and I got caught.  Made a mistake, paid the price.”

Te Huna states that the defeat to Rua has not put a lasting dent in his confidence, and it’s noteworthy that a knockout loss to Rua is a fate Te Huna shares with luminaries like Lyoto Machida, Chuck Liddell and Forrest Griffin.

“I forget about those losses, I’ve accepted it and just moved on.  It’s pretty easy for me (to regain confidence after a loss). I’m the type of person that lets things go and gets over things pretty fast and that’s what I’ve done here.”

But while Te Huna may be skilled at not dwelling on the past, his back-to-back losses in 2013 signaled that something needed to change.

“I went stale in 2013 and I couldn’t get my head space right.  The move to the middleweight division is to try and reinvent myself and it’s a new challenge for me.”

A loss on Saturday would mean a three-fight losing streak for Te Huna, a statistic that does not bode well for a fighter’s career in the UFC.  But Te Huna states that he’s not focusing on that prospect.

“It does add more pressure, but I don’t hold on to that. I let those losses go pretty easily.  So it’s not pressure from that, but more pressure being the main event in my home country.

How Te Huna will fare physically in his new weight class remains to be seen. The science of  cutting weight then refueling rapidly for a fight can be a make or break scenario.  Done incorrectly, the body can be too depleted to perform. While Te Huna has undergone practice weight cuts, he states that the ultimate test will come on Saturday.

“I don’t know (if I will perform better physically at middleweight); we’ll just have to see how we go this weekend.  But I’ve taken all the right steps to dropping the weight safely.  I’m a lot fitter than I was before.  It’s a new step and it feels like I’m starting out again,” said Te Huna. “Probably with my frame it is my natural weight class, but I’ve got a huge appetite and I love to eat, so for me, making light heavyweight was always comfortable.  I hate cutting weight, but everyone does it in the UFC so it should be a good test.  I’ll see where I’m at after this weekend.”

In former title challenger Nate Marquardt, Te Huna faces an explosive and well-rounded veteran.   Marquardt also has his back against the wall after three straight losses, two of which were by knockout.  Marquardt is returning to the middleweight division after a largely unsuccessful stint at welterweight.

Te Huna doesn’t identify many disadvantages in his opponent, but believes he is susceptible to being knocked out.  And that’s a weakness the hard-hitting Te Huna plans to take advantage of.

“His (advantage) is being at middleweight and that’s where he’s best at.  He was at welterweight and he’s coming back up.  His disadvantages, I don’t know, he won’t have many.  It just depends on how he comes back from those last two losses.  He did get caught in the first round, and I got caught in the first round too by Shogun, but I’ve watched his fights and as soon as he gets a little tap on the chin he goes out.  So I’ll be looking at hurting him.”

While Te Huna’s primary weapons are his heavy hands, the explosive fighter states that he will be happy to finish the fight in any way he can.

Te Huna continually shakes up his training camp in an effort to keep improving.  This time around, Te Huna has enlisted a new boxing coach, a new wrestling coach and new sparring partners that include fellow New Zealand-born Australian UFC fighter Robert Whittaker.

“(I am working with) Mark Kinney, he’s an English National Team coach for boxing, I’ve got a new wrestling coach and some new sparring partners”

While fighting in the main event in front of a home crowd puts pressure on Te Huna, he also believes it confers a psychological advantage.  Te Huna grew up dreaming about representing New Zealand in rugby.  But now he’s looking forward to the opportunity to represent the country of his birth in the UFC’s Octagon.

“Of course, having that support is going to be a huge advantage for me.  (It provides) A lot of motivation for me to win this fight, so it will be great.”