"I’m gonna think that 2012 is gonna be a good year, an undefeated year, and I’m gonna have four fights. And by the end of this year, I will be a top contender." - Cole Miller 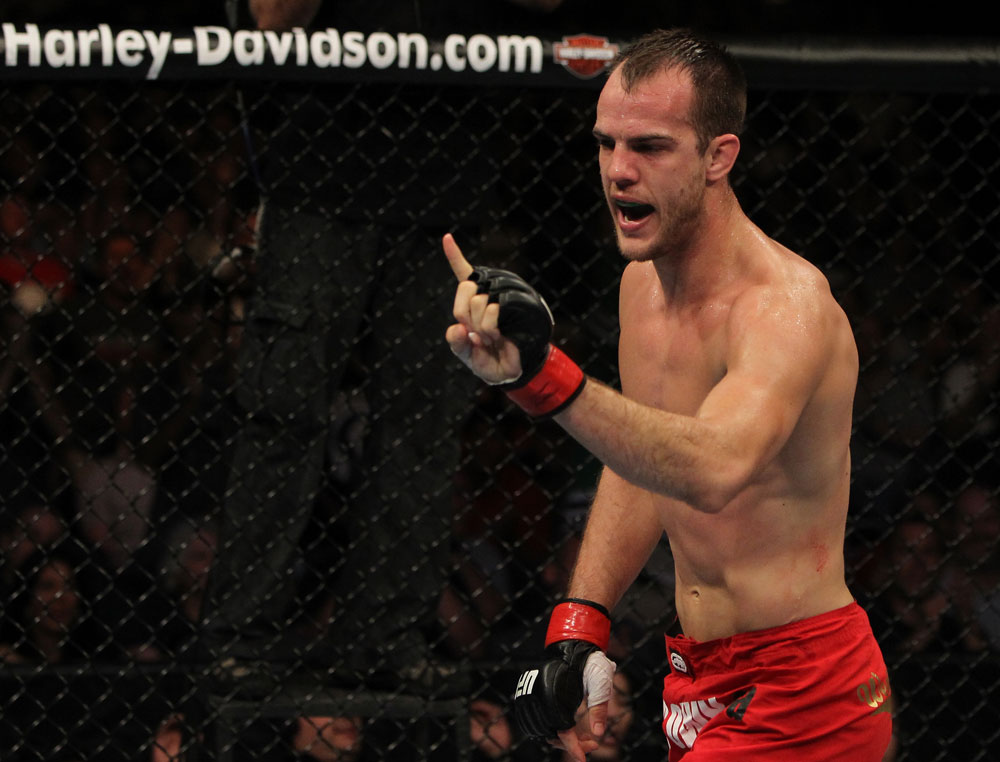 The decision to make the leap to a new weight class isn’t one to be taken lightly, and unfortunately, it’s usually done when a fighter has reached a dead end in his career predicated by a series of losses. A change in scenery can do you good, the story goes, but often even a drop of 10, 15, or 20 pounds doesn’t always do the trick.

Cole Miller doesn’t fit that stereotype. For much of his career, he fought at featherweight, a veritable no man’s land in terms of big show exposure in the United States in the years before the WEC made its mark on the MMA landscape. He then moved to the 155-pound lightweight division, no problem for his 6-foot-1 frame, and after parlaying that move into a spot on season five of The Ultimate Fighter, he appeared to have found his home.

But even though he won seven of ten fights at lightweight, collecting three Submission of the Night awards and one Knockout of the Night bonus, the thought of dropping back to featherweight was always there, a notion that grew stronger when the WEC merged with the UFC in late 2010.

“I’ve been thinking about this for years now,” said Miller, winner of three of his last four at 155 pounds. “The only thing that really kept me from not moving down was the bonus money. I was getting injured and only fighting about twice a year at the time, and I had made a couple bonuses and that big bonus money wasn’t in the WEC. I had never fought at 155 really until The Ultimate Fighter. I fought a couple times there, but it was only to get some recognition as a lightweight so I could get into the UFC – that was my goal. So I fought the whole first half of my career at 145 pounds, and I definitely wanted to be competing at the top level, so I’ve been thinking about it for a few years now. And once they brought the WEC into the UFC, I was like ‘all right, this is something I’ve gotta do.’ I knew I was gonna move down.”

This Friday night (Saturday morning in Australia), Miller makes the move official when he takes on Steven Siler in a UFC on FX 2 featherweight bout. But nothing is ever as cut and dried as that, especially when it comes to the career of “Magrinho,” one that has seen his most difficult foe become his body, not the person standing across from him on fight night.

“I’ve been fighting twice a year for five years now,” he admits. “I’ve had a surgery every other year since I got into mixed martial arts in 2003. It just sucks and I’m tired of it.”

He’s not exaggerating either, and as a point of reference, just look at 2006, a year Miller fought eight times, winning seven. From there, he went straight into the Ultimate Fighter house, and following a finale card win over Andy Wang, he was apparently on his way to big things. But injuries and losses to Jeremy Stephens, Efrain Escudero, and Matt Wiman kept him from putting together more than a two fight win streak in the Octagon (something he’s done three times). More tellingly, the hard days of training when he was healthy, with teammates that were lightweights in name only, were beginning to wear him down.

“I was giving away a lot of size, and size isn’t everything and I wouldn’t say it’s the reason I lost some of my fights,” said Miller of life as a lightweight. “I made some mistakes, and you lose fights for a lot of different reasons. But the point is, why give up the strength and size if I don’t have to? And it wasn’t just the in fight stuff that gets you beat down and worn out; it’s the training. I’m training with real lightweights. I’m 165 pounds and I’m training with (Gleison) Tibau. 155 pounds isn’t big, but 190 pounds of muscle is big, and this is the weight of the guys I’m training with when I’m walking around at 165. I was worn out more after training, I was having to do strength and conditioning three days a week, and a lot of it was heavier lifting just so I could maintain some size and strength, and I was just beat down and worn out physically and mentally.”

So after his submission win over TJ O’Brien last August, he decided it was time to return to featherweight. Of course, a broken right hand suffered in the first round of the fight postponed that move, but once he was cleared to resume training and he got the Siler fight, a new day dawned for the Georgia native.

“Now I’m training with guys my size, and I feel it,” he said. “I don’t feel beat down constantly anymore, and I feel better. I’m at the same speed, but my strength has gone up, and I’m able to train the way I naturally do. As a martial artist, I’m able to throw higher outputs because I don’t have to worry about takedowns as much. I can stop them coming from featherweights. It’s just completely changing the way that I’m training and functioning. Fighting at featherweight and training with featherweights full-time, I feel I’ve got a couple more years before I really start to hit my physical prime, and I think this is gonna be key to bring the most out of my game.”

And as fate would have it, who does Miller get to show off his new featherweight game against? The same fighter who defeated Miller’s brother Micah to get into the house on season 14 of The Ultimate Fighter. Bad blood? Revenge? Fighting for the family honor?

None of the above.

“I’m not some guy that needs to come in here and defend my little brother’s honor,” said Miller. “My brother’s a grown-ass man and my brother’s a better fighter than I am. Fortunately for Siler, things happened, and my brother happened to get food poisoning and a stomach illness when he fought Micah. And in reality, why would I want this fight? If I go in there and let’s say I beat this guy, I beat this guy but my brother couldn’t. It doesn’t really make it look as good. So I’m not excited to jump in and take this fight for that reason. I’m excited because I haven’t fought in six months and this guy’s just another name for me. I’m ready to go in there and kick his ass because the bank account’s low and I’m ready to kick somebody’s ass. I don’t care that he beat a lackluster Micah Miller.”

Miller’s confidence is evident, and he’s earned that right. But at the same time, he’s also not about to dismiss Siler, an experienced vet who is underrated by many in the game. Cole Miller is not about to underrate him.

“I certainly don’t look at Steven Siler as just some scrub,” he said. “I’ve got respect for the guy, he’s been around, he doesn’t have the greatest record, but he definitely doesn’t have a bad record. I have a very realistic viewpoint of his skill level and I trained according to that.”

So while Siler may be the wild card in this matchup, what Miller is sure of is that a win in his new division will kick off plenty of speculation that with his name, skill level, penchant for exciting fights, and a wide open contenders’ class at 145 pounds, he could be on the fast track to the title picture sooner than most. He knows that talk is out there, but first things first.

“I think the one thing at lightweight and featherweight that they have in common is that there is really no clear-cut path,” he said. “There’s just too many guys. But the one thing that featherweight has that I have an advantage at is I’m new to it, so I think that as long as I win and I win in a good fashion and I perform in the way that I’m capable of, with the right fights I can certainly be on what you call a fast track. But I’m not looking past my next opponent and I’m not underestimating him. I don’t want to say I’m looking past him, but I am looking through him. I’ve got high hopes and aspirations about moving down to 145 pounds, and I’m not just seeing this light at the end of the tunnel. I’m seeing every road block that’s in my way, and I’m training according to them.”

Cole Miller has probably seen more roadblocks than the majority of his peers, and for five years, he’s managed to stay afloat and relevant under circumstances that would have eliminated most other fighters. He knows it too. But he also knows that he can’t take another five years of the same thing, or even one year. Now’s the time to make his run, and he’s got all the confidence in the world that he’ll be able to do it his way.

“If 2012 isn’t different from 2011, I’m about to be up out of this,” he admits. “I can’t be doing this. I can’t be fighting twice a year and winning half the fights I fight in a year. To be honest, if 2012 goes the same way as 2011, I’m gonna find something else to do. But the way I’m seeing 2012, I just keep thinking that things can’t keep going the way they’re going. I struggled too much and put so much into this sport, and there’s definitely people that have had it harder than me in life and in the game, but I’ve paid some dues and I need a little bit of good luck on my side. I’m gonna think that 2012 is gonna be a good year, an undefeated year, and I’m gonna have four fights. And by the end of this year, I will be a top contender for that title.”