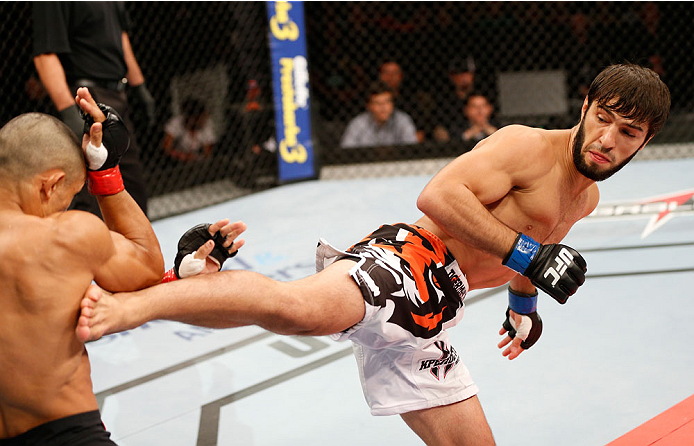 The featherweight division will be front and center this week when the UFC rolls out fight cards on three consecutive evenings, with five different bouts in the 145-pound ranks, culminating with the highly anticipated championship unification clash between Jose Aldo and Conor McGregor at UFC 194.

Two nights before the long-reigning Brazilian and his Irish adversary wrap up an whirlwind week of mixed martial arts at its highest level, the second bout of the three-night, 30-plus fight avalanche of action features a featherweight hopeful looking to put a frustrating year behind him and set himself up for bigger and better in 2016.

Zubaira Tukhugov made his UFC debut nearly two years ago, stepping into the Octagon and collecting a unanimous decision win over Douglas Silva in Jaragua do Sul, Brazil in February 2014.

Though he tired down the stretch, it was the kind of performance that piqued your interest and made you want to see the 24-year-old Grozny native in his sophomore effort. He dropped Silva in the first and offered numerous spinning attacks throughout, landing with several and just missing with others. It was like a strong trailer for a movie you didn’t know you wanted to watch, but were definitely interested in seeing once the preview had ended.

It would be eight months before Tukhugov returned, but the Tiger Muay Thai representative made it worth the wait, marking up Ernest Chavez early in Stockholm, Sweden en route to collecting a first-round stoppage win to push his winning streak to eight and deliver on the promises of greater potential he flashed in his maiden voyage into the Octagon.

Light on his feet and quick with his hands, the former Russian National Combat Sambo champion showed his full striking arsenal in just four minutes and change, wobbling his foe with a clean right hand before finishing him with a hail of lefts along the cage. With his follow-up effort trumping his initial appearance, Tukhugov appeared poised to make a run at breaking into the rankings in the deep and talented featherweight division in 2015, but unfortunately, it wasn’t meant to be.

“Unfortunately I couldn’t perform during the whole year,” lamented Tukhugov, who was forced to withdraw from a June matchup with Thiago Tavares due to a rib injury. “This is the thing with sports though – no one is immune to injury.”

Healed up and itching to fight, the confident Tukhugov will finally make his first trip into the UFC cage this year on Thursday, when he steps in with former Ultimate Fighter finalist Phillipe Nover inside The Chelsea at The Cosmopolitan.

Nover was a standout on Season eight of the long-running reality TV competition, drawing high praise from UFC President Dana White before dropping a unanimous decision to fellow Team Noguiera contestant Efrain Escudero in the finals. Two additional losses led to the now 31-year-old fighter being released from the promotion and an 18-month hiatus from competition. Three straight victories and the UFC making its long-awaited debut in the Philippines led to the Brazilian jiu-jitsu black belt earning a return to the roster and Nover made the most of it, picking up a split decision victory – his first in the UFC – over Yui Chul Nam.

After a lost year spent on the sidelines, Tukhugov is simply happy to be competing once again, and he sees this matchup with Nover as a chance to once again establish himself as one of the top emerging talents in the 145-pound weight class.

“With every training session, I feel myself getting better and better,” explained the 17-3 standout that will be competing in the United States for the first time in his career next week. “I see myself as a high level fighter; I think I could already be in the Top 10 (had I been able to compete earlier over the last year).”

In addition to getting back into the cage, being the second bout of a hectic week rich with important featherweight matchups is a positive for Tukhugov.

With designs on becoming a factor in the increasingly competitive collective and with a hotel suite in Las Vegas already booked in his name, next week will provide the soon to be 25-year-old a chance to sit back and check out the competition first-hand.

“Since I started fighting for the UFC, I haven’t missed any fights from my weight class,” Tukhugov admitted.

Ideally, he’ll step into the Octagon on Thursday night and extend his winning streak to nine against Nover and then spend the rest of his time in Sin City watching intently as Top 15-ranked fighters Tatsuya Kawajiri, Jeremy Stephens, Max Holloway, Chad Mendes and Frankie Edgar all make the walk to the Octagon before the weekend wraps up with bitter rivals Aldo and McGregor blowing the roof off the MGM Grand Garden Arena on Saturday night.

And if things do go as planned, Tukhugov might not just be keeping tabs on the other fighters in his division; he could be scouting a collection of future opponents.