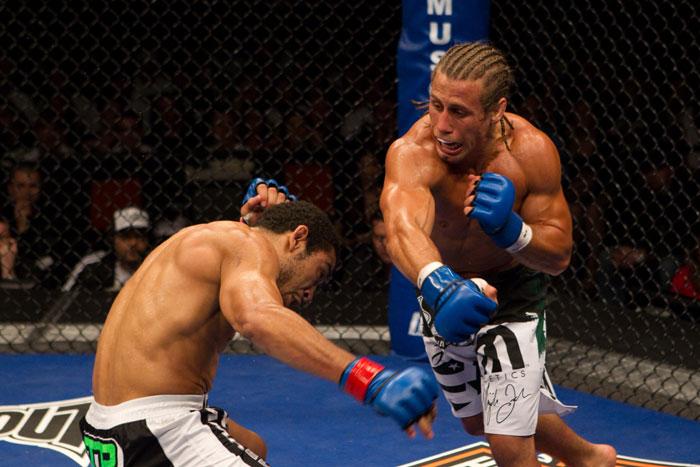 When the history of mixed martial arts is written years from now, they’re going to remember Urijah Faber. Regardless of what happens at UFC 128 on March 19 when he faces Eddie Wineland, or throughout the rest of his career, Faber’s legacy is already set simply for being the one lighter-weight fighter who introduced his peers to the masses.

That’s not to play down the accomplishments of pre-Faber featherweights, bantamweights, and flyweights. But when it came to putting in the long hours in the gym, performing in his fights, and then going on the road as the face of the Zuffa-owned WEC from 2007 on, no one was more tireless.

Ask your friends to tell you the first featherweight mixed martial artist to come into their head, and the name coming back will likely be Faber’s. He may also be the only fighter your teenage sister or daughter knows. That type of notoriety doesn’t come overnight, and it doesn’t remain without being able to deliver on fight night.

“People are gonna fall in love with our weight classes,” said Faber at the New York stop of a 2007 media tour promoting the first WEC show on Versus.  “You’re gonna find that it’s faster, it’s more explosive and it’s extremely entertaining.”

On that first WEC / Versus show in Las Vegas, Faber successfully defended his featherweight crown for the third time by submitting Chance Farrar in the first round. It was a pressure-laden bout for the Sacramento product, and the price an organization could pay for putting all their eggs into one basket, but you wouldn’t have known it by talking to him back then.

“I enjoy what I do and I feel lucky to have the living that I have,” he said at the time.  “Basically it’s a workout all day, hang out with my buddies, eat good food and travel to fun places.  So I’m just enjoying it.  There’s no real pressure.  I’ve kinda been the face of whatever I’ve been a part of, whether it was high school or college wrestling, lower organizations, or now the WEC.  I’m pretty used to being in the limelight, it’s not too different from anything I’ve experienced before, so I’m really enjoying it and I feel like I’m gonna help the organization get to the top and I believe the lightweight fighters are gonna be the secret to that.”

They were. Faber and the gang that came along with him - guys like Jose Aldo, Dominick Cruz, Mike Brown, Miguel Angel Torres, Mark Hominick, and Brian Bowles – exposed fight fans to something they had previously seen only through the wonder of video tapes from overseas or on the local level. It was mixed martial arts sped up from 33 to 78, with more action and technique, and US aficionados ate it up. Faber was the face though, a role he accepted.

“I think it’s a combination of things,” he said in 2007 when asked why he was chosen to be the new face of the WEC. “If you’ve seen me fight, it’s exciting.  When I was wrestling in college, it was the same thing.  I give 100 percent when I’m out there and it’s exciting to the spectators.  I’m well spoken and I’ve got a decent look that’s kinda unique in this sport, so that helps out as well.  But I’ve been winning and there are a lot of guys out there who can talk, a lot of guys who look good, and a lot of guys who are tough, but it’s pretty rare when you’ve got all those together.”

True, and Faber delivered when he was called on. After the Farrar fight he defeated Jeff Curran and then defended against Jens Pulver in the organization’s first Super Fight in June of 2008. He would lose his crown to Mike Brown five months later, but by then his job was done. The WEC and the featherweights were on the international map, and he could have just coasted the rest of the way, but it was after his first WEC defeat that the world then saw the heart of a champion.

After defeating Pulver in their 2009 rematch, two of his next three bouts were against old nemesis Brown and young gun Aldo. He would lose both fights via five round decision, but they weren’t memorable for the end result, but for what Faber endured to get to the final bell. In the Brown fight, he broke his right hand and dislocated his left thumb early on, but he didn’t fold. The Aldo fight may have been even worse as he took kick after kick to his legs, rendering them useless and unrecognizable.

So for all the commercials, interviews, photo shoots, and autograph sessions, Faber was no manufactured hype job. He was all fighter.

Yet the question after the loss to Aldo in April of 2010 was ‘what now?’ He had gone from being a dominant champion with a spot on the pound-for-pound list to an ex-title holder who had lost three of his last five.

Faber’s response? Reinvent himself ten pounds south in the bantamweight division. The first step of the experiment was a success, as he submitted Takeya Mizugaki in his divisional debut last November. On March 19, it’s step two against former bantamweight boss Eddie Wineland, whose last two bouts have ended in Knockout of the Night wins over Will Campuzano and Ken Stone. It’s a tough fight for Faber, but equally so for Wineland, making it worthy of its high placement on the UFC 128 card in New Jersey.

With a win, Faber is right back in the title picture, and what better storyline is there than “The California Kid” looking to become a two division champion against Cruz, whose only pro loss came against Faber in their 2007 featherweight title bout?

Well, there are bouts against Torres and “Kid” Yamamoto, Super Fights that were talked about for a long time when Faber ruled the 145-pound weight class. One of the loudest asking for bouts like that was Faber.

“The goal for me is to make my name legendary in the sport,” he said in 2007.  “The sport’s so young that a lot of the ‘faces’ of the mixed martial arts world are still competing and I feel like I could really put myself down in the history books as one of the best MMA fighters in the world. We need that for the sport and I want to be the first lighter weight guy to do that.  There are a couple of guys out there who are kind of equals with me as far as exposure goes – Kid Yamamoto is one – and having some big historic fights with guys like that would be a huge boost for the sport.”

Faber’s fights with Pulver, Brown, and Aldo were some of the biggest ever, if not the biggest, but there’s more to be done for the now 31-year old. Now he gets to introduce UFC fans to the bantamweights, and while he has some help this time around, there’s still only one Urijah Faber, and when it’s all said and done, you’re going to remember him.