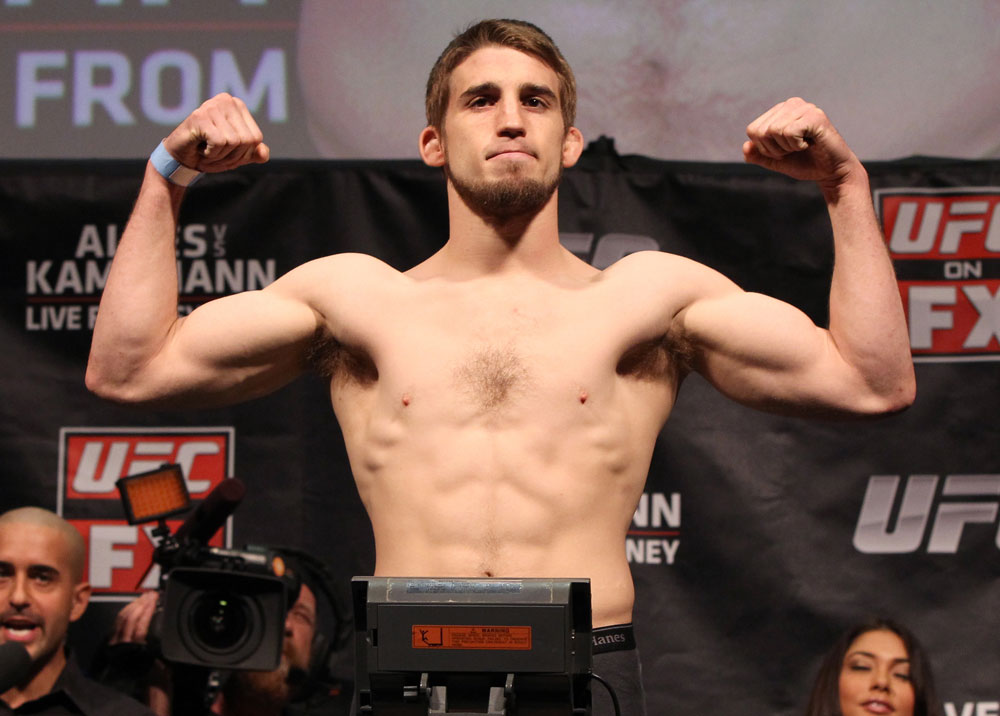 If having Rush’s “Tom Sawyer” blaring from the speakers as he walks to the Octagon on Sunday night in Porto Alegre isn’t enough to get TJ Waldburger ready to deal with Brazilian fans screaming for his head before he faces Wendell Oliveira, he’s had some help at home to prepare.

“The funny thing is, when I walk into the house, I have my family boo me a little bit here and there, so they’re just cheers to me now,” he laughs, obviously not too worried about being the Texan with the black hat on this particular night.

“I like it,” he said of the boos usually hurled at out of towners in Brazil. “It’s the energy, really. Whether good or bad, it pumps me up.”

With 25 pro fights, the 26-year-old from Belton isn’t going to get rattled by much at this point in his career anyway, and after a year away from the Octagon, Waldburger probably would have fought in Oliveira’s backyard – literally – just to get back to work.

“That has been my whole thing right now,” he said. “I hate the fact that I’ve fought only twice in the last two years. That’s ridiculous. But this last year has been nice for me. Not that I’ve wanted it, but it turned into a positive thing. It’s a New Year new me kind of thing. I’m more motivated than I have been in years, and I feel great. My goal is to fight three or four times this year and get the ball rolling. I’m tired of it being ‘hey, I remember that guy’ every year, and people remembering me but me not staying in their mind. My goal is to climb the ladder this year and stay relevant.”

Owner of four Octagon wins, Waldburger is Just 1-3 in his last four bouts, with knockout losses in back-to-back fights by Adlan Amagov and Mike Pyle. But in the last 12 months, he was grounded not by opponents, but by injuries and family responsibilities.

“All people see is what’s on TV,” he said. “A lot of people don’t see behind the scenes. But you have to have a good balance between the two (life inside and outside the Octagon). My balance has been on the other side through injuries and family things, and I’ve been so much on this other side instead of concentrating on what I love to do and my career. So I’m excited to get back into it.”

And as he returns, he has wife Shayla firmly in his corner, a benefit Waldburger doesn’t take for granted.

“As far as the support and everything, she’s amazing,” he said. “I couldn’t ask for a better wife and I couldn’t train as hard as I do without her.”

Shayla Waldburger does have a more unique view of the fight game than most spouses, as she is the daughter of her husband’s head coach John Moore. Now every fighter is tough, but Waldburger must have a little more tough than most in order to date – and then marry – his coach’s daughter.

“It was a slow process, it definitely was,” Waldburger laughs. “We were attracted to each other right off the bat, and we stayed really good friends, but it was a year before I actually put a label on it, and would actually date her. I wanted to concentrate on fighting, but things kept pulling me in until I took a chance. I asked for my coach’s blessing, and he gave it to me. We were young and we had a lot of growing up to do, but we grew up together and got over that. And once I got over that, it’s never been better. We’re best friends.”

That’s really all you need to know about TJ Waldburger. He’s an old soul in life and a young gun in fighting. And now that it’s time to go back to work, he wants to remind everyone who he is.

“I am so excited to get back in there, and just to step foot in that Octagon and to go have fun,” he said. “Even though I’ve been out for a year, it’s been training, training, training. So I’m ready for some dessert.”