"There’s no easy game plan for him (Jake Ellenberger)...I have to fight him
every inch of the fight, and I have to look for my little spots to beat
him." - Nate Marquardt 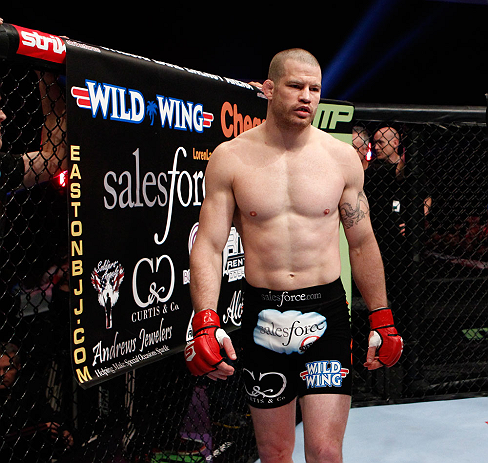 We might as well get the obvious question out of the way immediately when it comes to talking to Nate Marquardt before his UFC 158 bout with Jake Ellenberger this Saturday:

“The leg’s good,” laughs Marquardt. “I did all the rehab for it correctly, I started on it as soon as I got home, and it feels a hundred percent.”

It’s not the usual query, but after taking 55 flush kicks to the leg from Tarec Saffiedine in their Strikeforce welterweight title fight in January, Marquardt has heard that question more than once in the aftermath of the bout that cost him his title via five round decision. In the days after, Marquardt even tweeted pictures of his battered wheel, producing groans throughout cyberspace. It was the kind of assault that would make most wonder why they get up in the morning and do this for a living. But not Marquardt.

“No, but it did make me think ‘man, I probably should have checked those kicks,’”

Again, Marquardt good naturedly chuckles, used to this type of thing after nearly 50 pro fights encompassing nearly 14 years. So while no one likes to lose, especially in a title fight, the Colorado welterweight has learned that to move forward, you have to let the past go. Of course, that doesn’t mean you forget the lessons learned, and when asked if he had looked past Saffiedine and at a return to the UFC, he admits that could have been the case.

“I trained hard for the fight,” he said. “It wasn’t that I didn’t train and it wasn’t that I tried to overlook him, but subconsciously I may have been overlooking him and there were some things that I could have done differently in my camp. I thought ‘I have good enough training in this area, so it’s gonna be good enough,’ but normally my thinking is ‘I want the best,’ and that’s one of the things I didn’t do for that fight, and it definitely cost me.”

The loss came nearly six months after a spectacular welterweight debut for Marquardt, who knocked out previously unbeaten Tyron Woodley to win Strikeforce’s 170-pound title. And though the loss to Saffiedine stung – literally – when Rory MacDonald was forced out of his UFC 158 co-main event against Carlos Condit and Johnny Hendricks was moved up to that slot, leaving Jake Ellenberger without an opponent, Marquardt got a phone call to step in, and he accepted.

“I guess the only hesitation was whether it was a smart move to take a fight against a top level guy on short notice,” he said. “That’s the thing I had to look at most, and I feel like I made the right decision, especially now that I feel like I’m where I’m supposed to be.”

It’s a fight that could very well steal the show at Montreal’s Bell Centre. Ellenberger has one punch stopping power in his fists, and Marquardt can claim the same thing. And yes, Marquardt is aware that he might see a leg kick or two – or 20 – on fight night.

“Oh definitely,” he said. “If I looked at that fight, if it wasn’t my main game plan, it would be something I would try. So I’m not gonna be surprised when he comes out and throws a hard leg kick. I got away from that style of training for a period of time in my career and it wasn’t the right thing to do, especially fighting a guy like Tarec.”

All talk of leg kicks exhausted, Marquardt is aware that Ellenberger has plenty of weapons to bring to the Octagon, whether standing or on the mat.

“He’s very tough, he’s strong, he’s powerful, he hits hard, he’s well-rounded, and there’s no easy game plan for him, like I could just take him down or I could just stand on the feet with him,” he said. “I have to fight him every inch of the fight, and I have to look for my little spots to beat him.”

The bout will be the 33-year-old Marquardt’s first in the UFC since he defeated Dan Miller at UFC 128 in March of 2011. That was when he was a middleweight contender who had faced a Who’s Who of the division, including Anderson Silva, Chael Sonnen, Demian Maia, and Yushin Okami. But if anything, the Woodley bout saw him looking even better at 170 pounds, and he agrees, as he expects to reintroduce himself to UFC fans as a leaner, meaner Nate Marquardt.

“I definitely feel like I’m a much better athlete at 170,” he said. “I think people are gonna see that I have the same explosive and one punch knockout power, but I can go a lot harder and I’m a lot more dynamic, and I think they’re gonna see that. So it’s gonna make the fight a lot more exciting.”