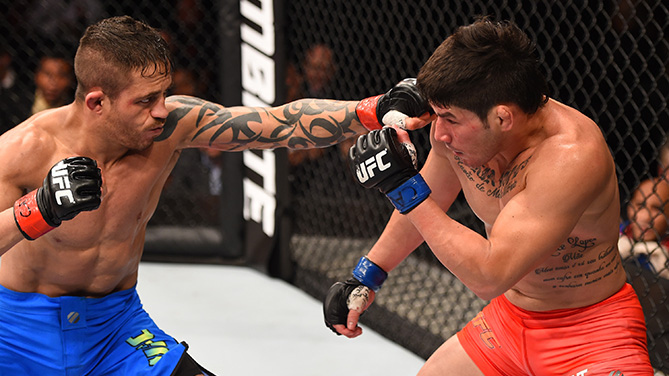 Team Nogueira’s Reginaldo Vieira came back from a quarterfinal loss on The Ultimate Fighter Brazil 4 to make it to the final and win the bantamweight season title, outpointing Team Shogun’s Dileno Lopes in an exciting three-round battle.

“I’m the proof that persistence pays off,” Vieira said.

Rio de Janeiro’s Lopes got out the gate first with some fast strikes, but then it was a trade of guillotine chokes, with both men coming close to a finish, after this exciting sequence, the two slugged it out on the feet until Lopes went for another choke. This time, Vieira got free quicker and the two took a much needed break against the fence before resuming hostilities, both getting in hard shots before the horn, Lopes going back to his corner with his face bloodied.

Not surprisingly, the frenetic pace slowed in round two, Vieira getting the opportunity to peck and poke at his foe from long range. Lopes hung tough, landing hard kicks and punches to the body that kept him in the fight, and in the final minute, a takedown also aided his cause on the scorecards even though he was now bleeding from cuts around both eyes.

After Vieira controlled the early part of round three, a takedown by Lopes with three minutes left evened the score, and with two minutes remaining, he sunk in another guillotine choke on Vieira. The Sao Paulo product eventually got loose and began firing off hammerfists, with Lopes joining in until the final horn, ending the bloody battle with a flourish.