Refreshed Gomi Ready To Put On A Show In Japan 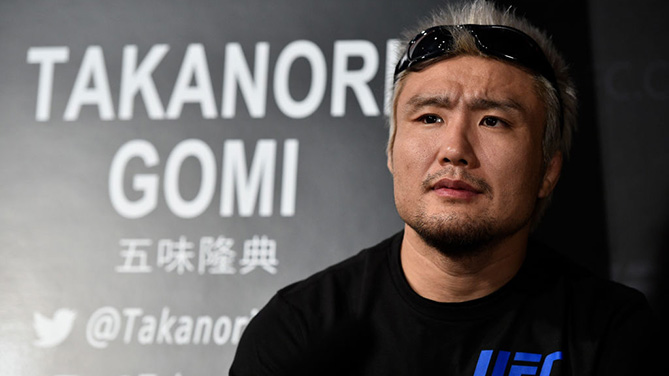 Perhaps the worst thing to ask an active fighter is how he or she hopes to be remembered a hundred years from now. That didn’t stop me from posing that question to Takanori Gomi in the lead-up to his Friday bout against “Maestro” Dong Hyun Kim.

The answer from “The Fireball Kid” was what I should have expected.

“I am pretty sure that I would be dead by then, so I don't mind how they’re gonna talk about me,” he said.

Well, if he doesn’t care, know that the fight fans of that new millennium will, and they will speak highly of the former PRIDE champion who was considered the top lightweight on the planet during his 13-1, 1 NC run in the Japanese promotion.

Gomi’s last PRIDE bout was over a decade ago, though. And in a UFC stay that began in 2010, he’s had a rough go, with a four-fight losing streak following him into Saitama Super Arena this week.

Yet there are signs that the 38-year-old could turn everything around.

First, he’s fighting an opponent that he won’t have to look hard to find and that has been known to ditch game plans in favor of brawling. The last opponent who did that with Gomi, Isaac Vallie-Flagg, teamed with the Kanagawa native to put on a Fight of the Night at UFC 172 in 2014 that marks Gomi’s last victory. He wants to top that.

“I hope to show the audience a more exciting fight than the one against Vallie-Flagg,” he said, clearly confident that he is going to kick off a new chapter in his career. “I recently relocated my gym and that makes me feel refreshed. I am very motivated for the upcoming fight.”

There is one more factor, and it’s that on Friday, he will be in a place where he had some of his greatest moments, Saitama Super Arena. There have been losses in the venue as well, but when Gomi was at his best, fighting him there was like fighting an entire nation of “Fireball Kid” supporters.

“I feel at home whenever I fight in Saitama,” said Gomi. “This is rare chance for me to fight in front of a home crowd, so I hope to show them a blast.”

He may even channel the version of himself that won for the first time in that arena against Jens Pulver in December 2004. In that fight, Gomi was already 4-0 in PRIDE and blasting opponents out. Pulver was the UFC champion who left his lightweight title on the table in a contract dispute two years earlier. To diehard MMA fans, this was the fight to prove who the best lightweight in the world was, and Gomi left with his hand raised thanks to a knockout at 6:29 of the first round.

“Jens was a legend and a great champion,” Gomi said. “I think both of us showed our guts in that fight.”

They did, and while Pulver has retired, Gomi is still here, still looking to hear that roar of the crowd and get his hand raised once more. And while he may not care what’s said about him a hundred years from now, he is happy to have his fans’ support yesterday, today, and tomorrow.

“I am just grateful for having such loyal fans,” he said. “I appreciate their love and support.”