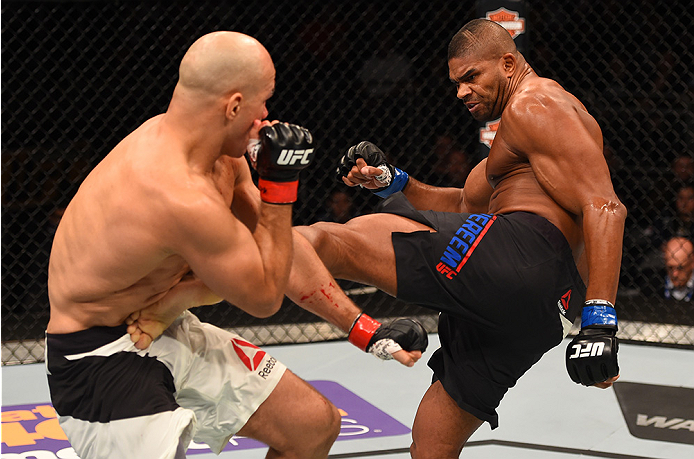 Alistair Overeem started quietly against Junior Dos Santos Saturday in the UFC Fight Night co-main event at Amway Center in Orlando, but he finished with explosive finality as he knocked out the former UFC heavyweight champion in the second round.

“Junior is a very, very dangerous opponent,” Overeem said. “You have to fight cautious with him because he throws bombs. He felt very strong, he was throwing heavy leather, so we had to have this game plan, figure out his rhythm first, and slowly pick him apart.”

Neither fighter threw anything for the first minute of the bout, and by the time the fight was 9- seconds old, the crowd started getting restless. Dos Santos eventually threw first, but came up empty. The tense circling continued as the round progressed, each fighter occasionally throwing, but not landing anything of consequence outside of a couple left hand punches by “The Reem,” one of which bloodied the Brazilian’s nose.

After a low kick by Dos Santos brought a brief halt to the second round, the pace began to pick up, “Cigano” moving forward and Overeem countered with his kicks. The Dutchman was the busier of the two, as he pecked and poked with kicks but few punches. With 1:15 left, a left-right by Overeem jarred Dos Santos and cut him over the right eye. Dos Santos briefly flurried back, but seconds later, a single left hook dropped the Brazilian to the deck. A few follow-up shots ended matters, with referee Dan Miragliotta stepping in at the 4:43 mark.

The lightweight rivals set a fast pace in the first round and didn’t back down from it for the next five minutes. Johnson had his best success with his kicks, particularly to Diaz’ lead right leg, while Diaz slowly but surely got into a rhythm that saw him tagging Johnson with several solid punches.

Diaz’ jab controlled the early going of round two, but once Johnson began timing it, he started getting his punches and kicks off with regularity. What then resulted was a game of “can you top this?” as the two took turns teeing off. With 1:45 left, Diaz took the edge and appeared to hurt “The Menace” on a few occasions, leading the Stockton native to start taunting his foe.

Looking sharper than he has in a long time, Diaz kept alternating between punches that peppered, then pounded, the rapidly tiring Johnson, who couldn’t keep up with Diaz’ pace in the final round. The Floridian kept pushing though, catching Diaz and taking him down in the closing seconds, but there just wasn’t enough time to turn things around for The Menace.

Poland has a new strawweight star, as Octagon newcomer Karolina Kowalkiewicz scored a three round unanimous decision over Randa Markos in the main card opener.

The action was competitive throughout the opening stanza, Markos less orthodox in her striking attacks, but effective nonetheless. Kowalkiewicz wasn’t as accurate as the Canadian, but her counters were crisp when they landed. Where Markos held a decided edge was in the clinch against the fence, a testament to her wrestling background.

Markos looked to put her ground game into gear in round two, dragging Kowalkiewicz to the mat. The Lodz native rose to her feet, but Markos stayed locked on, secured back mount, and Kowalkiewicz was forced to the canvas once more, this time for the rest of the frame.

Kowalkiewicz had her best round in the third, as she landed hard strikes while standing and then reversed a takedown and began firing off ground strikes. With less than a minute left, Markos got back to her feet, but the damage had been done.