Reedus on the UFC and The Walking Dead

The Walking Dead star Norman Reedus checks in before the UFC's 20th anniversary to talk about the sport and his role as Daryl Dixon... 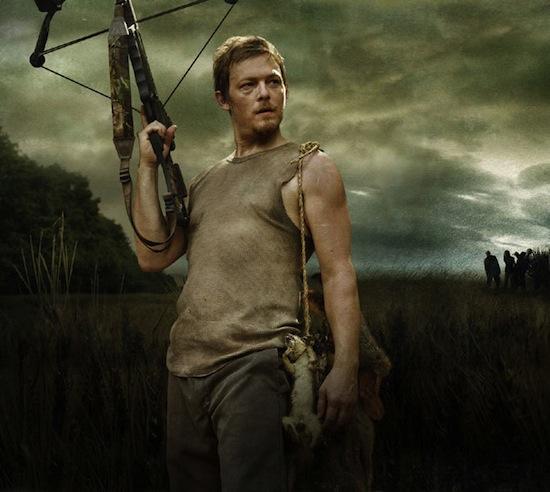 The beauty of mixed martial arts is the reality that behind the visceral thrills of watching two competitors fighting it out in the Octagon there is an art involved – several actually. And when that realization hits you, you’re hooked.

“The first time I saw it up close and personal was when Sean and I did a USO tour,” Reedus told UFC.com. “We went to Dubai, and Djibouti, and Bahrain, and all over Ethiopia, and Sean would spar with all the soldiers. They would line up in a long row, and he would spar with them and get all the way to the end of the line. He would spend all day doing that. He would crawl up someone’s chest, wrap his legs around their neck, and choke them out as he’s talking to people, telling them what he did wrong. And then he’d get the guy back up and say ‘do it again.’ I was so impressed that Sean could pull that off – that guy’s a badass. And it’s not like you go in there and just beat the crap out of each other. There’s an art to it, so it was interesting to watch that from his point of view and have Sean explain that stuff to me.”

Next up for Reedus was the UFC, and once he saw heavyweight contender Roy “Big Country” Nelson do his thing, he was sold.

“I love that guy,” he said of Nelson. “He’s the first person I saw fight, and it was awesome. It’s really, really cool to watch.

“It’s not just the science, but there’s stamina involved and a game plan involved, and it’s kind of a like a really, really hardcore punk rock ballet,” Reedus continues. “People have to time themselves and go toward the other person’s weaknesses, and I remember a long time ago I went to a film festival in the south of France. I was waiting at the airport and the actor Brendan Fraser was there. We were both waiting, and he said ‘what movie do you have at the festival?’ And I told him Six Ways to Sunday, this cool little indie film that I did, and I said ‘what about you?’ And he said George of the Jungle. Okay, cool. Then I kept seeing him at parties and I went to go to the screening of George of the Jungle and that dude got ripped for that role. He put in so much work to look that awesome that I just had to applaud. Anybody that puts that much work into something, you have to bow down. It’s that way with the fighters. I know to be a professional athlete you have to put in a lot of time, and it’s a 24/7 job. It’s a very respectable thing to be a professional athlete.”

Now the only thing left is for Reedus to get to a live UFC event, and he’s down for it, saying “I would love to make time to fly in and see an event. That would be awesome.”

But for now, Reedus is a bit busy in Georgia, filming The Walking Dead, a process that keeps him down south for seven months out of the year. It’s a rigorous schedule to say the least, but as he points out, “It’s like having seven months worth of Christmas, so I’m not really complaining.”

There’s good reason for him to be happy, as the series is not only critically acclaimed, but one of the most popular series on television today. For the 44-year-old actor, that’s no surprise.

“When I read the pilot way back when, I knew it would be special,” he said. “I knew the people that were attached to it, and AMC was pretty much the only channel I was watching on TV, so that was a bonus. And with Gale Anne Hurd and Greg Nicotero, and Frank Darabont doing the pilot, it was so different from all the other scripts out there that were coming on TV that I knew it would be special. And to tell you the truth, when I read it, I didn’t really see it as so zombie-oriented. I thought it was mostly about the characters, and it turned out that way, which is I think is part of the reason why it’s such a big hit.”

Another reason is Reedus’ turn as the crossbow-toting Dixon, and his popularity is made even more impressive when you consider that the character wasn’t even part of the original comic series by Robert Kirkman. And when you win over the diehards, that’s saying something.

“I’m grateful for it, for sure,” he said. “I remember Robert Kirkman, right from the beginning, they asked him who his favorite character was, and he said Daryl. And he’s kind of the king, so whatever he says, everyone’s going to follow because he’s the one that’s created the whole thing. After I got his blessing, I knew I’d get the other blessings. It’s been quite a ride, and I’m having the time of my life.”

So what is it about Dixon that has captured the imagination of fans around the globe?

“With all the characters, your clock is ticking, everyone’s infected, and your life is completely different than it used to be,” Reedus explains. “It’s like, what are you gonna fight for, what are you gonna stand up for, what type of person do you want to be? This is your chance to fight for what you want to fight for, or not, or curl up in a ball and throw your hands up in the air. And I think people watch the show and they identify with the different characters. You see people pushed to the limits, but also having to make decisions, and there’s no more BS. There’s no Instagram and there’s no Starbucks, there’s no Facebook. There’s no trying to make yourself look good to impress people. There’s none of that stuff, so it’s real people doing real things, and their lives are always at stake, so I think people identify with those characters and they identify with Daryl that way as well. He wears his heart on his sleeve and believes in what he believes in and everything he says, he means. I think those are a whole bunch of the reasons.”

And when Reedus says that he appreciates where he’s at, he means it, because while most actors are fortunate to get one iconic role, he’s had two, with Dixon and the Boondock Saints’ Murphy McManus.

“Somebody sent me a tweet one time and it said ‘How does it feel to be Murphy McManus and Daryl Dixon?’” he said. “And it hit me. It’s true, if you get one of those in your life it’s kind of a big deal, but to have two of them, I just feel extremely lucky. But don’t they come in threes?”

He laughs before making it clear that he’s currently got nothing up his sleeve to reveal. Well, maybe something regarding the rest of The Walking Dead season.

“You ain’t seen nothing yet,” said Reedus. “I can honestly say that.”

The Walking Dead airs every Sunday night on AMC