The Redemption of Niklas Backstrom 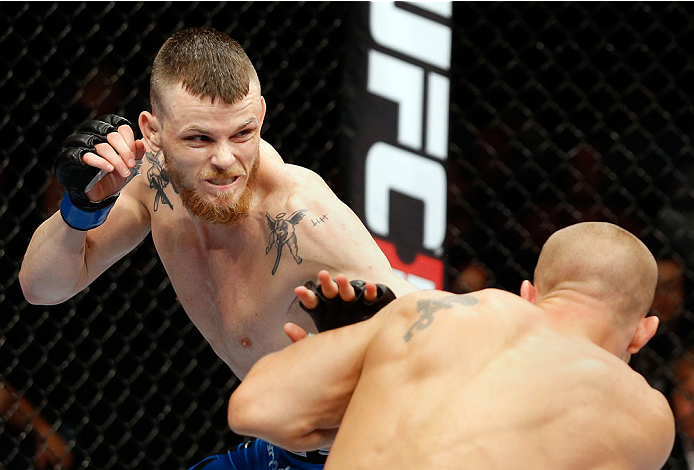 When told that he approaches life in the fight game a lot differently than most of his peers, featherweight prospect Niklas Backstrom laughs, but he doesn’t disagree.

“I’m totally opposite in a lot of ways,” he said. “But there are a lot of guys and we’re all different.”

That’s a good thing, because this or any other sport would lose its appeal if all you saw wheeled out into the Octagon, ring, field, court or rink were a bunch of robots with no personalities, regardless of athletic skill. That’s not the case here in mixed martial arts, but the 25-year-old Ornaset, Lulea, Sweden native is more unique than most. Take his fight this Saturday against Noad Lahat in Berlin as an example. Despite having won his UFC debut in the same O2 World Arena where he will be fighting this weekend and being the resident European in the bout, he wouldn’t mind hearing a little booing. Correction, he wouldn’t mind being hated on fight night.

“Honestly, I hope everybody there hates me,” said Backstrom. He laughs, but only because he knows how bizarre that sounds. “It’s a nicer feeling. I don’t know why, but I fought a lot in Finland and places like that, and they’re pretty vocal about their dislike for us, but I really enjoyed that feeling of coming in and being hated. Now I get so humbled every time somebody wants to take a picture or get an autograph or anything like that, but when it’s fight time, I like to be hated.”

It’s hard to hate the Swede though. Not only is he an interesting personality, but he can fight, and he can finish. And while he currently sits at 1-1 in the Octagon, with a Performance of the Night win over Tom Niinimaki in his debut and a knockout loss to Mike Wilkinson last October, you get the impression that win or lose, something exciting will always happen in a Backstrom fight for the simple reason that for him, these are fights.

“We’re going to fight,” he said of the Lahat bout. “I got into this sport before it was classed as a sport here in Sweden, so I had to learn how to conduct interviews so you don’t sound like a crazy person. (Laughs) Now, I don’t even care how he (Lahat) is in this fight. I’m gonna go in there and do my thing and show I’m a good fighter. Obviously so is he – he fights in the UFC, and I’m really trying to keep the respect for him because I used to really think that I’m a lot better than my opponents when I watch them. But I have to keep the respect for him and his abilities.”

It’s the key takeaway Backstrom had from his upset loss to Wilkinson.  Unbeaten in nine pro fights heading into the Stockholm bout, Backstrom was riding high and expected to put another checkmark in his win column. Wilkinson had other ideas, ending the fight in just 79 seconds.

“I had beaten the top guys in Europe on one week’s notice with no training and destroyed them,” he said. “And then I fight a guy that’s not even top ten, and I had four months to prepare and I lose. So I’ve got to stay focused and go in there treat this seriously and not like a game. I think in my head sometimes, how am I going to explain this to my future kids, that I got knocked out in the Globe?”

Backstrom chuckles, saying he knows that previous statement sounds weird, but it’s obvious that he isn’t one of those “I just had a bad night” guys. When asked how long it took him to get over the defeat, he said, “I think it’s going to stick with me for the rest of my life. It was a good lesson to learn. It wasn’t fun, that’s for sure. I got caught and I had to pay the price, and I think it’s going to bother me for the rest of my life, I think.”

That doesn’t mean he stays in a rut forever. He’s moved on, he’s ready for Lahat, and as far as his fight with Mike Wilkinson goes, he learned a lot.

“Of course there are lessons to take away,” Backstrom said. “You can say all you want that I was landing all the shots and he got a lucky shot or whatever, but I still gave him the chance to land a punch like that by not using my reach, and by not respecting his ability to hurt me. That’s a lesson I had to learn – to respect my opponent’s abilities. I think I was a lot better than this guy and I think I should have won this fight. I just f**ked up, basically.”

Knowing that there was something wrong is half the battle; fixing it is the other half, and as he mentioned earlier, he’s taking Lahat very seriously and he’s prepared accordingly at the renowned Allstars Training Center. It’s a place home to Sweden’s best, including Alexander Gustafsson, and knowing that some of his teammates have been through what he has must be a good thing, right?

“I’m Northern Swedish so I don’t know if I’m good at taking that kind of advice,” he laughs when asked if he sat down with his teammates to discuss his last bout. “I’m not really a guy to go ‘how was it for you when you lost, how did you feel?’ That’s not me. I take a loss and it’s all on me. It was my fault. I was better than the guy and I got caught. It’s on me to get back, and I can say a lot of things, but I have to live up to what I know I can do technically and physically in the sport.”

Yeah, Niklas Backstrom isn’t your typical prizefighter, but that doesn’t mean what he’s doing is wrong. In fact, he may have the best solutions of all, and we’ll start to find out if his methods are working come Saturday night.

“I want to fight a lot and keep on winning, and I want to prove myself again because I feel a tremendous amount of shame for my last fight,” he said of his plans for the rest of 2015. “That was the only feeling after my fight and I want to redeem myself.”