The Redemption of Fabricio Werdum 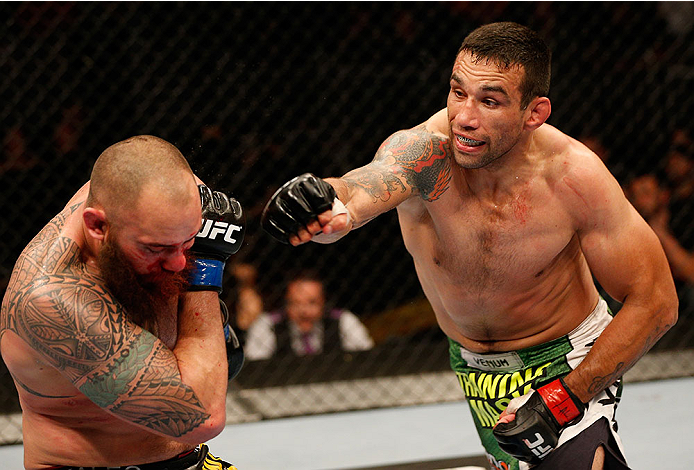 In a sport where adversity is a built-in requirement, fighters are equipped to travel a path filled with obstacles and challenges. With every step taken up the ladder toward the end goal of becoming a champion, the resistance will increase with every rung as those trials by fire will ultimately shape and prepare the fighter for the next road ahead.

Back in 2008, Fabricio Werdum believed he was ready for what the future held for him. The Brazilian grappling ace was an accomplished world champion in BJJ and he had parlayed those talents into a successful run under the PRIDE banner. While he would stumble in his first showing inside the Octagon against former two-time heavyweight champion Andrei Arlovski, “Vai Cavalo” would rebound in impressive fashion by scoring stoppage victories over established talents Gabriel Gonzaga and Brandon Vera.

With those wins, Werdum was poised to make a run at the UFC heavyweight title. All he had to do was derail undefeated prospect Junior Dos Santos at UFC 90. What unfolded that night in Chicago would not only lead to his release from the biggest promotion in MMA, but it would later serve as the perfect example of just how ready he is to become a champion.

“I had never been knocked out in my life,” Werdum said of his bout with Dos Santos. “It was my fault because I wasn’t training hard enough to fight at that level. I didn’t take advantage of the moment the first time around.”

The Kings MMA product wasn’t prepared to handle that responsibility then, but the road he’s traveled in the six years since has been nothing short of spectacular.

Werdum would go on to claim victories over some of the most successful heavyweights in the history of the sport, and re-solidify his place as a threat to the UFC heavyweight crown in the process. The 37-year-old Rafael Cordeiro-trained fighter has won seven of his last eight showings, including four straight wins, with his most recent outing resulting in a one-sided destruction over highly touted striker Travis Browne back in April.

“Hapa” was figured by many to be the next in line for a shot at Cain Velasquez and a win over Werdum would bring that to fruition. Browne was a heavy favorite going into the fight, but that was a memo Werdum and his camp never received. Where the Hawaiian was figured to tool Werdum on the feet, the Brazilian veteran proved far too savvy and game as he battered his foe for 25 minutes inside the Octagon.

In the process of putting a drubbing on Browne, he not only earned a shot at the heavyweight title, but silenced any doubt that he deserved it.

“People were talking about how Travis was the favorite and how dangerous he was. That just made me stronger. I broke his nose with my punches and his ribs with one of my kicks. I demonstrated I was ready for this moment. I broke Travis Browne’s game plan and destroyed him mentally. I knew I could beat him and I showed the world I’m ready for the belt.

And while he couldn’t appreciate the added resistance that comes with getting close to a title shot back in 2008, Werdum is thankful for the path he’s traveled as it has led him to a championship opportunity at UFC 180 where he will square off with Mark Hunt for the interim heavyweight title this Saturday night in Mexico City.

He is determined to make the most of his chance to claim UFC gold and is willing to do whatever it takes to make that happen, even if that meant leaving the comforts of his Los Angeles home two months early to train in the mountains that surround Mexico City. The elevation of the Mexican capital ranges anywhere from 7,300-12,000 ft. and competing in such thin air has proven to take a toll on the fighters who compete in that environment.

With UFC 180 being the biggest moment of his career, Werdum and his team wanted to make sure they were acclimated, and they dedicated the two months leading into fight night to doing so.

“The elevation in Mexico City is very high,” Werdum said. “I did my training at almost 12,000 ft. We knew that coming here early would make a difference. We came out two months before the fight so I could get adjusted to the elevation.

“The hardest part is not fighting on fight night. It is all the training that is done to prepare and waking up at 6 a.m. to go train in the mountains. Working out really hard, being tired and not wanting to keep training. And then go back to training 100 percent. The hardest part about training in this altitude is adapting. The first two weeks I was here it felt as if I had never trained before at all. I was so tired.”

Where Werdum’s quest for a title shot is storybook-worthy, the man who will share the Octagon with him has written his own chapters of redemption. “The Super Samoan” hadn’t won a fight in five years when he came over from PRIDE to the UFC in 2010, but four years and five victories later, the former K-1 champion has established a passionate following that has continuously campaigned for Hunt to get a title shot.

When champion Cain Velasquez was forced off the card at UFC 180 with a knee injury, the UFC tapped the New Zealand native to step in against Werdum. And while Werdum can appreciate the dangerous skills Hunt will bring to the Octagon on Saturday night, he also believes taking the bout on short notice and the lack of time to prepare for elevation in Mexico City will all work out in his favor.

“We are going to have a different plan than we had for Cain Velasquez because of Mark Hunt’s style of stand-up. I know he has a strong chin, but if I have an opportunity in the second or third round when he’s tired, I’ll submit him or knock him out. I will represent Latin America, Mexico, Brazil and my family. I will fight a good fight and be the new UFC champion.”