The Recovery And Return Of Josh Emmett

Featherweight Details Brutal Healing Process On The Road Back To UFC 269 Bout
By Steve Latrell, on Twitter: @TheUFSteve • Dec. 9, 2021

The last time Josh Emmett stepped into the Octagon nearly 18 months ago, he was facing two different adversaries. The first, of course, was Shane Burgos; a headache for any opponent. The second was his knee, a torn ACL which failed him almost as soon as the fight began.

“It happened in the first 19 seconds of the first round. I kind of blitzed in and I just felt the worst pain. A lot of people talk about how we [fighters] have a lot of adrenaline and stuff like that, so we don't feel anything. Like 100% I felt everything. I had no stability in my knee. Every time I put weight on that lead leg it would just buckle, and it was excruciating.”

Even with his body betraying him at the most inopportune time, Emmett was still somehow able to go the full fifteen minutes and leave the UFC Apex that night with his 16th professional win, not to mention Fight of the Night honors. (The matchup is detailed in the video clip on this page.)

“I looked at the clock. I had about 14 and a half minutes left…and I just know myself. I said, ‘You’ll be happy in 15 minutes. Just dig down deep and let's try to get the win.’ Even though I couldn't move as much as I wanted to, I couldn't stick to the game plan I wanted to, in the end it worked out well for me.”

It worked out well in the continued advancement of one of Team Alpha Male’s most thrilling and dangerous talents, but not so well in the recovery of the knee.

“I went into surgery about three weeks after the injury. I was kind of debating getting the surgery just because I felt really strong. But I feel like I have a long career left, so I know it's probably important to do so.”

Makes sense, to be sure. But he couldn’t have anticipated the journey that would ensue once he did.

“I did the patellar tendon graft on July 10th. I was into PT the very next day. I stayed in Vegas for six weeks after that, doing PT twice a day, working with Bo [Sandoval] once a day and I was feeling great. But I still had pain on the anterior part of my knee, like the patella and slightly under that. So after four months I got another MRI and then the doctor said ‘No wonder why you have so much pain there, because your patella tendon is still torn, it never healed.’ And I had a huge fracture on my kneecap; where they took the actual graft, that never healed.

“So I came back to Sacramento. I was doing PT here. I started talking with one of my friends that's an orthopedic surgeon. He's really well known as far as the stem cells and we did a stem cell procedure.”

Almost as painful as Emmett’s ordeal is listening to him describe it acute detail. It’s not for the faint of heart.

“That procedure was another painful thing. This is where they drill into my SI joints on both sides. They extract the bone marrow from my hips and then they inject it into the bone straight through the patella straight into the patella tendon to hopefully stimulate the growth hormone or growth factors to start healing.

“I was on crutches for another two weeks; non-weight bearing. I was in another brace for six more weeks and got back into PT after that, still having a lot of pain.

“I did a hyaluronic acid injection which a lot of people that are older and have osteoarthritis, get this in their seventies, eighties, whatever. So I got that done and I'm making progress now. Things are healing. I'm doing a lot more, so I can't complain.” 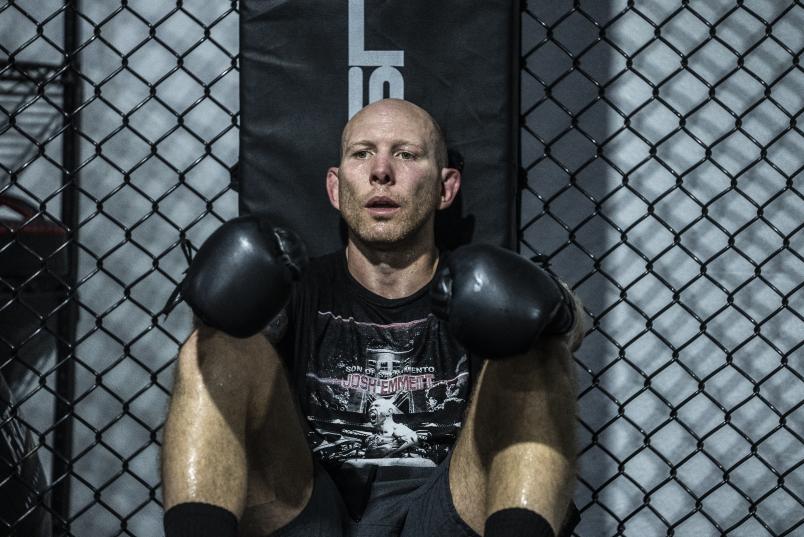 He’d be forgiven for complaining, but that’s not Emmett. Despite the anguish, the 36-year old has retained his easygoing demeanor and lightheartedness. He took a decidedly stoic mentality towards his situation, careful not to let his physical pain turn into psychological agony.

“I feel like with everything, whether you win, you lose, you learn from them. When you get into a tough fight and you injure yourself, you learn a lot about yourself, whether you have to dig down deep and you're tired or you're injured, and same thing with this. This is a major injury. I've had a lot of injuries and this has to be… at the top of the list. But I have learned a lot about myself. It's just patience and I've gotten better in different areas of my game. I've strengthened other things that I needed to work on.

As he watched the world turn during his recovery, he didn’t see anything in the featherweight division that concerned him in terms of needing to make up for lost time.

Unsure that he’d have any activity of his own this year, Emmett was surprised and encouraged that his recovery will allow him to notch a fight before 2021 concludes. He meets Dan Ige on the featured prelim of UFC 269: Oliveira vs Poirier. 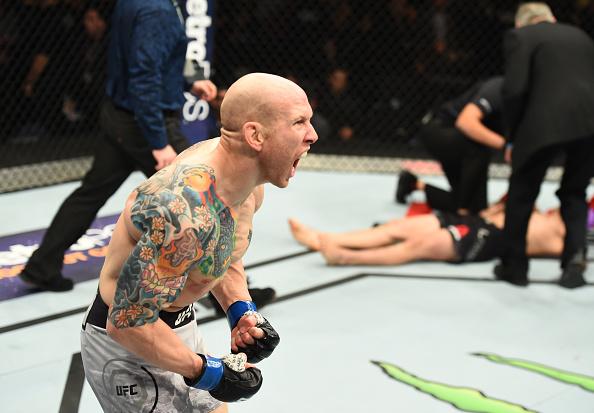 “Fans are excited to see this car wreck coming up on Saturday night,” he beamed at the UFC 269 media day. “Just because of the similarities: he comes forward and the pressure he puts on. He’s so durable, he takes shots and you can’t get him out of there. He keeps coming. And I’m the same way, too. I will never give. You literally have to put me out or catch me in something. Bone sticking out of my finger? No ACL? I’m not quitting.”

That’s not fighter tough talk. Anyone who has watched him fight has witnessed Emmett’s interminable grit. On paper, it could easily be another Fight of the Night.

“I'm finally seeing the light at the end of the tunnel,” he says. And while he wouldn’t wish his most recent ordeal on his worst enemy, he’s emerged feeling stronger and more resilient than ever.

“I think everything happens for a reason; I've been saying that my whole career.”