Recharged Bader Has Some New Tricks Up His Sleeve for Brilz

"Overall, I'll be more technical and a better fighter on my feet, on the
ground, and just everywhere. That's what I'm looking forward to -
putting on a good show and getting the win." - Ryan Bader 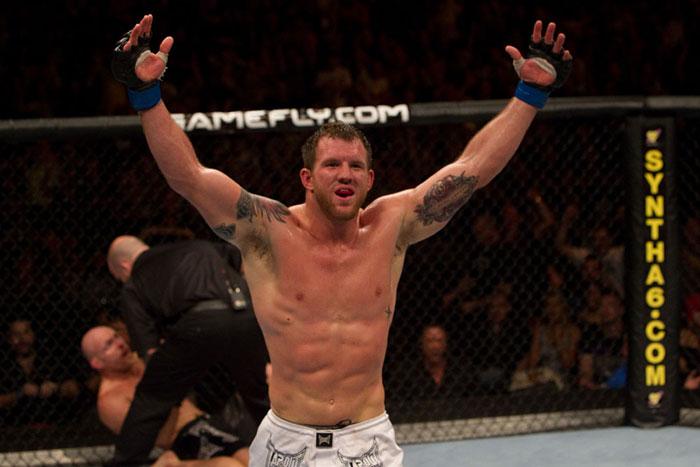 “There is nothing wrong with change, if it is in the right direction.” - Winston Churchill

No one remains undefeated forever. That goes double in the UFC’s light heavyweight division, which features a litany of 225-pound athletic, super freaks cutting down to 205 to throw their high-speed knuckle bombs with only a strip of leather to cushion the blow. The Ultimate Fighter season 8 winner Ryan Bader learned that the hard way by racking up back-to-back losses by guillotine choke this year. While that was a difficult lesson to digest, Bader believes he has made the necessary changes to bring him not only back to his usual winning ways, but push him further as one of top fist-missile throwers inside the Octagon.

“It was kind of a weird place where I was at,” says Bader about his mindset following the loss to Tito Ortiz at UFC 132. “I was winning before using a certain style, whereas now I'm a lot better fighter than I was - better technique wise. It became, do I use this better technique or do I go back to the old me where I was going out there and throwing big overhands all the time trying to knock people out or do I be more technical and keep evolving? It was hard to say 'keep evolving' because of having two losses in a row. I feel like I had gotten to the point in my standup where I was hitting a plateau with some people and I got some new people and it has opened up a whole new world for me to see what striking is really like and how it works for me.”

“So I'm going to go back to being that same fighter, but a more technically sound fighter,” he continues. “I think I was missing some aggressiveness and was flat in the last couple fights. Looking at my training camps, I think I was over-training. My fellow training partner Aaron Simpson felt the same way and now in his last fight he felt great with different people running our training camps. Before, we were just killing ourselves day in and day out and when it got closer to the fight we felt like we had to put more and more in, which just beat our bodies down. Now, we've got the right formula in not over training and the right coaches. I'm ready for this fight and I'm excited. I want to go in there and get the win. I feel good. I feel like everything is in place. Mentally, I feel good and physically I feel I'm the best fighter that I have been since I first stepped into the Octagon.”

At 28 years old, the two-time NCAA Division I All-American wrestler from Arizona State University is not a star struck rookie under the bright lights of elite level competition. Bader knows the ups and down of sports - you win some (13) and you lose some (2), but you progress to do better next time. After three years of fighting inside the Octagon, including winning TUF 8, Bader is experiencing a rough patch, but in some way it is a blessing in disguise. Bader has re-evaluated what he was doing in training, addressed what he believed were problem areas, and feels he has improved overall because of it.

“The first fight with Jon Jones was my first loss and a big fight, but what happened with Tito - I had to just put it behind me and move on,” explains Bader. “I actually acted upon it this time and made changes and it has gone great so far. I'm glad that happened because I don't know if I would have done any of that if I had went out and had beaten Tito, and I don't think I would have had made any changes. I wouldn't have evolved to the point where I'm evolving right now. Losing sucks. It is a horrible feeling. I hated losing in college wrestling and I hate losing in MMA. I want to put on an impressive performance and get a win, first and foremost.”

The key change was hiring Tom Vaughn as head coach. The ASU cagefighting triumvirate of Bader, CB Dollaway and Aaron Simpson started their own gym last year in Gilbert, Arizona, entitled Power MMA & Fitness. While putting together their own MMA sanctuary, the team didn’t lack for excellent training partners or specific style coaches, but they didn’t have an overall head coach to help blend it all together, as well as be the overseer monitoring their training. They solved this by bringing in Vaughn from the Fit NHB gym in Albuquerque, New Mexico, as he’s a coach who has groomed such notable fighters as Carlos Condit.

“He has helped us out a tremendous amount,” boasts Bader. “Having that gameplanning, having that overall head coach. He's been in the game for a while and he knows MMA. Before, we had individual coaches as far as a Muay Thai coach, boxing coach, a jiu-jitsu coach. They all want to see you excel in their discipline and rightfully so. They want you to use your kicks, use your boxing and so forth. But the head coach can come in and see your overall game, get a gameplan down, and oversee your practices. It's so when I show up to the gym, I don't have to worry about what I'm doing, I can just do what the coach says. I've been working a lot on restructuring my game for what best fits my fighting style. I've dropped some things and added some things and I think it really has helped out. I feel like a totally new fighter, especially in the standup area. I've learned from the loss and I'm happy with all the changes we made.”

The first chance to put Bader version 2.0 into action will be on November 19th at UFC 139 against Jason Brilz. The three-time NCAA Division II All-American out of the University of Nebraska at Omaha is in a similar situation as Bader, as he’s suffered back-to-back losses and is in desperate need of a win. Brilz lost a controversial split decision to Antonio Rogerio Nogueira at UFC 114, followed by a totally uncharacteristic one-punch knockout loss to Vladimir Matyushenko at UFC 129 in April. Brilz and Bader are both great wrestlers, both are durable, both have heavy hands, and both need a win, which should equal a gritty and exciting light heavyweight bout.

“Jason Brilz, every fight he is in, you know he is going to come after you for three rounds hard,” affirms Bader. “There's no quit in him at all. He had a great fight with Nogueira. We have a few common opponents in Eliot Marshall, ‘Red’ Schafer and Nogueira, and he comes after you. He might not have the most technical standup, but he has power in his hands and every punch he throws is hard. You don't want to take too many of those. He obviously has a good wrestling background and good submissions. He's a dangerous opponent and I'm ready for him.”

It seems counter-intuitive, but fight fans should know by now that with two powerful wrestlers squaring off in the Octagon, it usually means one thing: striker’s duel. “They'll see a lot more polished standup where I will actually use it,” asserts Bader, who has shown marked improvement in his standup since his UFC debut, but he believes we’ll see a whole new beast entirely. “Also, a lot of little stuff I’ve learned, like little ground and pound stuff that I had never seen before and little transitions. Overall, I'll be more technical and a better fighter on my feet, on the ground, and just everywhere. That's what I'm looking forward to - putting on a good show and getting the win.”

The one thing that hasn’t changed this past year is Bader’s confidence in himself as a professional fighter. Only fighting three or four times a year in a sport where a fight can go from bad to worse to over in a couple seconds, it’s difficult to gauge how much better a mixed martial artist is than they were. MMA isn’t a sport for individual statistics; it only has the fatalistic win or loss. The athlete themselves can see or feel when they have gotten better. Bader knows without a doubt he is better at this sport now and he aims to show the UFC fans against Brilz.

“The fighter I am today, I would destroy myself even a year ago,” declares Bader. “I guess you don't realize it because you are in here every day and you don't realize how you're growing as a fighter. It's kind of like a parent who might not notice how much their kid is growing as opposed to someone who hasn't seen them for a few months. I feel like that's how it is in the gym, in the trenches, but you do realize it. Like I've had sparring partners that would beat my ass back in the day that I went with recently and I was like how did that ever happen? Your progression is about being around the right people and the right training partners and that's what we have going on now. We've always had our core training partners and we've gotten even more now and a great coaching staff. I've brought in guys who are like Brilz that are great wrestlers. I feel better going into every camp, especially with these losses, and trying to get better for the next win. It forces you to get better. If you're not trying to get better after a loss then you don't need to be in this game.”

This weekend, a re-focused and re-energized Bader will look to put the pressure on Brilz and secure his first win in 2011. “I really feel I can go out there and get a finish in this fight, whether that's on the feet or getting on top and ground and pounding - I really do feel like I'm going to catch him,” says Bader, who wants to get back to playing the alphabet game in his favor by earning some W’s with a few TKO’s meaning a whole lot of L’s for his opponents. “The stuff that I have evolved with in my standup is going to throw a lot of fighters off if they're looking at my past tapes. He's going to be expecting one fighter and another fighter is going to come out there and he's going to be in trouble. I'm looking to go out there and definitely finish him.”

We’re all taught that everything in life isn’t about winning or losing, but who are we kidding? No one plays a sport, especially professionally, to lose. At UFC 139, Bader is going to try and tear Brilz’s head off if he gets the chance.