"I’ve been chomping at the bit to get in there and get down and fight,
and I hope that everyone who sees this fight sees that I’ve got a new
focus." - Rick Story 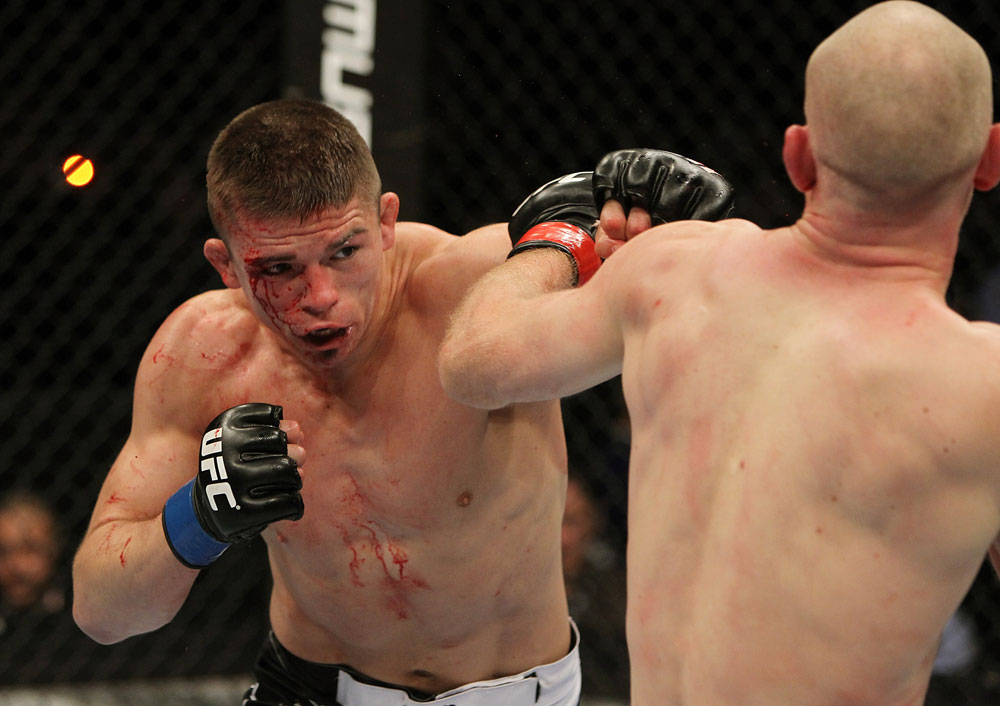 So while being aggressive and taking everything that came his way just in order to fire back with his own barrage of blows worked to the tune of six consecutive UFC wins from 2009 to 2011, when he kept that aggression in taking a June 2011 fight with Nate Marquardt just five days after defeating Thiago Alves at UFC 130, he found out that he may have bitten off a little more than he could chew.

Of course, he didn’t know that at the time, so as he fielding seemingly endless questions wondering whether he was ready or not, his answer and resolve never wavered.

“As many times as it was asked of me, I responded the same way every time,” said Story. “It’s like ‘no, I’ve done it before and I’ve done my best while I’m still in shape and don’t have that long to train before I’m fighting again.’ But then again, that was before, and there wasn’t as much attention and as many distractions. So physically, yeah, I was ready, but mentally, no.”

Fighting below the mainstream radar for much of his career, the Washington state native lost his first UFC bout to John Hathaway in June of 2009, but then began his winning streak, winning four straight before a decision win over previously unbeaten Johny Hendricks put him on the world radar. The win over Alves in May of 2011 only added to his level of acclaim, and soon everybody wanted to talk to Rick Story, especially after he agreed to face Marquardt.

“It was just an emotional rollercoaster because that whole time, it was the biggest fight of my career and I had all that pressure, and I got that all off my chest and then all of a sudden a new dump truck load of pressure came on and then I got a whole bunch of media attention that I wasn’t used to,” he recalled. “Everything happened at once. It seemed like I had so many interviews after that Alves fight, not only because I beat Alves, but a few days later I accepted a fight with Marquardt, so it was like the conversations were doubly in-depth. In retrospect, it probably was a little too soon, and I probably wasn’t as seasoned as I should have been as far as the media attention, and it kinda took my focus away from training and fighting.”

Things would only get worse for Story, as Marquardt wasn’t licensed in Pennsylvania, and hometown hero Charlie Brenneman came in on one day’s notice to replace him. Not only was Brenneman a different opponent, but he was a different style from Marquardt, and as the stirring three round win by “The Spaniard” that next night in Pittsburgh became one of the feel good stories of 2011, forgotten was the man on the other side of the Octagon that night.

“Right before that I had trained for Alves and I trained for Marquardt, and they were both jiu-jitsu guys with really good standup,” said Story. “And Brenneman is the opposite. He’s a really fast, explosive shorter wrestler, and I was seven months de-trained from that because I wasn’t ready for that kind of opponent. I still should have been on point, but I was a half-step behind that whole fight.”

Five months later, Story would suffer a second consecutive defeat, this one by decision to Martin Kampmann at UFC 139, and as he enters a bout with UFC newcomer Brock Jardine this Friday, he says “Right now I’m on the chopping block, so I have to be at my best.”

That’s a hard concept to fathom, especially when you look at Story’s body of work in the UFC and his willingness to fight all comers, even at a moment’s notice. But that just may be the motivation he needs – at least in his own head – to keep him on point.

“That’s the way I think because I’m not where I want to be,” he said. “I want to be a champion, and if I get comfortable, then all of a sudden I lose fights. There’s always somebody out there that’s working just as hard as I am, and if I decide to get comfortable or take a practice off, that person may be training at the same time, and that just might be the edge.”

But for Story, a few months off to heal up some nagging injuries and recharge his batteries may have been the best remedy for the second half of 2011.

“It was a learning experience and losing those two fights was crappy, and I hate losing, but in another sense looking at it from a positive standpoint, it’s really made me learn a lot as far as training smarter and mentally preparing myself.”

And despite Jardine being his third opponent for this date after injuries sidelined Rich Attonito and Papy Abedi, he’s eager to get back into the Octagon and pick up from where he left off at the Alves fight.

“It (the time off) was good because when you do things over and over, you have the motivation to do it, but it kinda gets repetitive and you get worn down and you don’t realize it,” he said. “It wasn’t necessarily a vacation, but it was time to refocus and get that inner desire to go in and compete and go in and fight back.  I’ve been chomping at the bit to get in there and get down and fight, and I hope that everyone who sees this fight sees that I’ve got a new focus and that I’m coming in as even more seasoned and experienced overall.”