If You Still Need Convincing, Here Are Five Reasons To Tune In To UFC 264: Poirier vs McGregor 3
By Maddyn Johnstone-Thomas, on Twitter @MaddynThomas • Jul. 9, 2021

It’s finally here. For the first time since March 2020, there is a UFC event in Las Vegas with fans in attendance at T-Mobile Arena. The card is stacked, and it is time to settle the score.

Here are the reasons to watch UFC 264.

If all you need is one reason to watch UFC 264, this is it. It’s the fight everyone has been talking about and could be the biggest fight in UFC history.

It’s no secret that there is a fierce rivalry between No. 1 ranked lightweight contender Dustin Poirier (27-6) and No. 5 Conor McGregor (22-5). After his second-round knockout victory over McGregor at UFC 257, Poirier said that the two “owe it each other” to have one more fight to settle things once and for all.

The fight comes with high stakes for both fighters. Following his victory over McGregor, Poirier was given the chance to fight for the UFC lightweight title vacated by Khabib Nurmagomedov upon retirement; however, he passed on the opportunity to pursue the trilogy bout with McGregor. If Poirier secures a win, there’s a chance his next fight could be a title shot against the current UFC lightweight champion Charles Oliveira. Poirier has the most knockout wins in lightweight history with seven and he looks to push it to eight this weekend.

McGregor will attempt to get his revenge and avoid back-to-back losses for the first time in his career. This will also be the first time that McGregor is fighting twice in one year since 2016, a year in which he fought three times.

Welterweight rankings are on the line as Gilbert Burns and Stephen “Wonderboy” Thompson face off in the co-main event at UFC 264.

Ranked No. 2 in the division, Burns is coming off a loss to Kamaru Usman for the UFC welterweight title in February. Prior to the loss, Burns was riding a six-fight win streak, so this weekend he will try to get back on the right track and start a path toward the title once again.

Burns’ opponent is another welterweight contender that is fighting for a chance at the belt: Stephen “Wonderboy” Thompson. Thompson, who is ranked No. 4, comes into the Octagon on a two-fight win streak after beating Geoff Neal and Vicente Luque, both by unanimous decision.

The 38-year-old has already had two shots at the belt in 2016 and 2017 against Tyron Woodley but came up short. Yet Thompson is the only welterweight ranked in the Top 5 that hasn’t gone up against Usman, therefore a victory over Burns could give him an opportunity to fight for the gold. In this karate vs. jiu-jitsu battle, who will come out with their arm raised?

Darkhorse Fight of the Night

Winning a Performance of the Night bonus isn’t unfamiliar territory for welterweight Niko Price. In fact, he’s left with an extra $50,000 in his pocket in four out of his last five wins. Price, nicknamed “The Hybrid”, has only gone to a decision twice in 20 fights, with 10 knockouts and three submissions under his belt. He’ll attempt to jump back into the win category after his last fight with Donald Cerrone, originally a majority draw, was overturned to a no contest. Prior to that fight, Price fell to Vicente Luque via TKO.

Fighting in the opposite corner is Michel Periera, who is seeking his third win in a row. Pereira, who is just as wild in the Octagon as Price, currently has 10 wins by knockout and seven by submission. Price does have three more years of UFC experience than Periera; however, Periera has more professional fights under his belt, coming in with a record of 25-11, 2NC. Price also brings a three-inch reach advantage to the Octagon.

Despite the numbers, these two fighters are expected to bring an epic fight to the Octagon Saturday night and should be strong favorites to win Performance of the Night or Fight of the Night honors.

Looking to improve to 11-0 in his career is featherweight Ilia Topuria, a fighter to keep your eye on during UFC 264. Even though this is only his third fight in the UFC, Topuria has already had two dominant wins. His UFC debut came last October when he stepped in to face Youssef Zalal on short notice. Topuria defeated Zalal via unanimous decision, and eight weeks later, Topuria knocked out Damon Jackson in the first round.

Topuria is eager to make his way into the Top 15 and hopes to do so with a win over Ryan Hall. Hall, the winner of The Ultimate Fighter season 22, last fought in July 2019, when he secured a unanimous decision victory over Darren Elkins. “The Wizard” lost his debut and has won eight straight since. Both fighters are ones to watch out for as they try to make their way to the top of the featherweight division.

After having their fight rescheduled, Trevin Giles and Dricus du Plessis finally get their chance to battle this weekend. The two were supposed to square off in March, but du Plessis had to withdraw, which forced Giles to get a new opponent. Getting new opponents on short notice is something that Giles is familiar with.

Following back-to-back losses, Giles was slated to take on Antonio Arroyo at UFC 247, however, medical issues forced Arroyo from the fight the day before the event. The 28-year-old went on to face James Krause, winning by split decision and he started his win streak once again. Du Plessis, the South African native, will get his second fight in the UFC after knocking out Markus Perez in his debut.

Welcome Back to The Fight Capital of the World!

There’s nothing better on fight night than hearing the roar of a crowd as a fighter makes their way to the Octagon. Is there anything better than hearing it in the Fight Capital of the World? 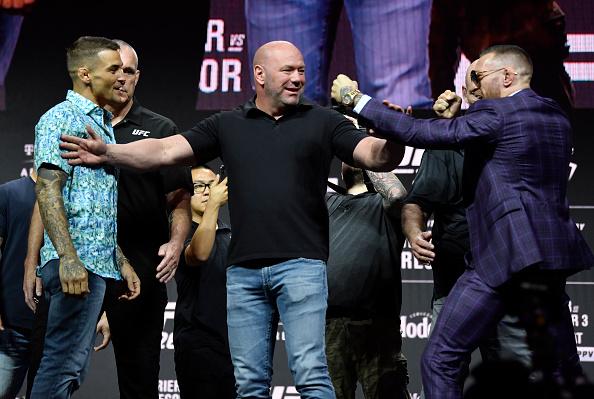 Opponents Dustin Poirier and Conor McGregor of Ireland face off during the UFC 264 press conference at T-Mobile Arena on July 08, 2021 in Las Vegas, Nevada. (Photo by Jeff Bottari/Zuffa LLC)

For the first time since March 2020, a pay-per-view event returns to Las Vegas with an arena packed with fans. UFC 248: Adesanya vs Romero was the last time there was a fight in Vegas with fans - 15,077 to be exact. Of course, there have been fights in Vegas at the APEX, but fans haven’t been allowed in the venue. With a pay-per-view event comes all of the exciting events that lead up to fight night, such as the UFC 264 press conference and ceremonial weigh-ins that fans are able to attend.

It’s been over 480 days since T-Mobile Arena has been filled with the sounds of the UFC faithful cheering on their favorite fighters, and there’s no doubt that they will go wild on Saturday night.

The fans are ready, and the stage is set. Which fighters will come out victorious?