Reasons to watch UFC 215 on Pay Per View

One man on the brink of UFC history; A women’s bantamweight title fight being hailed as the most high-level matchup in division history; A former lightweight champion continues his new road at 170 pounds; A rising prospect; And a featherweight scrap with serious Fight of the Year potential.

UFC 215 is a can’t-miss event on Pay Per View and these are the top five reasons to watch Saturday night.

“GSP and Anderson are great champions, but I’m the best to ever step in this Octagon.” - @MightyMouseUFC#UFC215 pic.twitter.com/cwkkQ2Geq3
— UFC Canada (@UFC_CA) August 31, 2017

There isn’t much that hasn’t already been written about Demetrious Johnson – arguably the greatest mixed martial artist to ever live.

“Mighty Mouse” has an unyielding drive that has allowed him to somehow continue to get better even after all these years and mounted championship title victories.

Now he sets out for the 11th defense of his flyweight title, which would break Anderson Silva’s legendary mark. And if history isn’t enticing enough, the opponent may be his toughest test to date.

Ray Borg has been that heralded prospect everybody is always looking to find in a division dominated the way DJ has done it for over seven years. Borg’s combination of wrestling, jiu-jitsu and an evolving striking game have long had experts prognosticating his rise to thwart the mighty Johnson.

Borg holds the second-best mark for proportion of ground control by a flyweight, better than even Johnson himself. He is an ace on the ground and doesn’t absorb much punishment standing up. He’s going to need every attribute he has to hang with Johnson, but he surely is a formidable foe for the champion. 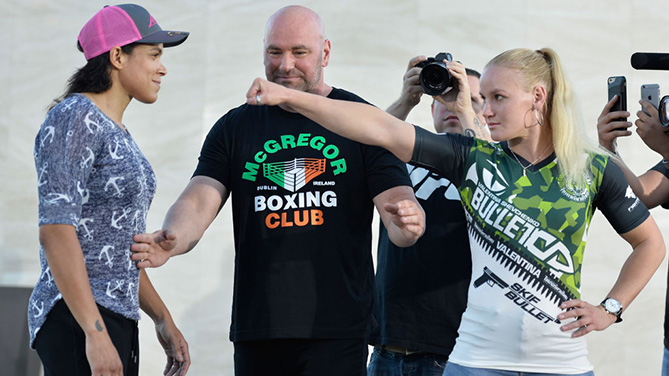 2 – The rematch we’ve been waiting for

It was set to go down at UFC 213, but circumstances forced Amanda Nunes to pull out of her second scheduled title defense against Valentina Shevchenko.

The fight goes down north of the border and these two women have no love lost. Shevchenko believes a champion shows up to fight and voiced her disappointment when Nunes pulled out of their fight with sinus issues in July.

The champion explained that her issues have been resolved and she’s ready to put on another memorable performance. In her last two fights, Nunes has dismantled division legends Miesha Tate and Ronda Rousey. Both fights ended with brutal first-round stoppages and now “The Lioness” looks to further prove her dominance over the division.

But Shevchenko isn’t afraid to stand toe-to-toe with Nunes. The two fought three rounds back in March 2016 and despite Nunes getting the unanimous decision win, Shevchenko picked up steam in the final five minutes. She feels she has the recipe to take out the champion and it’s going to be a fun one to watch.

In his 170-pound debut, former lightweight champion Rafael Dos Anjos looked right at home against Tarec Saffiedine. After losing the title to Eddie Alvarez and then getting dominated by Tony Ferguson, it was time for Dos Anjos to make some changes. At 170, Dos Anjos said he has the energy he was lacking in both those fights.

Up next for the former champ is No. 6-ranked Neil Magny, who has won four of five. This is a high-stakes bout for both guys. RDA almost immediately inserts his name into the list of contenders in the welterweight division with a win. And for Magny, a win over a former champion elevates him in a division where he has proven to be a consistent commodity.

4 – Get to know Tyson Pedro

Tyson Pedro has only made two Octagon appearances, but both have ended with sensational finishes. The Australian karate and jiu-jitsu expert has already cracked the top 15 of the light heavyweight division and is looking to add another name to his impressive resume.

No. 10-ranked Ilir Latifi will be the biggest test to date for Pedro. “The Sledgehammer” has won three of his last four fights.

Gilbert Melendez is making his debut at 145 pounds after a solid run at lightweight in the UFC. He wastes no time in taking on top 10 talent by hooking up with Jeremy Stephens.

Both men employ tenacious and hard-hitting fighting styles. Melendez’s war with Diego Sanchez still holds up as one of the greatest slugfests in UFC history. Stephens has massive power at 145 pounds and can end a fight with one shot.