Reasons to watch UFC 212 Saturday on Pay Per View

The challenge waiting for Max Holloway at UFC 212 is the most ominous test of his impressive career.

Jose Aldo, the greatest featherweight to ever walk the planet, takes on the surging Holloway, who carries with him a 10-fight win streak that has left most of the division in his wake en route to this title opportunity. 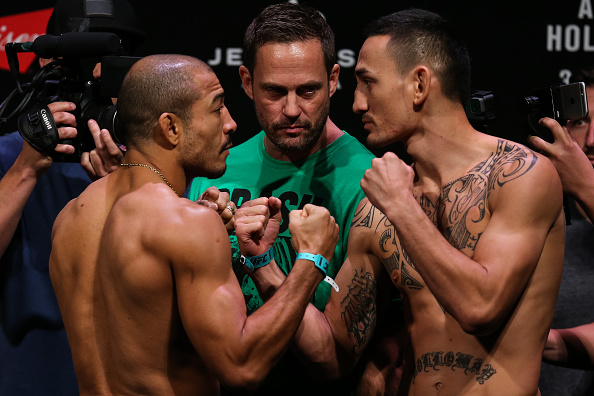 Aldo’s mystique seems to have taken a hit ever since the legend was knocked out in 13 seconds by Conor McGregor at UFC 194. The clip has been played millions of times on social media.

But those 13 seconds can’t taint one of the most prolific careers in mixed martial arts history. Aldo won 15 straight fights, including nine title defenses between his reigns as UFC and WEC champion.

That icon still looms over the entire featherweight division. His destruction of Frankie Edgar for the second time at UFC 200 – an even more complete performance than the first time the two met – reminded everyone that the Aldo of old is present and accounted for.

Jose Aldo vs. Max Holloway is the No. 1 Reason to Watch UFC 212 Saturday night live on Pay-Per-View.

Aldo holds virtually every record in the featherweight history books. He has the most wins (16 – UFC/WEC), knockouts (9), knockdowns (8), and takedown defense rate (71.7 percent).

Historically speaking, when the fight is standing Aldo is near unbeatable. His ability to keep the fight where he wants it keeps his opponents off balance and often forces them into mistakes.

Holloway has some solid stats of his own. He holds the second-highest striking rate in the history of the featherweight division at 5.41 significant strikes per minute. Only McGregor is higher at 5.53.

Two major keys in the fight are striking defense and Aldo’s lethal leg kicks. Holloway lands at a high rate but he also absorbs almost two more significant strikes per minute than Aldo.

If it wasn’t for the baddest woman on the planet, Joanna Jedrzejczyk, Claudia Gadelha and Karolina Kowalkiewicz might be battling for the strawweight title at UFC 212.

Both Gadelha and Kowalkiewicz have tried and failed to take the title from “Joanna Champion,” making the co-main event Saturday night a dire situation for both women who are determined to stay in title contention.

The matchup pits striker (Kowalkiewicz) vs. grappler (Gadelha). But don’t expect either fighter to rely on their comfort zones. Kowalkiewicz has been tirelessly working on her wrestling and Gadelha believes she’s evolving as a striker every day.

The Polish standout bet Gadelha a post fight beer that the Brazilian can’t KO her in Rio. It’s going to be fun to watch and see who wins the bet.

Marlon Moraes has made a lot of noise outside the UFC, putting together a 13-fight win streak that propelled him into his Octagon debut Saturday against Raphael Assuncao.

Moraes isn’t ranked yet in the UFC, but by all accounts he is a Top 5-caliber fighter and has his sights set on the title.

Assuncao is a difficult draw for Moraes in his first UFC bout. The Brazilian has been flirting with a title shot for years and after finally getting healthy, he’s hoping to use the momentum Moraes brings into the UFC to springboard himself to a title shot.

BORRACHINHA!!! @BorrachinhaMMA comes out on FIRE & gets the finish in his UFC debut! #UFCFortaleza pic.twitter.com/TJ0toAJG5l
— UFC (@ufc) March 12, 2017

Brazil’s own Paulo Borrachinha (9-0) made a splash in the UFC in March with a first-round KO win against Garreth McLellan. All nine of Borrachinha’s wins have been first-round finishes and he hopes to continue that trend against Oluwale Bamgbose.

“Holy War Angel” had his big moment when he stopped Daniel Sarafian back in February 2016. Bamgbose has been out of action for over a year rehabbing some nagging injuries but feels he’s emerged as a better fighter. Bamgbose plans to spoil the homecoming for Borrachinha.