Reasons to watch UFC 211 this Saturday

The Octagon is on its way to Dallas for UFC 211 on May 13. After a two-week hiatus, anticipation for the stacked fight card in the Lone Star State is off the charts.

Storylines are everywhere: Two titles are on the line, a rising phenom gets his most significant test yet and future title contenders can state their cases in high-profile matchups.

It was hard to boil it down to just five, but these are the Reasons to Watch UFC 211.

1 – The heavyweights star in Dallas

Rising boxing superstar Anthony Joshua is leading the heavyweight renaissance in his sport as he tries to breathe life into a division that’s been hibernating for a decade.

But in the UFC, the heavyweight division has always been the flagship title of the organization.

Reigning champion Stipe Miocic attempts to tie the record for title defenses (2) against former king Junior Dos Santos. The two met in 2014 in one of the best fights of that year. JDS won a close decision, handing Miocic his only loss of the past five years.

The striking numbers are staggering for both power punchers. Dos Santos’s 12 careers knockdowns are most in UFC heavyweight history. Miocic holds the third-highest striking rate (5.03 significant strikes per minute) in the division’s history. JDS landed the most significant strikes (157 vs. Ben Rothwell) in a single fight in heavyweight history, while Miocic holds the mark for the greatest number of total strikes (361 vs. Mark Hunt) in a single heavyweight fight.

Since Joanna Jedrzejczyk arrived on the scene she’s been demolishing all contenders in her path. She’s posted a perfect 7-0 record in the UFC, running through the best the strawweight division has to offer.

Whenever a new contender emerges, Jedrzejczyk has unequivocally shut the door on that fighter’s title dreams.

Enter Jessica Andrade and her size and power. The Brazilian moved down to 115 pounds after an over-.500 run at bantamweight in the UFC.

Since changing weight classes, Andrade has gone 3-0 and has established herself as the newest contender that seems to have people thinking a title change is possible. But Jedrzejczyk has heard the echoes before and has answered the bell every time.

There are three fights on the card that feature fighters poised to reach No. 1 contender status in their respective weight classes with a big win in Dallas.

Demian Maia has been grinding at 170 pounds, taking out top 10 fighters regularly since moving down a weight class. If he beats Jorge Masvidal, he all but ensures his next fight will be for the title. “Gamebred” takes all Maia’s momentum with a big win and adds to an already impressive three-fight win streak.

Henry Cejudo is riding a two-fight losing streak and is just one fight removed from his disappointing title loss against No. 1 pound-for-pound fighter Demetrious Johnson. But against surging Sergio Pettis (No. 6 flyweight), “The Messenger” can jump right back into the title picture. For the younger Pettis, this is his first big-time high profile fight and a win could place him in the No. 1 contender role to Johnson’s title.

And finally, Dustin Poirier has been one of the hottest fighters at 155 pounds since moving up a weight class in 2015. If he takes out No. 3-ranked and former champion Eddie Alvarez, he jumps to the front of the line of contenders.

Since winning The Ultimate Fighter: Latin America in 2014, Yair Rodriguez has been putting together his own personal highlight reel as he’s ascended the featherweight rankings. The 24-year-old super prospect is 6-0 in the UFC and is currently ranked as the seventh-best 145-pound fighter in the organization.

Get ready for UFC 211: Fight card | Camp updates: American Top Team, Strong Style | Andrade has become best version of self as strawweight | Watch: Free fight: Dos Santos vs Miocic 1 | Inside the numbers for the main event | UFC 211 extended preview | Do not miss out! Order the PPV now

But as impressive as Rodriguez has been, the first true test of where he stands among the elite of the division comes against former lightweight champion and UFC legend Frankie Edgar. “The Answer” hopes to use the young star to build his case for another crack at the title. 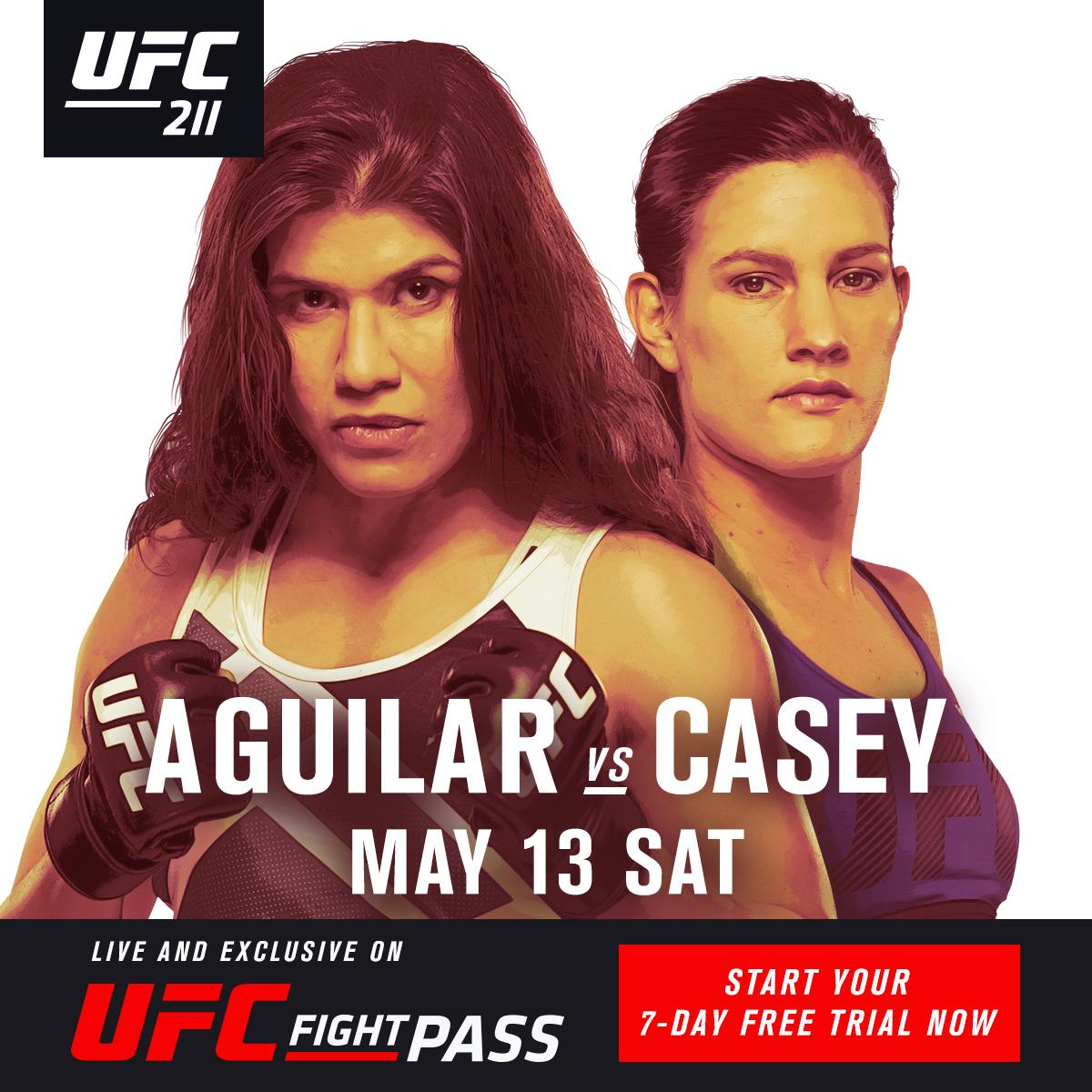 There was a considerable amount of hype surrounding Jessica Aguilar when she signed with the UFC in 2015. But after a loss to Claudia Gadelha and almost two years sidelined because of injuries, the strawweight standout is looking to make her first big splash in the UFC.

Aguilar faces Cortney Casey, who has compiled a 2-3 record in the UFC. She holds a win over Randa Markos and has her back against the wall hoping to avoid a losing streak.