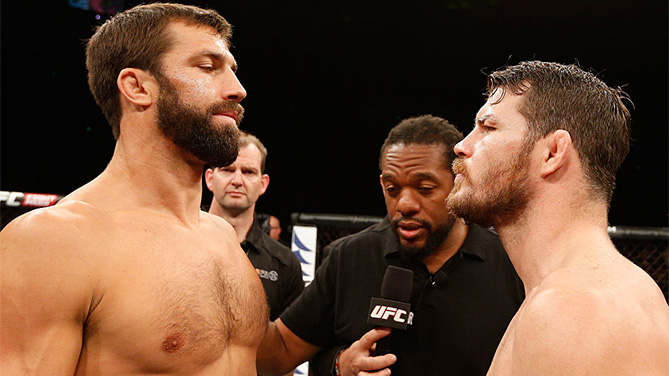 The UFC 199 main event went from one heated rivalry to the next when Michael Bisping replaced injured Chris Weidman to face Luke Rockhold at the The Fabulous Forum in Inglewood, Calif. on June 4.

It’s no secret that Rockhold and Bisping despise each other – that’s nothing new. But what is a changeup for this new main event is the storyline.

Weidman was just a +145 underdog to Rockhold in his quest to reclaim his lost title. But Bisping stands as an astounding +650 dog to take Rockhold’s strap. A $1,000 bet on Rockhold will yield just a $100 payout.

Vegas is giving Bisping virtually no chance to beat Rockhold in the title fight the Brit has been chasing for almost 10 years. But the Cinderella story may not be as impossible as the odds suggest.

Bisping is coming off a win over Anderson Silva – the man who many consider to be the greatest of all time. “The Count’s” confidence is soaring and he’s faced Rockhold once before. He knows what to expect and the mistakes he made last time out.

On the other hand, Rockhold is one of the most dominant fighters in the UFC today. He possesses a combination of strength, power, accuracy, patience, and multiple offensive layers which make him one of the pound-for-pound best fighters.

However it plays out, the possibilities of this improbable title fight make it the No. 1 reason to watch UFC 199 on Pay-Per-View.

In what could certainly serve as its own standalone main event, No. 4-ranked pound-for-pound fighter Dominick Cruz defends his bantamweight title against longtime nemesis Urijah Faber in a grudge match five years in the making.

Cruz is coming off perhaps his most gratifying victory: a unanimous decision over former champion TJ Dillashaw and former friend and training partner of Faber. The triangle became complete when Faber was awarded his fourth UFC title shot in lieu of a Cruz-Dillashaw rematch.

But Cruz and Faber have unfinished business. The two rivals were set for their third meeting at the conclusion of The Ultimate Fighter season 15, but Cruz suffered an injury and the fight was off.

Faber is the only man to ever beat Cruz, who already will go down as the best 135-pound fighter of all time. “The California Kid” has a legacy of his own and it would be completed with a title win over his No. 1 foe.

Also on the main card, featherweight contender Max Holloway takes on No. 5-ranked Ricardo Lamas in a title eliminator. With Jose Aldo and Frankie Edgar set to meet for the interim title at UFC 200, the winner of Holloway-Lamas positions himself for the next crack at the championship.

Holloway is on one of the all-time great winning streaks in the history of the featherweight division. The Hawaiian has won eight in a row against the who’s who of the division. His last loss came against current featherweight king Conor McGregor almost three years ago.

Lamas gets a high-profile fight against Holloway after an impressive win versus Diego Sanchez last time out. “The Bully” has won seven of his last nine and a win over a touted Holloway will raise his stock immensely.

Staying put in the featherweight division, No. 12-ranked Brian Ortega is looking to continue his rise against division veteran Clay Guida in the FS1 prelims main event.

Ortega has been ablaze in the UFC since the beginning of 2015, winning both of his fights in impressive fashion. The Brazilian jiu-jitsu wizard has a well-rounded game with an evolving standup arsenal that makes his a name to watch in a division crawling with contenders.

“The Carpenter” has alternated wins and losses in his last six outings. He’s coming off a loss to Thiago Tavares and has been finished in his last three losses. But the savvy wrestler has the potential to throw a wrench into the title contender dreams of Ortega, making this a much-watch main event.

Back in 2014 it was Sean Strickland who was the talk of the town in the rising welterweight ranks. He won his first two in the Octagon and seemed poised to crack the top 15 with his perfect record continuing to grow.

But Strickland ran into a road block that halted the hype train, but he’s responded, winning his last two to bring a 17-1 mark into UFC 199. He faces undefeated Tom Breese (10-0), who’s the new “next big thing.”

Breese struggled in his last outing, but the British sensation still pulled off the win and continues to be a rising star on the welterweight circuit.

Now these two fighters meet in the main event of the UFC FIGHT PASS prelims in a prime spot to put up a memorable performance. The man who takes advantage of the opportunity could be on the fast track to the top 15 of the rankings.