The legends of MMA are present and accounted for at UFC 198 on Pay-Per-View. They all carry the Brazilian flag to the Octagon to perform in front of their country at the Arena da Baixada in Curitiba, Brazil.

The matchup is as good as Silva vs. Hall and the championship is on the line in historically the biggest division in the UFC.

After wins over Velasquez, Minotauro Nogueira, Fedor Emelianko, and Mark Hunt, Werdum has made his case for best heavyweight in the history of mixed martial arts. But like in all sports, the next crop of rising talent is always chomping at the bit to get a crack at the top guy.

Miocic is a dangerous striker, who showcased how quick he can turn the lights off on his opponent when he KO’d Andrei Arlovski in less than a minute earlier this year.

In his current UFC run, Werdum has showed his improved striking. He went toe-to-toe with Hunt and Velasquez on the feet after many wondered if he could hang with two of the top strikers in the division. Expect a classic when these two hungry heavyweights step in the Octagon for 25 minutes on Saturday night.

In possibly the most anticipated fight of the night, Cris Cyborg (15-1, 1 NC) makes her long-awaited UFC debut against Leslie Smith (8-6-1). Widely considered the best pound-for-pound women’s fighter on the planet, Cyborg is one of the most destructive forces in the history of MMA.

Cyborg has put together nine straight KO victories and has finished 13 of her 15 career wins by KO. She’ll take on Smith in her hometown of Curitiba and hopes to make an impact in her debut inside the Octagon.

In the co-main event, No. 2-ranked middleweight Jacare Souza (22-4) faces No. 3-ranked Belfort (25-11) in what could be a title eliminator bout. Souza is coming off his first loss in five years against Yoel Romero, while Belfort is riding some momentum after a KO win against Dan Henderson. 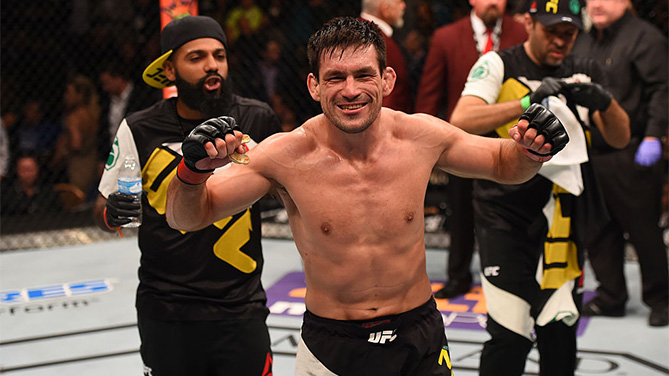 But the main attraction is Matt Brown (22-13) vs. Demian Maia (22-6) in a huge welterweight fight on the FS1 prelims main event.

Brown has won eight of his last 10 and is hoping to get back into the mix of the Top 5 in the division with a win over Maia, who has won four in a row at 170 pounds.

Maia, the former middleweight title challenger, is starving for a title shot and a win over Brown will do nothing but improve his odds at getting a crack at the champion. 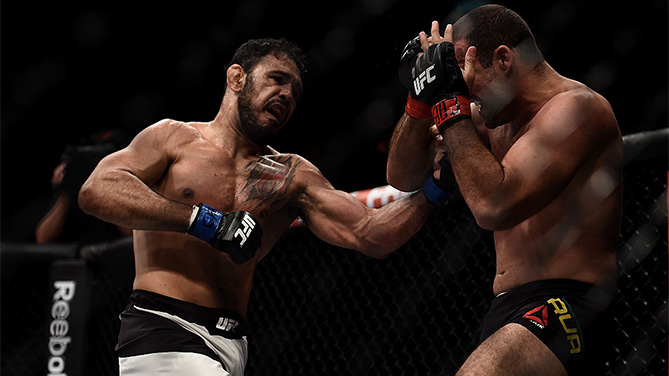 Both guys desperately need a win in this one to keep pace in the Top 10 of the 205-pound division. Nogueira has lost two in a row and Cummins dropped his last fight to Glover Teixeira.

Look for this to be an interesting style matchup. Cummins in an elite wrestler, but the ground is Nogueira’s world.