Four hundred twenty days removed from his grand UFC arrival – a Fight of the Night win against Charles Rosa at UFC 188 in his home country of Mexico – Yair Rodriguez headlines his own Fight Night on Saturday in Salt Lake City.

Rodriguez won the inaugural season of The Ultimate Fighter: Latin America, but he announced that he was a name to watch with a series of sensational flying kicks at UFC 188. “El Pantera’s” exciting style and well-rounded arsenal have garnered him attention as one of the brightest rising stars in all of mixed martial arts.

After just four UFC appearances – four wins, good enough for the third-longest active streak in the featherweight division – he has moved all the way to the No. 13 ranking at 145 pounds.

Next for Rodriguez is veteran Alex Caceres, who has won his last two since returning to featherweight following an unsuccessful move down to 135 pounds. “Bruce Leeroy” will try to match Rodriguez’s flair in the striking exchanges with his own set of exciting kicks and punches.

Caceres holds the highest striking accuracy in UFC/WEC bantamweight history (50.9 percent) and his ground skills have produced the third-most submission attempts in the division, along with a total of five wins by submission.

Rodriguez vs. Caceres is the No. 1 reason to watch Fight Night Salt Lake City. 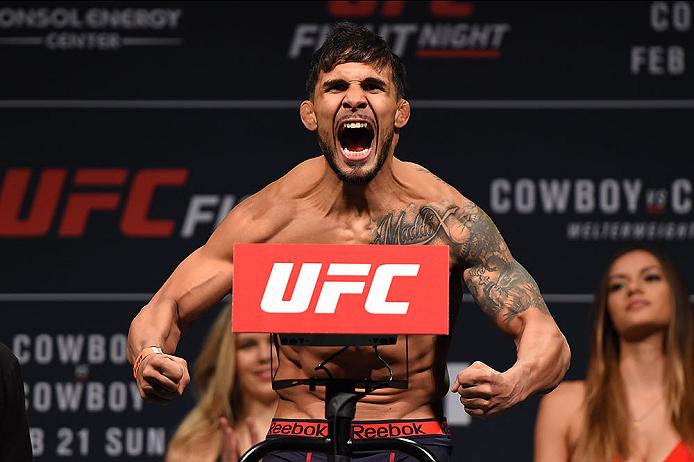 Dennis Bermudez of the United States steps on the scale during the UFC Fight Night weigh-in at Stage AE. (Photo by Jeff Bottari/Zuffa LLC)" align="center" />2. Dennis the Menace looks to start a new streak

After putting together an ultra-impressive seven fight win streak in the featherweight division – putting him on the cusp of contention – Dennis Bermudez suffered back-to-back losses against Ricardo Lamas and Jeremy Stephens.

“The Menace” rebounded with a win over Tatsuya Kawajiri and now looks to return to his winning ways in the co-main event against Rony Jason.

Jason has been out of action for over a year while serving a suspension, but the Brazilian jiu-jitsu ace is sure to be an adequate test for Bermudez. 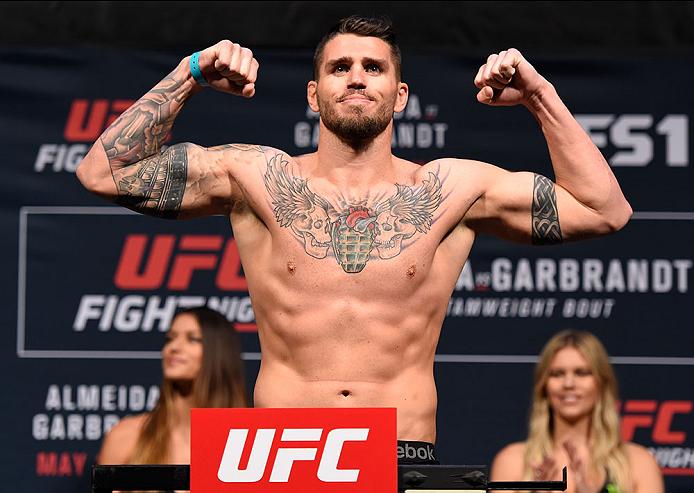 Chris Camozzi steps on the scale during the UFC Fight Night weigh-in at the Mandalay Bay Events Center. (Photo by Josh Hedges/Zuffa LLC)" align="center" />3. Camozzi making most of second chance

There may not be a more inspiring story playing out in the middleweight division than Chris Camozzi’s rejuvenated career.

Camozzi was cut from the UFC late in 2014, likely never to return to its ranks, but was given a second chance when he was the only man willing to fight Ronaldo “Jacare” Souza on short notice in April 2015. He lost that fight but ever since Camozzi has been ablaze, winning three in a row and now knocking on the door of the Top 15 in the division with a matchup against No. 12 Thales Leites.

Brazil’s Leites has had his own run of bad luck, dropping two in a row and now finds himself desperate for a win. 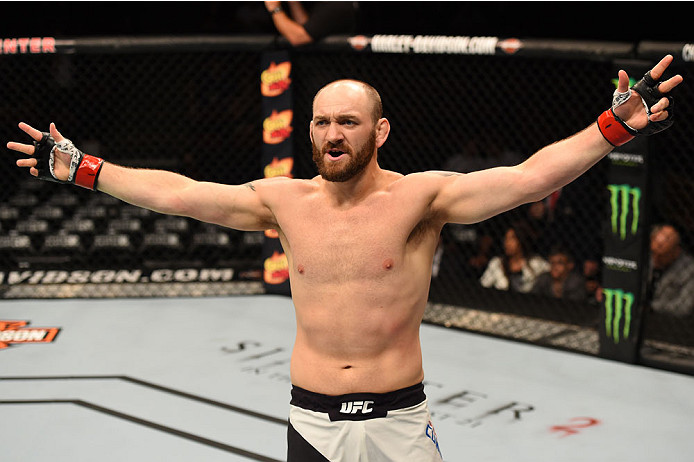 Zak Cummings reacts after his TKO victory over Dominique Steele in their welterweight bout during the UFC event at the United Center. (Photo by Jeff Bottari/Zuffa LLC)" align="center" />4. Prospect killer Cummings thirsty for more

Zak Cummings has looked outstanding in his last two fights, taking out Nicolas Dalby and Dominique Steele in convincing fashion. The Las Vegas product has won four of his last five and is climbing the charts in the welterweight division.

Next up is Santiago Ponzinibbio, who has also won four of five and his two-fight win streak is a pair of first-round knockouts.

No. 5-ranked Cub Swanson takes on No. 14-ranked Tatsuya Kawajiri in the main event of the UFC FIGHT PASS prelims in an awesome featherweight scrap.

Swanson has refocused after a pair of losses to Frankie Edgar and Max Holloway. Two of the toughest 145 pounders on the planet were able to submit Swanson, but he isn’t defeated. He bounced back last time out and won a decision against Hacran Dias.

Kawajiri, a PRIDE and Strikeforce veteran, makes his sixth UFC appearance. He’s won three of five and is looking to maintain his ranking in the Top 15 of the featherweight division.