When this Sunday night rolls around, it will only have been 16 days since the last UFC event, but coming off such an amazing avalanche of fight cards in late 2017, it already feels like an eternity. This special Sunday night presentation will not only mark the first UFC event of the new year, but also the UFC's inaugural visit to Saint Louis. And what a debut it's shaping up to be.

These are the reasons to watch Fight Night Saint Louis: Stephens vs Choi 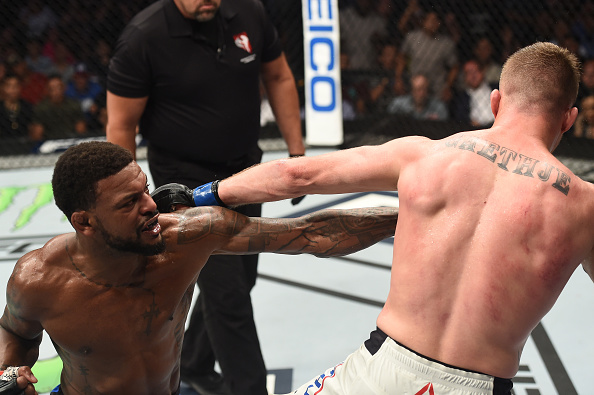 Sure, Michael Johnson ended up on the wrong side of the ledger in his 'Fight of the Year' against Justin Gaethje, but anyone who saw that fight (and you should go watch it right now if you haven't) knows that what made that contest special was the second-to-second exhilaration in the feeling that the fight could go either way at any moment. It was one of those special moments in MMA history that was immediately seared into everyone's memory.

For his debut at featherweight, Johnson will bring that same destructive power and abandon. He'll need it. His opponent, No. 10 Darren Elkins, is riding a five fight winning streak, and has shown that he has the chin and the cardio to outlast the kind of beating Johnson can dish out.

Johnson is fighting in front of his hometown crowd and the motivation will be high for "The Menace" to bring some fireworks on Sunday.

You leave us no Choi

It’s not often that the UFC Free Fight that promotes a fighter’s upcoming bout highlights a loss by that fighter, but it’s a testament to the technique and excitement delivered by Dooho “The Korean Superboy” Choi that even his (rare) losses will having audiences wanting more. It's preceisely because of this phenomenon that you'll want to watch him fight now.

Like his fellow countryman “The Korean Zombie” Chang Sung Jung, Choi will fulfill the obligation of all male citizens of South Korea by serving two years of mandatory military service, beginning in roughly a year from now. It's a bit of a tease for fight fans who have already been spoiled by his prowess and will have to say goodbye for a spell. He's aiming for a title shot before he takes his hiatus, and given that he only has 12 months to accomplish that, he really has his work cut out for him. The easiest task on that path is not likely his next opponent, Jeremy Stephens, an unrestrained fighter with aspirations of his own. Don't miss out on what has the potential to be one of the wildest one-year rides of any UFC fighter's career.

It has been more than a year since we saw Paige VanZant in the Octagon, and it's not because she hasn't wanted to fight.

Thrilled to be moving up to 125lbs after a much-publicized battle with weight-cutting, her initial debut at flyweight against Jessica Eye was stymied by a back injury. And that wasn't all. PVZ also counted sinus infections, pink eye, ringworm and a herniated disc among her opponents, all of which were victorious in keeping her out of action.

Finally healthy in body and spirit, she's set to make her long awaited entry into the division against Australia's Jessica-Rose Clark. It won't be the warmest welcome. Clark already has a convincing division win over compatriot Bec Rawlings, and is looking to climb past her current #10 ranking.

Incidentally, VanZant's original debut opponent, Jessica Eye, is fighting on the same card against Kalindra Faria, and regardless of the results Sunday night, a re-booking of the VanZant-Eye fight feels inevitable.

There are plenty of 40 year old fighters still in the game, but none that fought in (let alone won in) UFC 12. True, Vitor Belfort was the youngest fighter to score an Octagon win way back in 1997, but it's safe to say 'The Phenom' has already forgotten more fights in his storied career than most of today's stars will ever undertake. Dan Henderson, Luke Rockhold, Michael Bisping and Anthony Johnson are just a few of the many behemoths Belfort has dispatched on his way to legend status, and his convincing unanimous decision win over Nate Marquardt back in June showed he still had the goods.

It won't be a cake walk in St. Louis. His co-main opponent is a resurgent Uriah Hall, himself coming off an impressive TKO win over Krzysztof Jotko that was an embodiment of power and heart. But the middleweight matchup is an intriguing interplay of distinct skill sets. Further, the chance to witness a fighter of Belfort's stature competing at such a high level more than 20 years removed from his debut is not only special, it's a gift.

Remember the name The Nigerian nightmare @usman84kg is the best welterweight on the planet today no mercy @ufc pic.twitter.com/Dwl4jAhtVX
— Ali Abdelaziz (@AliAbdelaziz00) January 6, 2018

Named by EA Sports as one of four fighters to watch in 2018, Kamaru Usman's stock has continued to climb since his blistering KO of Sergio Moraes back in September. Usman's lone professional loss predated his UFC career in 2013, and since arriving in the promotion, he's walked through any opponent put in front of him, and is easily one of the most exciting and upwardly mobile welterweights in the division.

Promising to give #3 Colby Covington "the spanking your father failed to do", Usman will first have to cross paths with viking Emil 'Valhalla' Meek, who makes his second Octagon appearance following his 2016 defeat of Jordan Mein.

A win over Meek would increase his win streak to 11 and almost certainly catapult him higher than his current #10 ranking in the division. Usman himself has suggested that the only reason he hasn't fought top contenders like Covington already is because they are “smart enough to know that they have no chance.”

If he dominates again Sunday night and doesn't fight a ranked opponent next, his point would be hard to argue.