While Rafael Dos Anjos was winning and defending the UFC lightweight title, Tony Ferguson was in the background becoming arguably the best 155-pounder on the roster without gold around his waist.

Wherever the fight goes, Ferguson (22-3) is as good as they come. The Ultimate Fighter Season 13 winner is a former Michigan All-State high school wrestler, a Brazilian jiu-jitsu purple belt and has the eighth-highest striking rate (4.52 significant strikes per minute) in UFC lightweight history.

The journey of every great UFC standout eventually leads to a pivotal matchup that can determine the championship hopes and dreams of that fighter. That challenge comes this Saturday night for Ferguson when he takes on Dos Anjos (25-8), arguably one of the greatest lightweight champions in UFC history.

Dos Anjos’ 14 career wins in the UFC are good for fourth on the all-time list in the lightweight division. He’s logged 3 hours, 45 minutes, 41 seconds of fight time inside the Octagon, which ranks fifth in lightweight history. In his championship win against Anthony Pettis at UFC 185, RDA landed an amazing 90 significant strikes. His 692 significant strikes landed over the course of his career is the seventh-best mark in the division’s history.

The most intriguing part of this fight is that every aspect of the bout is going to be a chess match. Both fighters love to push forward and throw big bombs, and if the fight goes to the mat it will be RDA’s classic black belt jiu-jitsu against Ferguson’s unorthodox ground game.

In a main event with enormous title implications, No. 2-ranked lightweight Rafael Dos Anjos vs. No. 3-ranked Tony Ferguson is the No. 1 reason to watch Fight Night Mexico.

More on UFC Fight Night Mexico City: Fight card | WATCH: Dos Anjos on the road back to the title | Ferguson going back to basics | Numbers tell the story for main event

2 – The Nightmare returns in Mexico

It’s been an up-and-down ride for Diego Sanchez the past few years. The first-ever Ultimate Fighter winner hasn’t had a win streak since 2011 and has gone win-loss in his last eight fights.

Sanchez (28-9) dropped to featherweight hoping to remedy things in his game, but a decision loss to Ricardo Lamas forced him back to lightweight, where he has gone 1-1 against Jim Miller and Joe Lauzon.

Next up for Sanchez is Marcin Held (22-4) in the co-main event Saturday. The Polish lightweight is making his UFC debut and brings a 22-4 record with him into the Octagon and has fought the who’s who of lightweights outside of the UFC.

No. 8-ranked Charles Oliveira went at it with former lightweight champ Anthony Pettis in August, showing his toughness and hunger to remain in contention in the featherweight division. The top of the division is tough sledding, so Oliveira (21-6, 1 NC) is taking his matchup with No. 4-ranked Ricardo Lamas seriously.

Lamas (16-5) lost against Max Holloway last time out by decision, but “The Bully” has been a perennial contender in the division. A win over Oliveira betters his stock as the top of the division takes shape with a few big names circling and waiting for the eventual championship title picture to clear up. 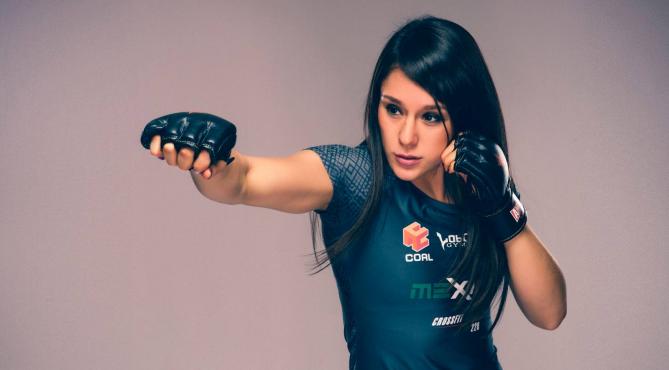 UFC president Dana White has been impressed with Alexa Grasso for a long time. The former Invicta FC standout went 4-0 in that organization before finally signing her UFC contract. She’s competed at atomweight and strawweight and will jump right into the deep end of the pool in Mexico City with a matchup against Heather Jo Clark.

Clark (7-5) is a UFC veteran now after just two official fights and a run during Season 20 of The Ultimate Fighter. The strawweight division is still young and the experience some have gained in the early days has been beneficial.

Grasso (8-0) is known for her striking, winning four of her eight career wins by knockout. She also has a wealth of jiu-jitsu experience should the fight hit the mat, but her aggressive style and power usually means the fight is going to involve some striking.