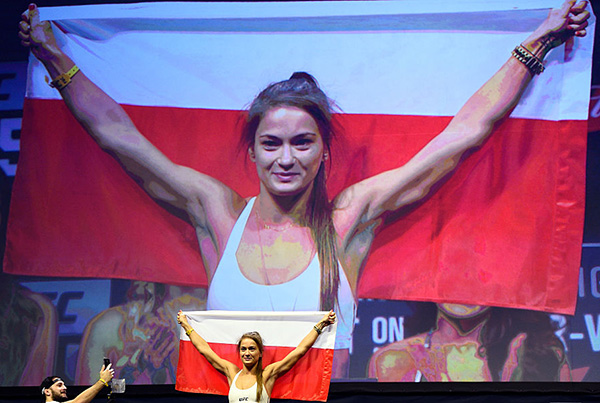 This Saturday, Oct. 21, the UFC makes its second appearance in Poland, and its first since 2015. Like other UFC FIGHT PASS exclusives of late, this card is chocked full compelling matchups and ranked fighters ready to catapult to the next level.
Here are the reasons to watch Fight Night Gdansk.

Despite the impressive reign of women’s champ Joanna Jędrzejczyk, it often gets overlooked that Poland is an absolute cornucopia of MMA talent, much of which will be on display this Saturday.

Gunning hard for Jędrzejczyk’s belt is fellow compatriot Karolina Kowalkiewicz. Kowalkiewicz’s perfect MMA record was brought to a halt by Joanna at UFC 205, and she suffered an aftershock at the hands of Cláudia Gadelha at UFC 212. Despite this stumble, a rejuvenated Kowalkiewicz remains ranked No. 3 among strawweights, and a win against newcomer Jodie Esquibel keeps her in the running for another shot at the top.

When an initial headlining bout for Gdansk fell through, welterweight stud Donald Cerrone made it clear he'd be more than happy to step into the spotlight. This will be his third fight of 2017, but he's hoping that unlike the first two, this one ends in a win. It's the first time in his professional career that he’s suffered back to back losses, and it’s evident to anyone who has been around him that he’s got no intention of letting the streak get to three. At 32-9-0, he’s ranked No. 6 among welterweights, and is determined to get back in the conversation for a shot at Woodley. Finishing the ascending newcomer Darren Till would go a long way in making that happen.

The addition of fan-favorite “Smilin’” Sam Alvey to any card is always a good sign, and his super short notice (10 days) acceptance of a bout against dangerous Russian Ramazan Emeev is no exception. What’s even more notable this time around is that this will be Alvey’s eighth fight in only 16 months, making him not only one of the most prolific active fighters on the roster, but a mere stone’s throw from the record number of fights in a calendar year if he fights again soon. With his well-know “say yes” mentality when the phone rings, anything could happen and usually does in the UFC.

If there’s an attribute that UK fighters seem to have in spades, it’s confidence. Look no further than champions Michael Bisping and Conor McGregor. Love them or hate them, when they speak, people listen, and more importantly, they line up to watch. And like Bisping and McGregor, Liverpool native Darren Till has the Octagon skills to back up the trash talk.

Although undefeated in the UFC, nobody, Till included, expected a headlining appearance this soon in his ascension, let alone one against such an experienced and dangerous veteran like Donald Cerrone. But while Till is careful to acknowledge Cerrone’s contribution to the sport, a gap in their age and expertise doesn’t seem to concern him in the slightest. In fact, he’s raised more than a few eyebrows by predicting that he’ll “run through” and “smash” Cerrone. If his bold prediction comes to pass, it will be hard to deny we’re not watching another star in the making.