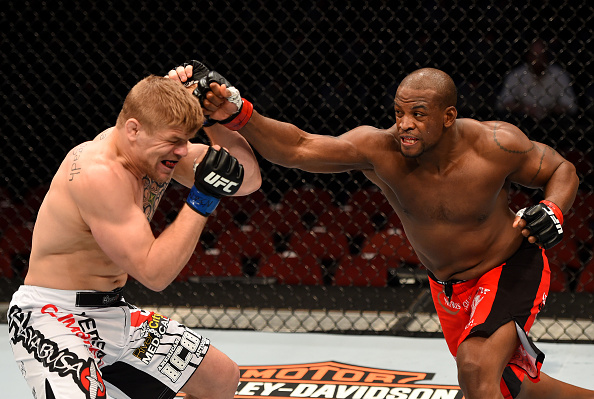 Winning is a beautiful thing. It can also cloud a fighter’s judgment, making him ignore things that otherwise couldn’t be ignored. Even a loss like the one Eddie Gordon suffered against Josh Samman could be washed away with the simple sentence “I just got caught.”

But after Gordon lost a close split decision to Chris Dempsey in April, the Ultimate Fighter 19 winner’s second consecutive defeat, it was time to make some hard choices, and to his credit, he did.

“That fight was a huge learning lesson,” Gordon said. “I made it a lot harder than it should have been. And I had bad habits. I got used to blowing up to 230, 235 in between fights, and then losing 40-50 pounds just to get to my weight class was not healthy and was just stupid. That loss put things into perspective for me, and I took (UFC President) Dana White’s advice that he said on the show – ‘if this kid gets in shape and stays in shape, he’s going to be a tough problem to handle’ – and that’s what I did. I got a nutritionist, we’ve been working since the day after that fight and my weight’s been phenomenal. It’s not even a concern anymore, so that’s going to be huge and I think it’s gonna show in this fight. I’m excited for everybody to see the real me.”

If there’s a typo in this story, it’s not about the weight Gordon would get up to between fights or the amount of weight he would have to cut to make the 186-pound weight limit for non-title UFC fights. So you read correctly – every few months, Gordon would sign a fight contract and look at dropping 40 to 50 pounds just to be able to fight. That’s not including fight strategy, techniques, or anything else related to his opponent. That’s just weight loss.

“It’s nuts,” he admits. “I’m a very mentally tough guy, and for the last four years, I’ve been cutting 20 pounds the night before weigh-ins, and it’s not the smartest thing to do, but I put my mind to it and said ‘I could do anything.’ It worked out most of the time, and even the fights I won, I wasn’t the same guy that’s training in the gym, and Ray Longo said it best after that fight. He said ‘it’s not about making weight; it’s about performing at that weight. We need to see the same guy that’s sparring with the champion in the Octagon.’”

That champion, middleweight boss Chris Weidman, also took Gordon to the side and let him know that what he was doing between fights wasn’t going to cut it if he wanted to make the UFC his home for the rest of his fighting career.

“I’m fortunate to have a great support system around that won’t tell you what you want to hear, but they’ll tell you what you need to hear,” Gordon said. “We truly care about each other, and we sugarcoat anything. Chris said ‘you need to get your weight under control. There’s no reason you should be cutting that much weight the night before. Just because you can do it, that doesn’t mean that you should.’”

So in addition to the Serra-Longo team, Gordon brought in nutritionist Lou Giordano, and while “Truck” was always a nice guy before; he’s even more peaceful heading into this Saturday bout against fellow TUF winner Antonio Carlos Junior.

“I made a complete 180 change in my entire mixed martial arts thinking and way of life, and this fight, to me, is everything,” he said. “It’s great marketing for the UFC with two TUF winners, but for me, this is redemption. I’m ready to get back on the path in a big fashion against a really good guy, and a well-known guy too. For me, this is very, very exciting, and I love the matchup.”

The 31-year-old Gordon is even looking forward to fight week, something you never would have heard from him in the past.

“I’m looking forward to weighing in and being energetic and being me,” he said. “I’m a happy go lucky guy and I was miserable. (Laughs) My family didn’t want to talk to me, the week of the fight I’d separate myself from my girlfriend and the kids because I was on edge 24/7, and it drove me crazy. Fight week was hell week for me. I used to dread it because I knew I had to cut weight, go do a lot of media stuff and I didn’t look forward to the week of the fight.”

Admitting that making weight three times during his six weeks on The Ultimate Fighter gave him “a false sense of security,” Gordon hit the wall cardio wise against Dempsey. It was a back-and-forth battle that could have gone either way, but Gordon is adamant that the only way he saw it going was his way.

“I watched the Dempsey fight 13 times,” he said. “It drove me nuts. In my eyes, I thought one and two went easily for me, and even the third, I felt like I had that, but he got a takedown with 14 seconds left. I wanted to watch it with an unbiased eye, and I said this is not the same me that’s in the gym. That was a tough pill for me to swallow. Watching that fight with all my coaches, and especially Ray and Matt (Serra), they tell it like it is, and we believe, deep down in our heart, that I won that fight. I thought that was an easy decision to make, but I’m a true believer that everything happens for a reason. It’s not Chris Dempsey’s fault that the judges didn’t see it in my favor, so it is what it is. He went out and did what he had to do.”

“I watched it until it was out of my system,” Gordon laughs. “I got tired of watching it at 10.”

When it was over, Gordon didn’t just make changes in his routine, he reached out to someone else who used to battle the scales on a regular basis, but eventually found his optimum weight class and the success that goes along with feeling good on fight night.

“He was the biggest example,” Gordon said. “The guy used to torture himself to get to 170 and he goes up two weight classes and is contending for the belt. He’s a completely different fighter. And Dustin Poirier is the most recent guy. He used to cut down to 145; now he’s fighting at ‘55 and he’s looked the best he’s ever been. I think we put too much emphasis on being big and being huge when we’re not fighting, but realistically we all have to step on the scale at the same time and weight, so there is no true advantage.”

It’s part of the MMA education of Eddie Gordon, who we often forget has only 11 pro fights. To his credit, he’s aware of his predicament and making sure he asks a lot of questions and soaks in every bit of knowledge he can.

“It’s learning on the job,” he admits. “I’m fortunate enough to be in the big show and to be able to learn at the highest level, and I’m a baby when it comes to this sport. I’ve only been fighting for five years, so I’m fortunate enough to be in the position where I am and I’ve got to make sure I take advantage of it. But I’m learning from everybody.”

And on Saturday, he gets a fresh start.

“I’m looking at this as my UFC debut, and I’m excited.”