Getting To The UFC Is A Dream Come True For Caio Borralho, But UFC Fight Night: Luque vs Muhammad 2 Isn't His Final Destination.
By Gavin Porter, On Twitter @ItsGavinPorter • Apr. 14, 2022

Reaching the UFC is a dream shared by many mixed martial artists around the world, but achieved by only a select few. That journey looks different for each athlete. For Brazilian middleweight Caio Borralho, it took a 10-fight unbeaten streak and two wins on Dana White’s Contender Series to make it to the big show.

Borralho allowed himself to soak in that moment of realization inside the Octagon that Tuesday night back in 2021. He finally was living his dream after training for the last eight years with Demian Maia and admiring the likes of Conor McGregor and Darren Till.

But reaching the UFC is only the first of the career dreams that Borralho is focused on achieving. It was the first step, and while it’s great that he’s made it, his main goal is to become a UFC champion.

MORE FIGHT NIGHT: Fighters On The Rise | Rise of Luque | Fight By Fight Preview | Vicente Luque Fighting On Pure Instinct | Belal Muhammad Is Only Here To Be Champion

“My goal is to be a world champion; that was always the goal. Since I left my home, I said to my Mom, ‘I will be a world champion and I will be a UFC fighter.’ So, the first dream was to be a UFC fighter and I’m here,” Borralho told UFC.com. “Now I need to get my way to the top step-by-step. It’s just my debut right now, but I want to go step-by-step to the world title, for sure.”

“The Natural” makes his debut against fellow debutant and DWCS alum Gadzhi Omargadzhiev at UFC Fight Night: Luque vs Muhammad 2. It will be Borralho’s third time competing in the UFC APEX, so he’s anticipating that it’ll feel like home when he makes the walk on Saturday.

“I don’t feel like I’m really debuting. I have fought two times in this same Octagon. I’m used to the cameras and used to people seeing me and with Dana White sitting next to the Octagon,” Borralho said. “It’s two debuts. In the debut, you always want to impress the boss. That’s what makes this fight interesting. Besides that, he’s undefeated and I have one defeat back in 2015, so it’s been years since I lost, and he’s never lost. All together it makes a great fight for the fans. 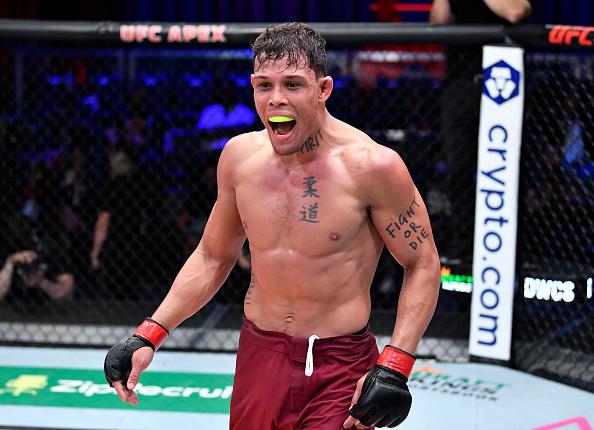 Borralho thinks that Omargadzhiev will rely on his wrestling background and use his strikes to set up his grappling. He’s confident that he’ll be able to negate that using the training he’s put in with a legendary grappler like Maia. Combining that grappling experience with his submission game will hopefully show that he’s better than Omargadzhiev at his own game.

Borralho also knows he can frustrate Omargadzhiev by keeping his distance and beating him in the body-to-body standup game, but if he sees an opening on the ground, he’s going to take it.

“If he leaves that neck open,” Borralho laughs, “I’m going to squeeze that neck, for sure.” 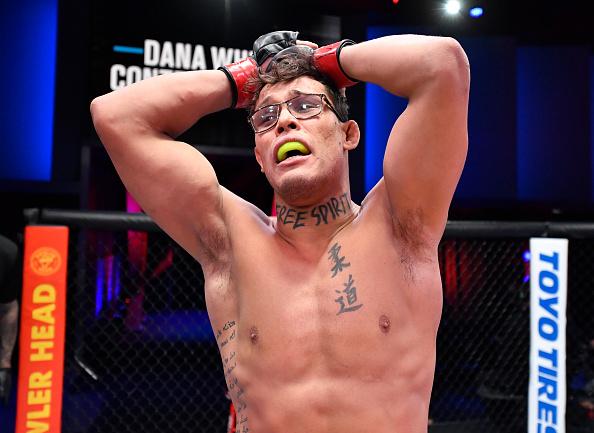 Getting a win over a highly respected undefeated prospect is a great way to announce your presence, especially in a sport where hype can create opportunity. He also recognizes the importance of entertaining the fans and showing them that he’s the type of fighter that they can’t miss. Creating a reputation as the next big thing in the division is what Borralho sees as the perfect first step in his UFC career, and that’s what he’s aiming for on Saturday.

“I’m here to make a really good statement in this division, but I know I can’t fight the guys in the rankings right now because I’m new,” Borralho said. “So I want them to know me and know there’s a new guy in the division, a new breed and you got to be worried about, that’s for sure.”