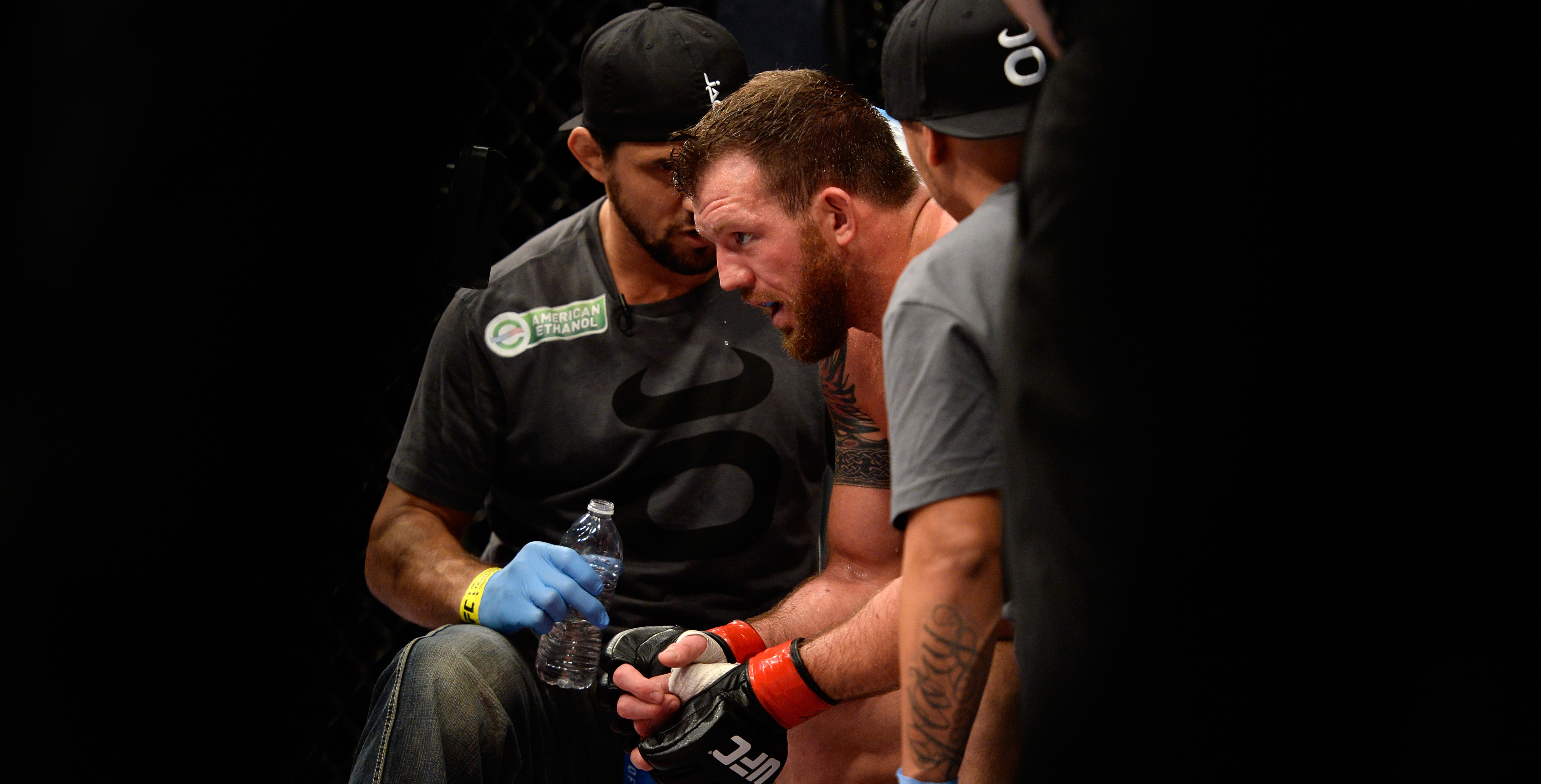 BANGOR, MAINE, August 16 – It wasn’t a fight that will end up on any year-end “Best of” lists, but Ryan Bader’s five-round unanimous decision win over Ovince Saint Preux in the main event of the UFC’s first visit to the state of Maine Saturday night at the Cross Insurance Center might just be the one that pushes Bader over the hump in a career in which he’s previously fallen short in the big fights.

“It was a tough fight, really tough,” Bader, winner of three straight, said. “I had to rely on my takedowns at the end.”

Before the first minute of the fight was over, Bader had put Saint Preux on the deck and was working from side control. OSP worked hard to escape, making it back to his feet with three minutes left. A thudding kick followed to let Bader know that he was ready to go, but a wild swing moments later was met by a hard counter from the Arizonan, who ended the round with another takedown. 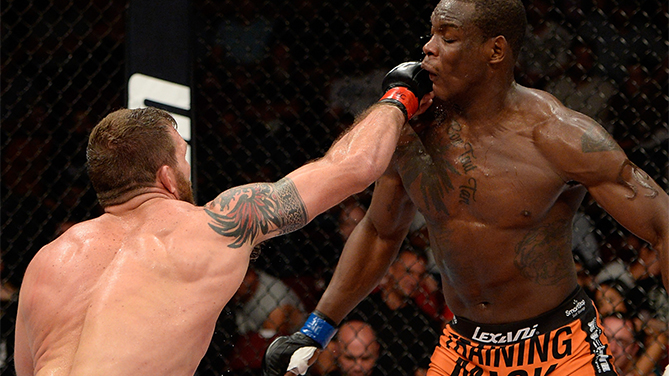 Saint Preux tried to time Bader’s rushes in round two, but his shots were just missing the sweet spot. He was staying busier though, putting Bader in the role of counterpuncher when not looking for a takedown. And with Saint Preux’ takedown defense holding up until a late flooring by Bader, he had a solid round.

Bader got aggressive again in round three, with a takedown against the fence in the second minute serving him well. Midway through the round, Saint Preux got up, but he was slammed back to the mat, not to rise again until the final minute, and even then, Bader stayed locked on, only to release his grip at the horn.

Entering the fourth round for the first time in his career, Saint Preux got off a nice 1-2 on Bader early in the frame, but he wasn’t being active enough to change the course of the fight, and Bader’s takedowns – or at least the threat of them – kept the former Ultimate Fighter winner ahead.

Turning the tables briefly in the final round with a takedown of his own, Saint Preux was showing that he hadn’t thrown in the towel, but after the two rose, it was Bader with a throw to the mat that let the Knoxville product that he wasn’t going to let this fight go south on him. And despite getting bloodied in that final frame, for Bader it was a small price to pay for the victory.

With the win, Bader ups his record to 19-4; Saint Preux, who saw a five-fight winning streak snapped, falls to 16-6.

After a highly-controversial decision loss to Diego Sanchez in his last fight in June, England’s Ross Pearson took the judges out of the equation in his co-main event bout against Gray Maynard, stopping the two-time title challenger in the second round.

“I’m ready for the best, bring it,” Pearson said. 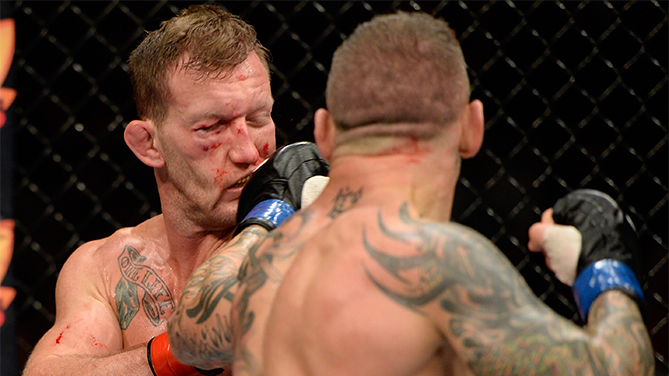 fight. Maynard switched things up a bit with a quick takedown, but Pearson didn’t stay grounded long, and once he got up he tagged Maynard with a few hard shots to the head. With a minute left, Maynard got his second takedown, this time keeping his opponent down a little longer. Pearson did rise fairly quickly though, scoring with some kicks before the horn.

The nip and tuck action continued into round two, but Pearson broke things open soon enough, hurting Maynard with a short right and then dropping his opponent with a left-right. The follow-up barrage of strikes brought in referee Keith Peterson to stop the fight at the 1:35 mark.

Things didn’t look too good for Tim Boetsch early in his middleweight matchup with Brad Tavares, but in the most important fight of his career – in front of his hometown crowd, and after a 1-3 run in his last four bouts – the Lincolnville, Maine native delivered, stopping Brad Tavares in the second round.

“This is one of the better feelings I’ve ever had in my life,” Boetsch said. “This is incredible.” 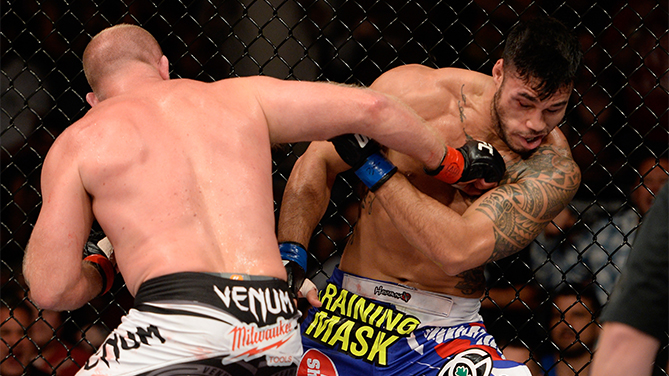 Tavares shucked off Boetsch’s takedown attempt to start the fight, pushing “The Barbarian” to the fence. After a spell there, the two broke, Boetsch looking for the takedown again. Tavares’ defensive continued to be solid as he locked up with his opponent, and his offense wasn’t bad either as he opened a cut on Boetsch’s forehead. In an ensuing scramble, Tavares briefly hit the deck and Boetsch got off some strikes, getting the crowd back into the fight. Tavares recovered quickly, pinning Boetsch to the fence, where he fired off knees to the body and head until the bell.

Remaining sharp in round two, Tavares controlled the action at long range and at close quarters, and he shook off Boetsch’s best punch of the fight – a flush right hand to the jaw. After a stall against the fence, referee Kevin MacDonald broke the two fighters, and then out of nowhere, Boetsch struck. First it was a left hook that dropped Tavares, then as the Hawaiian tried to clear his head, a right sent him down once more. This time the follow-up shots brought in MacDonald to halt the fight at 3:18 of the round.

“I was throwing hard,” Boetsch said. “I knew if I landed, that was all it was going to take.”

With the win, Boetsch improves to 18-7; Tavares, who was stopped for the first time in his career, falls to 12-4. 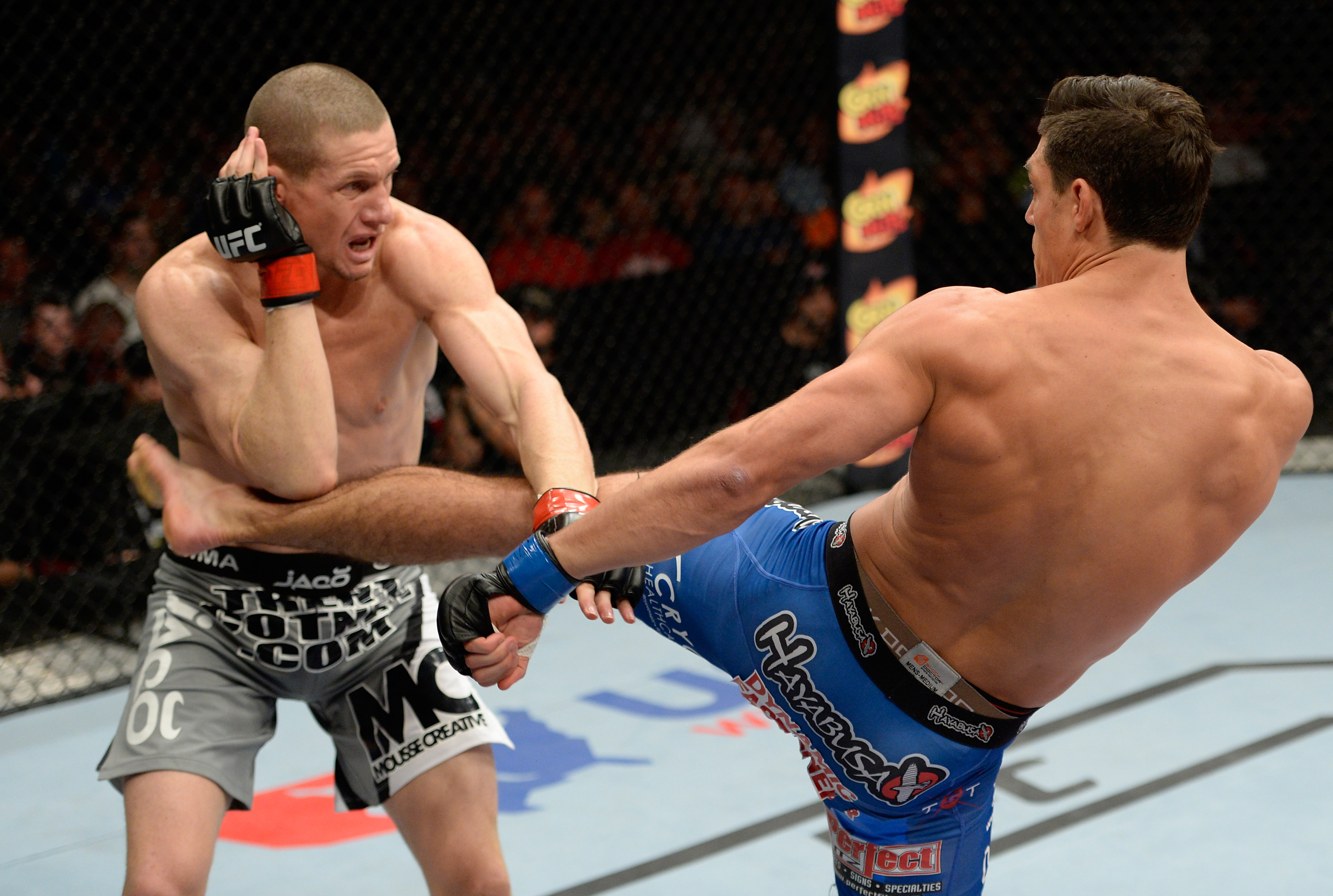 out veteran Seth Baczynski in the first round.

After a slow start, the fight heated up midway through the opening round, with Baczynski (18-10) scoring a flash knockdown on the newcomer and then putting Jouban on his back. After taking some ground strikes, the two rose, Baczynski landing with some hard shots and Jouban (10-2) answering with plenty of his own. As the two traded against the fence, it was Jouban who stuck with the finisher, a short left to the jaw that put Baczynski down and out at 4:23 of the opening stanza. The referee was Keith Peterson.

In an entertaining heavyweight scrap, Shawn Jordan halted a two-fight losing skid with a third-round TKO of Jack May. 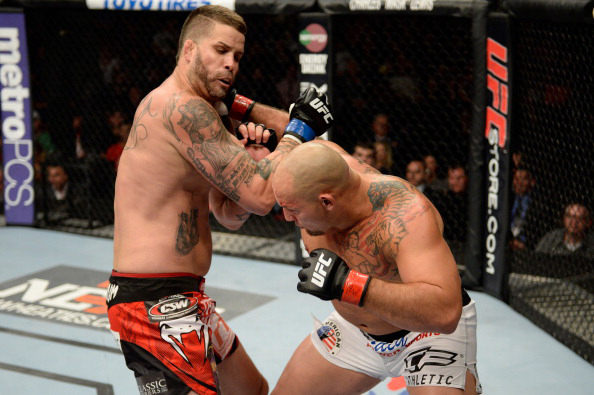 The first round was an interesting one, as the six-foot Jordan (16-6) tried to get inside on the six-foot-eight May. May was able to keep his distance and stay busy for much of the frame, but Jordan had success during close range exchanges, and in the final minute he was able to take May down, nullifying his opponent’s height and reach advantages.

A left hook by May (7-2) landed solidly early in round two, cutting Jordan over the right eye. Moments later, the Californian caught Jordan against the fence and unleashed a series of unanswered blows. Referee Dan Miragliotta closed in, but Jordan swung back and took May back to the mat, buying himself some valuable time. With 90 seconds left, Jordan briefly got the mount position, but May got loose. He wasn’t able to get back to his feet though, allowing Jordan to keep the upper hand.

Jordan got the fight to the mat early in the final round, subsequently taking May’s back, where he fired off strikes to the head. May tried his best to escape, but it was to no avail, as another barrage of punches brought in Miragliotta to halt the fight at the 2:03 mark. 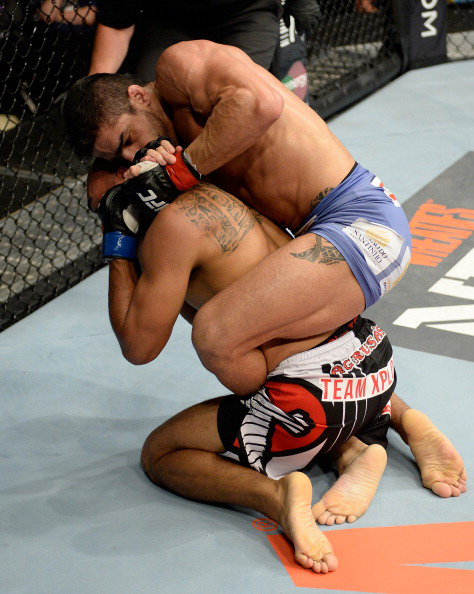 Former lightweight standout Thiago Tavares made an immediate statement in his new weight class at 145 pounds, as he dominated, then submitted, Robbie Peralta in the first round.

From the sound of the opening horn, Peralta was forced to play defense, whether it was trying to avoid Tavares’ takedowns or his ground attack. And while Peralta was game, on this night he had no answers for Florianopolis, Brazil’s Tavares, who finally sunk in a rear naked choke that produced a tap out at 4:27 of the first round.

The newly minted featherweight ups his record to 23-5-1; Peralta, who saw a two-fight winning streak snapped, falls to 18-5 with 1 NC.