Ready for Anything, Nelson Preps for Cro Cop

“A thing I've always said is, 'once you fight me, you'll never want to fight me again.'" - Roy Nelson 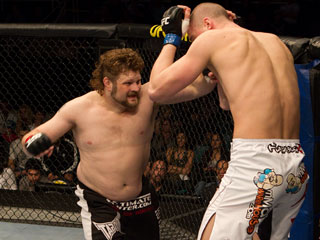 It took just over seven years of being a professional in the sport, a case of walking pneumonia and a former UFC heavyweight champion, but Roy Nelson’s cardio looked bad in a fight. For all the haters and harpies of his trademark tummy, UFC 130 was really a unique experience seeing “Big Country” gassed in the second and third round while being outwrestled by Frank Mir. The Ultimate Fighter season 10 winner knows best how uncharacteristic his performance was, he’s owned up to it and he is ready to move on from it.

“I got the walking pneumonia a week after I went to Canada for the Expo from basically touching dirty fans,” semi-jokes Nelson. “My whole fight career, I always give you 100%. I usually have more cardio than the other guy. With this fight, I hit a wall and that's what happens when you're not up to 100%. Afterward, it is easy to blame the way I look or the color of my hair - there's always something else to blame. Going into the fight against Frank, I was going up against a former champion. I wasn't feeling good, but I was feeling confident. How do we get paid? We get paid to fight, so I went in there and did the best that I could. It went better for Frank that day.”

At 35 years old and a veteran of 22 pro fights spread across numerous organizations, Nelson is focused on entering the Octagon for the fifth time and his future past that. “If I lose I'm going into the gym to become a better fighter and if I win I'm going into the gym to become a better fighter,” says Nelson, owner of a 16-6 overall record and a 2-2 UFC slate, with back-to-back wins followed by back-to-back losses. “A thing I've always said is, 'once you fight me, you'll never want to fight me again.' I believe that's true from all the way from dos Santos, Frank and to anyone I've beaten before. If you're going to fight Roy then you need to bring all your guns because you're going to be in a war.”

The Las Vegas native’s next Octagon appearance will be at UFC 137 on October 29th when he will square off against international fan favorite Mirko Cro Cop. Nelson knows exactly how much weight Cro Cop’s name and 27-9-2, 1 NC career carries if one has a win over him. “I think it's cool because you have to beat a legend to become a legend. He's definitely beaten some of the top guys. He's a guy that if you can beat him then you know where you stand in the scheme of things with the rest of the heavyweights in the world.”

Cro Cop and Nelson are in a similar position coming into this fight. Both are well regarded heavyweights who have faced some of the best their division has to offer and both are on a two fight losing skid. For Cro Cop, Mir and Brendan Schaub caught the former PRIDE star with about a minute left in their respective fights. For Nelson, the decision loss to Mir followed the decision loss to Junior dos Santos at UFC 117. The most important thing for both fighters is to walk out of the Octagon with a win, and Nelson will do anything to make sure it’s him.

“In this fight, I'm coming off two losses,” he explains. “The first fight I lost I was fighting for a shot at the world title and the second fight I was fighting against a guy who has already had the title twice. For me, losing to those guys and now coming out here, it's basically that I need to get back into the win column. I don't care if it is the ugliest fight in the world, I just need to get the W. Once you get the W in the win column then you can start making your way back to the title. But first you need to get that W because you can't climb up the ladder while you're losing.”

Fighting an opponent as famous as Cro Cop does have an upside of generally knowing what to expect from him. The Croatian striker has been surgically knocking out opponents for well over a decade, and from his time as a professional kickboxer to his glory days in PRIDE to his nine fights inside the Octagon, Cro Cop continues to more or less have the same well-documented strengths and weaknesses. Nelson believes he’s figured out his opponent stylistically and knows how to counter it.

“I think Mirko is going to stay on the outside and pick his shots with his left hand and look for his kicks,” estimates Nelson. “That's what Cro Cop is really good at. He sucks you into a lullaby and you put your guard down and then BAM that's where the kick or the punch is. For me, I have to be patient and look for my shots or look for the takedowns. I have to punch him in the face, but I have to be patient. Mirko is a patient man and he waits for that one mistake and he capitalizes on it.”

“Big Country” does have two Knockout of the Night bonuses that both occurred in the first round, but Nelson is ready to go all three rounds with Cro Cop. “With every fight, I prepare like it's going 15 minutes,” states Nelson, well aware that he might need to go into the later rounds in search of another bonus, as all but one of his foe’s losses in the UFC have occurred in the third. “If it gets done earlier then it's like going to work and punching out early because you got all your work done. Mirko is very steady and elusive when it comes to striking and he stays out on the perimeter and picks his shots. He is a guy you have to hunt down, and it might take 15 minutes to get there.”

This Saturday, the mullet, the beard and the belly of “Big Country” will take to the cage against feared fists and feet of Cro Cop.

“He is one of the most feared strikers when it comes to matchups, but one thing that people don't like about fighting me is that I'm not afraid to bang with you,” asserts Nelson, eager to put his crushing right hand and black belt in BJJ to use to get back to winning, climbing the ladder, and proving the naysayers wrong. “You not only have to be the better striker, but you have to see who hits harder. Another thing is that I have a good ground game. It's not a pure classic 'grappler vs. striker' because this grappler is willing to bang with you.”