Just a few short days before making his sophomore appearance in the UFC’s welterweight division, Rafael Dos Anjos feels healthier and happier than he has in quite some time.

After rising to the top of the lightweight division with a lopsided upset win over Anthony Pettis at UFC 185 and successfully defending the title nine months later in the final UFC fight of 2015, things went sideways for the Brazilian veteran in 2016.

He lost the strap to Eddie Alvarez during International Fight Week and came out on the wrong side of the result against the surging Tony Ferguson just four months later as he looked to quickly return to the win column. To make matters worse, the process of getting down to the lightweight limit was taking a serious toll on Dos Anjos, prompting the former titleholder to relocate to the 170-pound weight division.

His first assignment came in June opposite former Strikeforce champ Tarec Saffiedine, a Top 10 opponent and sound litmus test for his maiden voyage into the welterweight waters of the UFC, and though he emerged victorious, competing in Singapore meant an extended amount of time away from home for the dedicated family man.

“Compared to my last fight, I feel I’m in better shape and I didn’t have to leave my family for so long; only four or five days this time,” said Dos Anjos, who squares off with Neil Magny in a crucial welterweight pairing this weekend at UFC 215 in Edmonton.

“When I fought against Ferguson, I was in Mammoth for four weeks and then I went two weeks before the fight to Mexico City, so that was six weeks of being away from my family. In Singapore, I had great support there from Team Evolve, but I still had to leave my family behind and that’s always tough.

“Being in Edmonton, I don’t have any issue with the altitude, it’s close to my house – it’s only a four or five-hour flight, which is not that crazy,” he added. “I get to come on Fight Week no problem and finish my whole camp at home with my family.”

In addition to having been able to stay close to home for the duration of his fight camp, Dos Anjos also enters Saturday’s swing fight on the Pay-Per-View main card without the added pressure of a two-fight losing streak that he carried into the matchup with Saffiedine in June.

Although his championship pedigree would likely have bought him some additional leeway had he come out on the wrong side of the results, it wasn’t something the first non-American lightweight champion in UFC history wanted to test.

“I was fighting under a lot of pressure,” he said of his debut. ”It was two losses in a row and I can’t lie, I was feeling a little bit of pressure. That feeling that you ‘have to win’ is not a good feeling, but right now, I had a great training camp, made some adjustments and I feel really good for this second welterweight fight.” 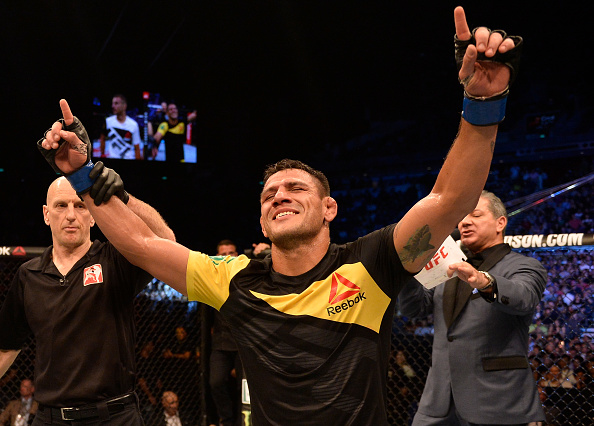 Saturday’s bout is a pivotal matchup in the wide-open division, where Dos Anjos and Magny are two of a number of talented competitors jockeying for better position in the championship chase as current titleholder Tyron Woodley progresses towards full health following his shutout victory over Demian Maia at UFC 214.

What makes the contest even more intriguing, however, is that Dos Anjos almost got the opportunity to jump to the front of the line in his new division shortly after beating Saffiedine, as the UFC reached out to the former lightweight champ to see if he’d be interested in facing “The Chosen One” should his countryman Maia pass up the chance to compete in Anaheim.

“Right after my last fight in Singapore – probably a week later – I got a call from (UFC matchmaker) Sean Shelby offering me the title shot against Tyron Woodley,” explained Dos Anjos. “I was training already and he said, ‘Would you take the fight if Maia doesn’t accept the fight?’ and I said, ‘Of course.’

“Since Maia took the fight, I told him, ‘Hey man – I’m ready to fight. If you have somebody in mind, please let me know; I’m training and I want to fight.’ When this opportunity came up for September 9 in Edmonton, I took the fight.”

While nothing has been stipulated, Dos Anjos admitted that getting asked to be the back-up plan for UFC 214 has him feeling like a shot at the welterweight strap is within reach. And while he’s confident that he has what it takes to topple Woodley and become just the fourth man to earn UFC gold in two different divisions, he’s not looking past his matchup with Magny on Saturday.

“I feel that I’m closer than ever to the title,” he said, “and I think I have what it takes to beat Tyron – I’m an aggressive fighter, I’m going to push the pace and we’re going to fight. I’m looking forward to being a two-division champion real soon, but the next step is Neil Magny and my focus is 100 percent on him.”

And with his first appearance in his new division behind him and his comfort level back where it needs to be, Dos Anjos said fans in “The City of Champions” can expect to see a more aggressive, attacking fighter this weekend at Rogers Place.

“They can expect an aggressive RDA. I will, as always, be walking forward, doing my fight. I’m healthy – I didn’t have any issues this camp – and I feel motivated.