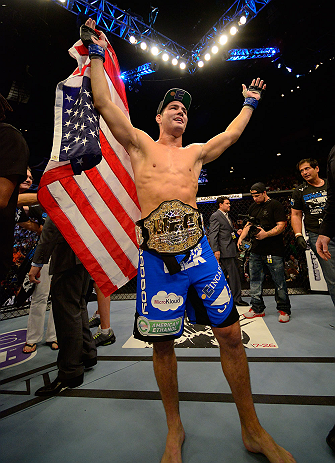 Less than an hour after his charge, Chris Weidman, shocked the world and won the UFC middleweight championship by knocking out Anderson Silva in the main event of UFC 162 on Saturday night, Ray Longo was beaming, but you could see that he was drained as well.

It’s the side of the sport few either see or care about. For eight weeks or more, there is a daily grind associated with preparing for a world championship fight, one that doesn’t just apply to the fighter, but to his coaches and training partners. Tasked with coming up with a game plan that will defeat a man considered to be the greatest fighter of all-time, Longo burned the midnight oil for weeks, consulting with Weidman and his fellow coaches to develop the plan that would do what 14 previous men couldn’t, and that’s beat Anderson Silva.

Talking to Longo before the fight, his intentions for his fighter were clear: Silva can’t get into a rhythm.

“The masterminding of the strategy isn’t going to be a technical thing,” he said. “It’s going to be more of controlling the rhythm and mindset. If you let him (Silva) get into a groove, he’s very, very good. In a way, Anderson is a bully. Once he figures you out, then he’s dancing around and that’s a bad rhythm to let that guy get into. It’s dangerous.”

Yet after a strong start on the ground for the Long Islander on Saturday night, Silva found his way to his feet and began to find that rhythm, dropping his hands and taunting Weidman, daring him to engage in a standup war. As Weidman walked back to the corner, the normally unflappable Longo admits to being concerned about what was going on despite the confidence still being shown by his fighter.

“A little bit,” he said. “But we were gonna fix that up after the second round. I think what Anderson underestimated was Chris’ reach. And we knew he had a long reach; we just knew we weren’t gonna find out until we were in there. There are certain things that you’re gonna find out when you’re in there with him. He felt it, and I think that’s why you saw the confidence.”

Between rounds, Longo reinforced the game plan and reminded Weidman not to get rattled by Silva’s showboating antics. He also gave him some key technical advice.

“After the first round, I say ‘listen man, you know it (the showboating) is all bulls**t,” he said. “Let’s just keep doing what we’re doing. If he wants to lose a fight like that, that was it. And I started telling him to punch a hole in his chest; stop chasing his head.”

In round two, Silva kept clowning, and Weidman kept stalking. After taking a shot to the chin, Silva acted like he was wobbled by the punch. Weidman kept throwing, missing a couple shots but eventually clipping Silva with a left to the jaw. Silva fell, and seconds later, Chris Weidman was the UFC middleweight champion.

For Longo, it’s the second time one of his fighters shocked the MMA world, with Matt Serra having done the trick in 2007 when he knocked out Georges St-Pierre for the welterweight crown. It’s affirmation that Longo is one of the most underrated coaches of the modern MMA era, and he will hopefully garner more attention in the future for his talents. But anyone who knows the New Yorker is well aware that he’s not about the spotlight, just his fighters. And seeing them be successful, that's enough for him.

“It’s surreal for me,” he said. “It fulfills my legacy, I think. That’s it. I’ve got nothing else to do. (Laughs) They’re two local kids that had their first pro MMA fight with me, and bringing them to the championship against two of the best, pound-for-pound, and winning by knockout, I’m a happy man tonight.”

So what went through Longo’s mind when that left landed and Silva fell?

“I have no recollection,” he laughs.