Ray Faces Opportunity Of A Lifetime

“I’m seeing this as the opportunity of a lifetime,” Ray said. “Saturday night, I’m going to beat Michael Johnson and then aim for the top 15 guys."
By Gavin Porter, on Twitter: @PorterUFCnews • Oct. 24, 2019

The opportunity of a lifetime, that’s what Stevie Ray is in Singapore to capitalize on.

The lightweight fighter from Scotland believes his showdown with Michael Johnson is his chance to get a win over an opponent with significant notoriety.

And he’s not going to let the moment slip through the cracks.

“I’m seeing this as the opportunity of a lifetime,” Ray said. “Saturday night, I’m going to beat Michael Johnson and then aim for the top 15 guys. Pretty much mark my name and let everybody know that I’m the real deal and I’m coming for the top 15.”

The reason that Ray is so excited to scrap with a competitor like Johnson is that “The Menace” has tangled with and defeated some of the top fighters in the division, such as Tony Ferguson.

“Michael Johnson’s been as high as fifth in the world. He’s knocked out Dustin Poirier, who just fought for the title. He beat Edson Barboza, he’s been in there with Nate Diaz and he was doing well against Khabib [Nurmagodmedov] until he got taken down.”

With Johnson’s history of taking on top contenders and champions, it’s natural that Ray feels like the underdog in the upcoming matchup. But he couldn’t be happier to be flying under the radar. 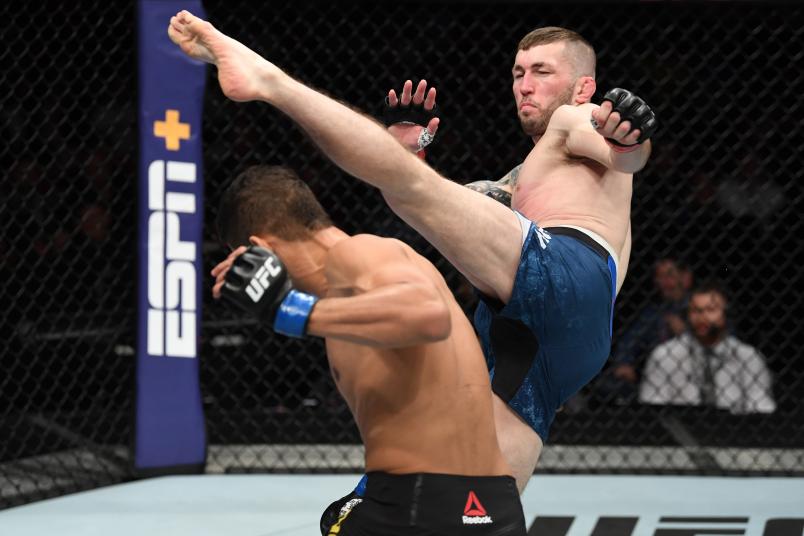 STOCKHOLM, SWEDEN - JUNE 01: (R-L) Stevie Ray of Scotland kicks Leonardo Santos of Brazil in their lightweight bout during the UFC Fight Night event at Ericsson Globe on June 1, 2019 in Stockholm, Sweden. (Photo by Jeff Bottari/Zuffa LLC/Zuffa LLC via Get

“I love when I’m the underdog and I’m fighting a big name,” Ray said. “I would say that I’ve probably done it twice before when I’ve fought a real big name and I’ve been the underdog. Both times I’ve came out and won - those names were Ross Pearson and Joe Lauzon. So, I’m looking to make it a third time against Michael Johnson.”

Ray is expecting Johnson to bring the heat and to show up to Singapore Indoor Arena with the intention of putting on a performance that fans will appreciate.

And if Johnson does come with the same energy that Ray is coming with, “Braveheart” thinks the showdown will go down as Saturday’s Fight of the Night.

“I feel like it’s going to be Fight of the Night,” Ray said. “It’s two guys that are literally going to try to take each other’s head off. Michael Johnson comes and tries to knock you out and I’m going to come and try to knock him out. I believe it’s going to be an exciting fight.”

If Ray’s previous fights are any indication of what he will bring on Saturday, fans can expect to see him take risks and leave it all in Octagon.

“I’m here to battle and I’m prepared to either get the knockout or get the job done in a three-round war.”

You’re not going to want to miss Ray put it all on the line against Johnson. Subscribe to ESPN+ to watch the fight, which starts at 8am/5am ETPT.