Ray Borg planning to make an impact in flyweight division 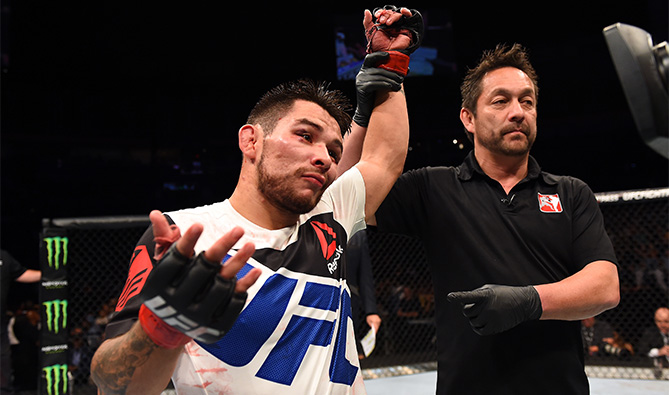 After nearly two years on the UFC roster, Ray Borg has made an impression on the MMA world, rising to the 12th spot in the flyweight rankings. But his mindset hasn’t changed much.

He still just wants to fight. A lot.

“It feels like I’ve been in here for a while, but I think it would have felt a little bit more like two years if I was fighting more consistently,” Borg said.

That’s what it’s like being 22 years old. No matter how much success you’ve had, there’s no time for sitting around and soaking it all in. In fact, despite three consecutive wins over Shane Howell, Chris Kelades and Geane Herrera, two submissions and two Performance of the Night bonuses, Borg feels like his impact hasn’t really been felt yet.

“I think I’ve got to start knocking people out,” he said. “The fans want to see me knock people out more often.”

Submissions and post-fight awards don’t hurt either, but if it’s knockouts that “The Tazmexican Devil” wants, he gets to start working on that project this Saturday when he faces fellow rising star Justin Scoggins in Las Vegas. After that, he’s aiming high.

“I have a really good ability to take on whatever comes at me and rise to the occasion, so I feel like once I beat Scoggins, they’ll offer me a couple high level flyweight fights, maybe the winner of (Joseph) Benavidez and (Zach) Makovsky,” Borg said. “And I think once they start to see that I can beat higher level fighters, they’ll go ‘all right, maybe he’s ready for a title shot.’ And I think when that time comes, I’ll be comfortable in the cage and I think it’s going to go well.”

Such an ambitious plan would alarm some, but if you’ve seen Borg fight, you’ll understand that it’s pretty realistic. Able to handle himself wherever the fight goes, Borg truly excels on the mat, and even though his record currently sits at 9-1, many believe he should have gotten the nod in his UFC debut against Dustin Ortiz in April of 2014. But what separates Borg from other young up and comers is his ability to be unaffected by the bright lights surrounding the Octagon. In his case, when it’s time to fight, it’s time to fight.

“I have the ability that when that cage door closes, nothing else matters,” Borg said. “There’s hype before the fight and people hold you to these expectations to do so well, so there’s a lot of pressure, and it gets to everybody. But I have this very strong ability that when it comes to fight night, I just absorb all of it. I take it all in and I perform very well under any type of pressure or situation. I think it’s just the fight in me. I’m very athletic, I’ve got a good head on my shoulders, but deep down inside, I had some pretty strong roots growing up and I just have that mentality to fight. So once that cage door closes and I realize I’m in a fight, it’s no longer fighting for a title shot or for the spotlight, it’s fighting to win and to survive.” 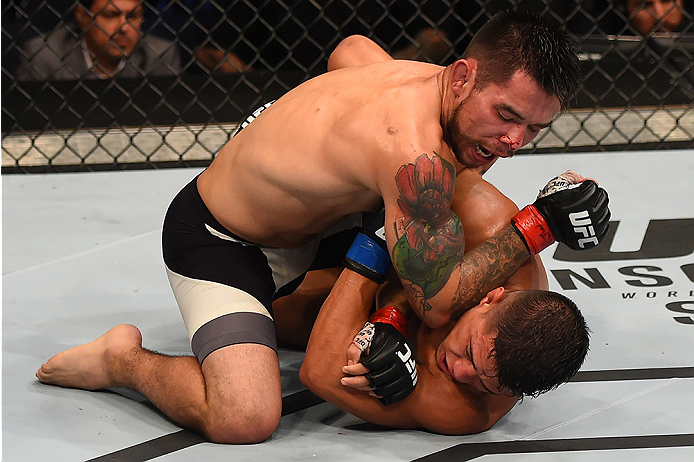 That attitude may also come from his gym in Albuquerque, Tom and Arlene Vaughn’s FIT-NHB. They’re not the biggest gym in the ABQ, but they produce plenty of hard-nosed, to-notch fighters.

“We’re a gym that’s really founded around New Mexico,” Borg said. “I don’t care what Jackson’s does down the street, and I’m not the whole anti-Jackson type person; I’m focusing on me and my team. But Jackson’s has a lot of imported fighters, and not to say they don’t have a hard background, but growing up in Albuquerque is pretty tough, and everybody here is homegrown and had to fight through some type of struggles in their life, so it makes you really, really hard-nosed and big-hearted with a great determination to win and succeed.”

Ray Borg is winning and succeeding. Now it’s time to take that next step.

“In 2016, everybody can expect me to come out of my shell,” he said. “I was a little quiet when I came into the UFC, but that’s just how I am. I’m not saying I’m coming out of my shell Conor McGregor style, but you can count on me to spark up a conversation and come out of my shell fight wise. I’m going to showcase my entire game and the whole flyweight division is going to realize that I’m the real deal and I’m probably the biggest threat to Demetrious Johnson.”